Hillary Clinton was born on October 26th 1947. An Illinois native, Hillary Rodham graduated from Wellesley College in 1969, where she became the first student commencement speaker. She then earned her J.D. from Yale Law School in 1973. After a stint as a Congressional legal counsel, she moved to Arkansas, marrying Bill Clinton in 1975. She co-founded Arkansas Advocates for Children and Families in 1977, became the first female chair of the Legal Services Corporation in 1978, and was named the first female partner at Rose Law Firm in 1979.
The First Lady with The Battersby Duo at The White House 1997 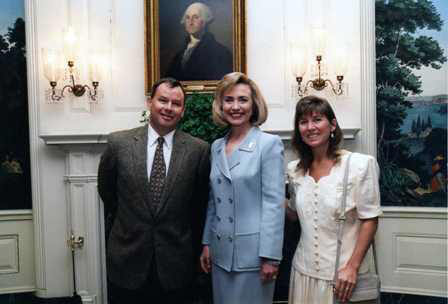 Hillary Clinton has been fighting for equal rights since she first met Dr. Martin Luther King at 15 years old in 1962. The civil rights pioneer preached a sermon titled "Sleeping through the Revolution." In his speech, Dr. King said too many Americans were like Rip Van Winkle, snoozing through the changes happening around them."

Carl Bernstein, of The Washington Post said, "If there is a single developmental thread of Hillary's political, religious, and social development, it is her belief and determination that the tragedy of race in America must be made right. Hillary formed many of her closest friendships with blacks; her mentor was Marian Wright Edelman, founder of the Children's Defense Fund. Later, in the White House, Hillary chose several African Americans as senior aides."

Hillary Clinton has spent her life fighting for equality and has been a vocal advocate for LGBT rights. When Republicans recently pushed "religious freedom" legislation that could allow businesses to deny services to LGBT people, Hillary stood up against it. Hillary Clinton supports marriage equality and made clear that she wanted the Supreme Court to rule in favor of same-sex couples being guaranteed that constitutional right, which they did on June 26th 2015. Mrs. Clinton made the following statement: "Along with millions of Americans, I am celebrating today's landmark victory for marriage equality, and the generations of advocates and activists who fought to make it possible. From Stonewall to the Supreme Court, the courage and determination of the LGBT community has changed hearts and changed laws."

As First Lady of the United States, Hillary Clinton, attended "The 4th World Conference on Women" armed with a speech about Human Rights that would catapult her onto the global stage. The speech she made that day in September 1995 was the speech that launched a movement.

In her speech , Clinton argued very forcefully against practices that abused women around the world and in the People's Republic of China itself, declaring "that it's no longer acceptable to discuss women's rights as separate from human rights. Speaking out for women was imperative." Delegates from over 180 countries heard her say: "If there is one message that echoes forth from this conference, let it be that human rights are women's rights and women's rights are human rights, once and for all."

Mrs. Clinton went on to say: "We need to understand there is no one formula for how women should lead our lives. That is why we must respect the choices that each woman makes for herself and her family. Every woman deserves the chance to realize her own God-given potential. But we must recognize that women will never gain full dignity until their human rights are respected and protected."

Musician Paula Boggs who fronts the Paula Boggs Band wrote the following video/song because, in her own words "The Newtown, CT tragedy inspired me to write 'Carnival of Miracles' but it's also a song shaped by a veteran's love for country knowing we can and must do better as a nation and planet. We humans rise or fall together and despite our many divisions, we are more alike than different. As Dr. King and others said so eloquently, 'none of us is free until we are all free.'

"There is no easy walk to freedom anywhere, and many of us will have to pass through the valley of the shadow of death again and again before we reach the mountaintop of our desires."
Nelson Mandela

Freedom means the right of people to assemble, organize, and debate openly. It means respecting the views of those who may disagree with the views of their governments. It means not taking citizens away from their loved ones and jailing them, mistreating them, or denying them their freedom or dignity because of the peaceful expression of their ideas and opinions.

"It's not about being more powerful than men- it's about having equal rights with protection, support, justice. It's about very basic things. It's not a badge like a fashion item." Annie Lennox

"In the US, we recently celebrated the 75th anniversary of Women's Suffrage. It took 150 years after the signing of our Declaration of Independence for women to win the right to vote. It took 72 years of organized struggle, before that happened, on the part of many courageous women and men. It was one of America's most divisive philosophical wars. But it was a bloodless war. Suffrage was achieved without a shot being fired" Hillary Clinton wrapped up her 1995 speech at "The 4th World Conference on Women," with a standing ovation and thunderous applause from the 2700 women and men in attendance from around the world that day.

"I'm tired of women being shamed, and blamed and dismissed." Hillary Clinton says. "It's not complicated: When you attack women's health, you attack America's health. Republicans don't seem to have a problem with that. I've been fighting for women and children and families, my whole life."

Whether or not Hillary Rodham Clinton is chosen to be the Democratic Nominee, it's important to give her credit for the extraordinary accomplishments she's achieved throughout her career. We salute her genuine devotion to advancing human and women's rights, sponsoring "The Fair Pay Act" of 2009, championing Women's health rights, her support of marriage equality and finally setting such a high bar for women in public service. Hillary Clinton is an exceptional woman.