I always thought behavior and psychometric assessments were bogus; they just irked me and felt dubious.

And then one day I was at a conference, and a woman asked me if I'd like to take a free behavior assessment. I was tired of mingling, the woman was kind, and I didn't imagine, in this case, that any harm could come of it. In fact, I was excited to hear the potentially hilarious results.

I sat down at her laptop and she readied the test. It was a two-page assessment, each page featured a unique prompt followed by three columns of adjectives. Each adjective had a checkbox next to it. The prompt on the first page went like this: Please read the words in the list below and check those that you feel describe the way you are expected to act by others.

So I went through and checked the boxes that I felt described me. The layout of the page looked something like this: 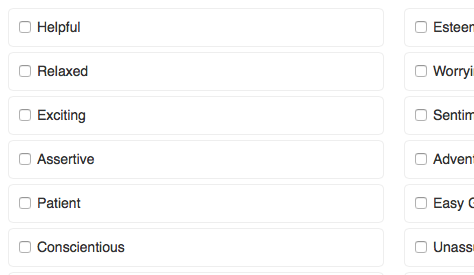 When I got to the second page, I noticed all the same adjectives were on it, just randomly reorganized. The checks I'd made on the previous page were nowhere in sight. This time, though, the prompt was different: Continue by reading the words in the list below, now checking those that you yourself believe really describe you.

When I finished doing just that, I was done. It seemed way too simplistic to be helpful in any way, and I told the woman I had always been skeptical of stuff like this. She retrieved the computer, punched a few keys, and narrowed her eyes to review my results.

Then, she started telling me things that were spot on She said, "You are high energy, but your body needs a lot of rest to maintain your pace." I nap every day, sometimes twice. "In crowded workplaces, you distract others with your inability to focus on a single task for an extended period of time." Yep. "You are deeply empathetic and able to read others emotions better than most." Well, I hadn't ever thought of that, but I could see where she was coming from. "You have a strong desire to be liked." Yeah, my therapist already told me that.

Anyhow, she went on and on, and her insights were pretty damn good. My colleagues, Corey and Mitch, were watching, shaking their heads up and down at every turn. I was impressed, but not sold, so I asked her if Mitch could take the test, too. I know Mitch and Corey both very well, so I wanted to see if Mitch's results were anywhere near reality. When Mitch finished the assessment, she read back what, to me, sounded like she was reading a journalist's insightful description of somebody in a magazine.

It was amazing. But I didn't think about it too much once the conference was over. I just went back to work.

Then my buddy, Brian, called me. We'd worked together at a different start-up before, and he had just switched jobs and was now selling access to the same assessment from a company called ADVISA. This company had been helping teams grow with tools like this for over 30 years. Brian told me he could help me make better hires by using the assessment alongside our qualitative interviews. More importantly, Brian's consultation was about properly leveraging tools like the Predictive Index.

He couldn't have caught me at a better time, as Lesson.ly had just raised $1.1 million and needed to double the size of our 10-person team in short order. I didn't promise him I would buy, but I did promise to hear him out. He suggested we get started by sending the survey to all of my colleagues. From there, he believed he could read the results and tell me which people should be in which roles, based on the behavioral data the test would generate.

Brian and I met up for beers once the team had all finished the test, and he started to tell me about all of the people that, at the time, I already knew very well. He had never met them, but it sure sounded like he had. Every now and then, one of his insights didn't connect, but most of the time he was right on target. Brian was very clear that the test results weren't tarot cards; that is, they are general indications of how a person may or may not enjoy a given role -- not clear, unwavering predictions of the future. I bought access to an unlimited number of surveys just under a week later.

They also help us post-hire, when myself and other managers need to figure out what style of recognition and feedback person X prefers. You see, X might love public praise, while Y thinks it's embarrassing and would much prefer a private email expressing gratitude. That is, the survey gives us clues to which person prefers which style.

In short, I am a believer in the Predictive Index; it's still the only one I have tried, so I can't comment on the rest, though I hear there are plenty others out there. I think the tool has made our business better and our people happier and more productive; since making these things happen is my job, I am grateful it exists.

CEO and Founder of Lessonly