Shock, disbelief and fear -- these are a few of the emotions that I felt when someone asked if I was gay for the very first time. I still remember every detail of that moment as if it were yesterday. I was sitting in a cramped desk in civics class in high school, and one of my good friends posed the question to me. Mortified, I quickly responded no, and changed the subject. This was the first of many moments that I attempted to hide behind the facade of a straight man in order to avoid the potential ridicule and judgment from my peers, community and family. From that day moving forward, I actively examined every aspect of my life in order to modify any behavior that could potentially be perceived as gay.

I begin to immerse myself in religion in an attempt to "pray the gay away." There are individuals in society that still believe wholeheartedly that homosexuality is merely a choice, and I bought into that way of thinking. Each day I followed a path that was not meant for me in order to conform to a way of life that the church deemed acceptable. However, I failed time and time again, and I started to blame myself for the countless setbacks in ridding myself of my attraction to guys. I felt deserted by a God that was supposed to fix me. I felt powerless, abandoned and afraid to seek help or guidance. As I entered college, I decided to continue the charade and lock all of these emotions and feelings deep inside. I wore a mask of confidence and security in order to deceive those around me. Looking back on those years, I realize that not a single person had an opportunity to get to know the authentic me.

After graduation, I began working for an organization in Charlotte, NC that is supportive of diversity and inclusion, and I had several LGBTQ colleagues in my office. As I began to build meaningful relationships with my co-workers, I found someone that I felt comfortable sharing my internal struggle with at an event one night. This was the beginning of a very long and bumpy transition into revealing the intricate details I kept hidden for so long to the people I care about. Uttering the statement, "I'm gay" to someone initially was very difficult, but thankfully it got easier. Each time I told someone, I felt a weight lift from my shoulders. It was truly a liberating experience. However, I knew I had a long journey ahead of me because I still had to tell my family. I grew up in a small, rural town in Louisiana, and our community is very conservative. I saw story after story about kids losing their families after coming out, so I was terrified of the same fate. I thought about writing an email or a letter and sending it to everyone, but I never had the courage to do so. Little did I know that someone would expedite this process for me.

When I got to work on a July morning in 2013, there were two letters on my desk, which is odd because I never got mail. The mailing address was barely legible, but I recognized the zip code 71037. Honestly, I expected yet another wedding invitation from a friend back home, so I was not at all prepared for what I was about to read. As it turns out, the letters were from an anonymous source from a church back home outing me as gay to my parents. 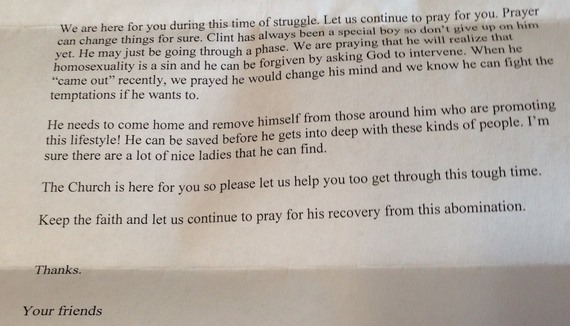 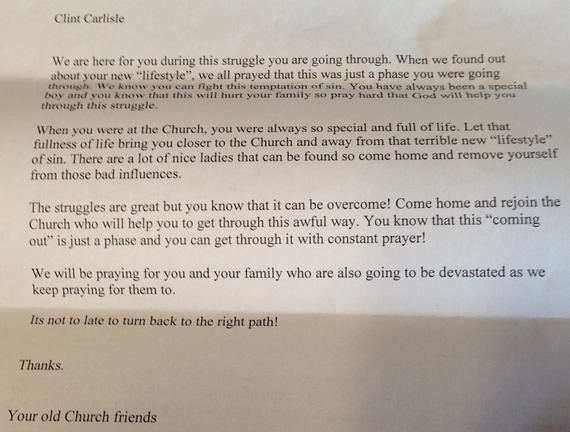 I closed my office door and stared at the paper in disbelief. How could someone that I did not know reveal something so personal about me? The two people that raised me and supported me through it all now knew I was gay, and I did not have the opportunity to tell them. I pictured them reading the words in the letter, and I was sick to my stomach. I cried for nearly 30 minutes until a co-worker discovered what had happened. I was immediately surrounded by an unexplainable amount of love and support. After recovering from the initial shock of the letters, I had decided that I would call my mom when she got off work in hopes that she had not read the letters yet. I tried to say the words out loud over and over again that afternoon, but there is no amount of planning that one can do to prepare for this moment under these circumstances.

At around 6:00 pm surrounded by friends and co-workers for support, I called my mom. After a few seconds of casual conversation, I just blurted it out, "Mom, I'm gay!" The other side was quiet at first, but she started to ask a few questions. She asked if I was sure that I didn't like girls, and I replied, "believe me, I have tried for years, but I know what is in my heart." She then shared her concern for my health and said she did not want me to get AIDS. After I reassured her that I would take care of myself, she said, "Well okay. Who is going to tell the rest of the family?" I was emotionally and physically drained at this point, so I asked if she could tell them. After the call, my friends walked me downstairs to a fire pit, and we watched the hateful words on the two letters slowly burn away. Nervously, I waited for the news to spread unsure of how the rest of my family would take the news. By the end of the day, I received texts from many family members filled with love and support that brought me to tears. 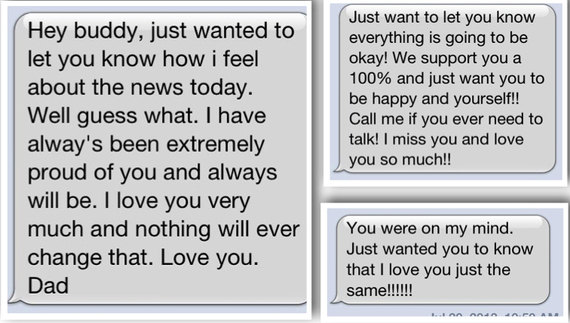 After spending so many years hiding from the truth, I could finally begin living my life to the fullest. Although I did not come out on my own terms, I was very lucky to have the support of family, friends and colleagues. The letters set out to incite hatred, judgment and division within my family, but thankfully the exact opposite has occurred. In an odd way, I wish I had the opportunity to thank those that wrote the letters to my family and me. If it were not for them, I may not be the man I am today. By no means is outing someone acceptable under any circumstance, but it allowed me to finally turn the page of a very dark and lonely chapter in my life.

The story does not end this way for many LGBTQ people. In many communities, religious institutions succeed at tearing apart families. Somehow the many passages in religious texts about love and acceptance are overshadowed by the few about homosexuality and judgment. Parents abandon their children, and many youth commit suicide as a last resort. According to the Trevor Project, "LGB youth are 4 times more likely to attempt suicide as their straight peers, and "LGB youth who come from highly rejecting families are 8.4 times as likely to have attempted suicide as LGB peers who reported no or low levels of family rejection." As another Coming Out Day has come and passed, we have to remind those around the world that they are not alone. They may not be able to come out to their family and friends quite yet, but when they are ready, there are so many people and organizations that are willing to lend a helping, supportive hand. We must also continue to advocate for a more accepting society.

As I look to the future, I find comfort in the fact that society is capable of change albeit slowly at times, and I have seen the perception of LGTBQ people drastically evolve during my short life. This is a result of the countless advocates and organizations working tirelessly on behalf of our community. I owe a great debt of gratitude to the allies in my life for helping me reach the other side of this experience in a positive, meaningful way. I look forward to the day where young people can grow up and no longer feel afraid to live life as their authentic selves. As an individual who experienced this journey at times alone and other times surrounded by love and encouragement, I have made it a priority to share my story and support others when I can. I hope you will too.