I keep running into extraordinary students -- of all ages -- from all over the world, and I think there should be a day set aside every year to honor them for making the effort to learn. In various places around the world students have a day set aside for a number of reasons ranging from political to cultural, but there is no day whose purpose is purely to celebrate the incredible experience of learning.

The inspiration for this momentous idea presented itself several weeks ago at The University of Guelph in Ontario, Canada that hosted the annual retreat of Universities Fighting World Hunger. It was a smorgasbord of inspiration. Hundreds of students and their advisors from around the world -- mostly Canada and the US -- gathered to strategize about domestic and international food security. They were challenged to think about what they can do now and for the rest of their lives. 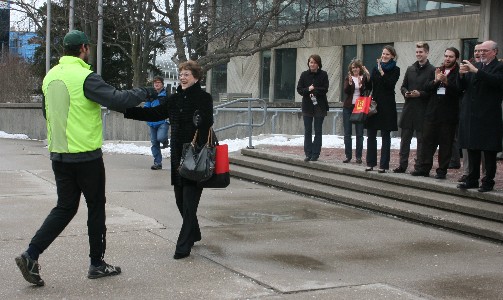 One student, Joe Henry from the University of Alabama at Birmingham, ran 500 miles -- from the Capitol Building in Washington, DC to the front steps of Guelph's University Centre and into the arms of Dean June Henton of Auburn University who founded Universities Fighting World Hunger in 2004 along with a unbelievably dedicated staff and 19 Auburn students who were energized by the idea that, through their own efforts, they could save people from staving to death. UFWH now has chapters on more than 120 college campuses in the U.S., Canada, and Western Europe.

But, the passion to become engaged in advancing the cause of mankind is not only the province of enlightened collegians. A dozen high school students from Guelph who attend John F. Ross CVI (Collegiate and Vocational Institute) are preparing for a trip to Lesotho in southern Africa where HIV/AIDS has devastated the population. They've created their own website called ReachLesotho.com. Four of these incredibly gifted students, Elise, Erin, Madeline, and Vanessa participated in the hunger summit, spending the weekend attending lectures and meeting with executives from the UN's World Food Programme. High school students attending hunger lectures and panel discussions over a weekend. It's almost too much to comprehend. http://www.youtube.com/watch?v=9bm-Wt_EFks.

Some students forge ahead on their own without the support of a group. The Borlaug-Ruan Interns associated with the World Food Prize are an elite group of 16 high school students selected from hundreds of applicants. They are sent to all corners of the world to assist in original research whose purpose is to improve food security and nutrition in the developing world.

And, some students just do things that are outstanding because they see the world through eyes that no one else can replicate. Here is a link to a compelling video made by Bailey Corneal, a young woman attending Durham College in Ontario. She wondered what it would feel like to live on what hundreds of millions of people live on, so she recorded herself over a three-day period eating only one cup of rice and some water. This is must see video. http://www.youtube.com/watch?v=P_oe1PDAFGc

International Student Day may be a job for the United Nations. Government institutions, religious organizations, educational facilities, and industry across the world will pause to consider how education transforms students into productive citizens.

Every country can hitchhike on the idea. International Student Day will connect every student in every classroom across the world; from the most rudimentary hut with one teacher, but no books, to the most elite prep school with computers at every desk and crests on the uniforms.

It will bring into its fold adult education classes in which students, exhausted from a day's labor, refuse to succumb because it is so important that they learn, even at their age. And, it will honor the intellectual tenacity of older citizens who recognize the value of lifelong learning.

This is not an award program. Award programs create competition that helps reinforce the idea that someone's better, smarter, and more deserving of recognition. I'm all for competition as a scoring system to cherry pick leaders, but that's not what this day is for. This is a day to celebrate the process of learning and what happens to the quality of a student's life when ignorance is overcome by knowledge.

By creating a day to honor students who demonstrate the capacity to think we will create an aura that others will emulate. We create pushback against the adulation heaped on student athletes who too often reveal their disdain for the rigors of school by quitting the minute professional sports organizations indicate interest.

My recommendation is October 1st: October 1st gives teachers a month or so to introduce the idea at the start of the fall semester. It gives students a month to appreciate the enormity of the lesson that not only are they capable of learning, but that education is a progressive effort. That every student gains a claim on relevance when he or she learns how to solve problems, make good decisions, and contribute to society.

I nominate as spokesman for International Student Day Tim Duncan of the San Antonio Spurs (Wake Forest, '97) who was aggressively recruited, but resisted the lure of big NBA money until he graduated; and, as an athletic superstar has earned respect for his philanthropic work, including support for breast cancer awareness and for educational programs in his native US Virgin Islands.

Let Mr. Duncan serve as an example to all students that learning is its own reward. And, for those who yearn to improve themselves by overcoming their own ignorance, that knowledge is power.

When we glorify students we make it possible for ignorance, intolerance, suspicion, and xenophobia to die of starvation. That's the kind of hunger I can live with.