Anxiously reading the headlines about Japan's unfolding nuclear crisis in the wake of last week's earthquake and tsunami, I've been looking around for effective ways to help the relief effort.

A benefit auction starting March 24th offers a great way to send much-needed funds to Global Giving's Earthquake and Tsunami Relief Fund, a grassroots organization that is well-equipped to deploy supplies and aid across the country. Handmade for Japan, which was organized just one day after the earthquake on March 12th by Ayumi Horie, Kathryn Pombriant Manzella and Ai Kanazawa, will raise money for Global Giving with an eBay auction featuring the work of artists from the US and Japan. Fittingly, the emphasis is on ceramics. The auction begins Thursday, March 24th, 8pm and runs through Sunday, March 27th, 8 pm. "Handmade for Japan" is bound to be an effective fundraiser, and it will also be a way for people all over the world to honor Japan's incredible contributions to craft and design.

Japan has successfully exported an irresistible brand of aesthetics that we all recognize: anime and manga, Harajuku street style, square watermelons, and the ubiquitous kawaii (cuteness) culture, emblematized by the thousand-yard stare of Hello Kitty and the addictive Youtube channel devoted to Maru the cat. Because the look of so much of Japan's popular culture is dizzyingly bold and graphic, it is easy to forget how subtle Japanese craft and design can be.

With the exception of a tiny Dutch trading post called Dejima, a manmade island in the bay of Nagasaki, Japan was closed to trade with the west until 1855, so Americans were not introduced to Japanese goods on a grand scale until the Philadelphia Centennial Exposition in 1876. The response to the Japanese exhibit at the Centennial Exposition was nothing short of love at first sight: an article in The Atlantic Monthly proclaimed: "the commonest object of pottery of cotton-stuff for daily use has a merit of design and color."* This observation presages much of what people all over the world have come to appreciate about Japanese aesthetics: somehow no detail seems left unconsidered. Tiffany silver "in the Japanese Taste" and the architecture of Frank Lloyd Wright are but two of many examples of the American designs that resulted from this new channel of cultural exchange; not exact copies of Japanese goods, but rather something entirely new, which neither culture would have produced independently.

After World War II, Japanese Potter Shoji Hamada conducted a tour of ceramic schools and workshops across the United States with English potter Bernard Leach. Hamada was deeply influenced by the philosophy of mingei - literally "arts of the people" - a back-to-basics folk pottery revival movement that developed during the late 1920s as Japan was rapidly industrializing. The Leach-Hamada tour, along with the publication of a book called "The Unknown Craftsman", a treatise on mingei ideals by Soetsu Yanagi, introduced a generation of European and American craftsmen, designers and artists to traditional Japanese aesthetics.

Originally codified at the beginning of the Edo period in the early 17th century, the concepts of shibui (simplicity and reserved beauty) and wabi-sabi (acceptance of imperfection and asymmetry) were evident in objects like tea bowls and pouring vessels that were subtly beautiful, perhaps slightly off-center, and had a way of demanding attention, paradoxically, through their powerful understatement. Shibui appeared on American radar in August, 1960 when House Beautiful published an article on it featuring an interview with Soetsu Yanagi. That same year, George Nakashima introduced his iconic "Conoid" chair. An American of Japanese descent, Nakashima immersed himself in the study of Japanese architecture (including a stint with Frank Lloyd Wright) before returning to the United States and embarking on an extraordinary career making studio furniture in Bucks County, PA.

To varying degrees, both European studio potters like Hans Coper and Lucie Rie, European-Americans like Gertrude and Otto Natzler and Marguerite Wildenhain, and the generation of American potters whose education was supported by the GI Bill, including Don Reitz, Val
Cushing and Peter Voulkos, all hew to an aesthetic sensibility that is deeply influenced by Japanese folk pottery. The use of simple wooden tools, high fire glazes that we still refer to by their original Japanese names, the basic forms of unpretentious tableware, and marathon firings in huge outdoor anagama ("dragon") kilns have conspired to create the look and feel of much contemporary studio pottery today. This aesthetic has even trickled down, like Miranda Priestly's proverbial cerulean blue belt, to mass-market ceramics and household goods all over the world. Visit a Crate and Barrel or West Elm shop on any given weekend and everywhere you look, you'll see the factory-made descendants of those influential handmade pots.

Despite the obvious economic advantages of mass-production, handmade pottery is still produced, displayed and collected in both Japan and the United States. American potters will tell you wistfully that Japan really knows how to treat its potters, and they're right: nowhere else on earth can you find the diversity and quantity of ceramic exhibitions that Japan offers - even in posh Tokyo department stores. Entire villages like Shigaraki, home to the Museum of Contemporary Ceramic Art, are devoted to traditional pottery production and supported by both tourist dollars and government funds. A legion of master potters who have the designation "Preservers of Important Intangible Cultural Properties" - better known as Living National Treasures - are symbolic of the degree to which the people and government of Japan value the citizens who interpret and share their cultural values. 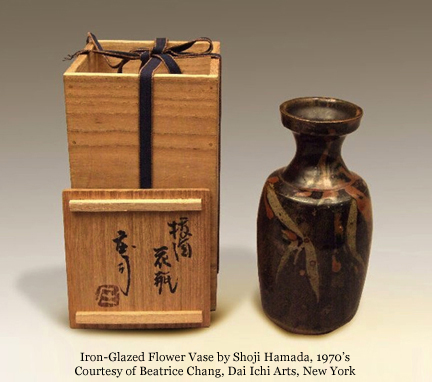 The "Handmade for Japan" auction offers a range of works of contemporary ceramics and two-dimensional works by an international roster of artists including Americans Betty Woodman, Warren Mackenzie, Jeffry Mitchell, Nancy Blum and Jeff Shapiro, Japanese artists Jun Kaneko, Akio Takamori, Hiroe Hanazono and Shoko Teruyama, and Japanese-American artists including auction organizer Ayumi Horie, Junji Miyazawa, Munemitsu Taguchi, and the late, great Toshiko Takaezu, who passed away on March 9th at the age of 88. The auction even has a piece by the National Treasure himself, Shoji Hamada, donated by New York gallerist Beatrice Chang of Dai Ichi Arts.

Bidding on works in "Handmade for Japan" is a fitting way to support the immediate rescue and recovery effort in Japan, and it is also way to give thanks to Japan for the way their aesthetics have helped all of us see the world around us in a different way. It is hard to ignore the parallels: the country that is beloved for its deeply considered, thoughtful craft and design is also a place where people seem to think nothing of putting others before themselves in a desperate situation. In a culture where the smallest detail is deserving of attention, no one is left behind.