Yesterday, in the face of a just-released report by the National Cancer Institute that showed a 9.4% increase in childhood cancer between 1992 and 2007, the FDA let moms and dads all across America down. Instead of making the long overdue move to do something serious about getting rid of toxic food dyes so ubiquitous in our food supply, they instead fell back on those two simple words so often used to stall, delay and deny: "more research."

In kitchens across this country, eight dyes, currently being used by manufacturers, can be found in everything from packaged macaroni and cheese to breakfast cereal to practically every piece of candy your child has ever put in his or her mouth. Links are being found to hyperactivity in kids (ADHD), cancer and serious food allergies.

But here is the truly crazy thing. Kraft, Coca Cola and Wal-Mart have already removed these artificial food colors and dyes from the same products that they distribute in other countries. They did it in response to consumer demand and an extraordinary study called the Southampton Study.

The Southampton Study was unusual in that it tested children on a combination of two ingredients: tartrazine (yellow #5) and sodium benzoate. The study's designers knew that a child very rarely has occasion to ingest just a synthetic color or just a preservative; rather, a child who is gobbling up multicolored candies is probably taking in several colors and at least one preservative.

What's amazing is that in the U.K., the federal food safety agency actually funded the Southampton Study that led to even U.S. corporations eliminating synthetic colors and sodium benzoate from their U.K. products.

And in response, a whole host of companies, including the U.K. branches of Wal-Mart, Kraft, Coca Cola and the Mars candy company (who make M&Ms), have voluntarily removed artificial colors, the preservative sodium benzoate, and even aspartame from their products. Particularly those marketed to kids. Take a close look at the ingredient list for the product below. 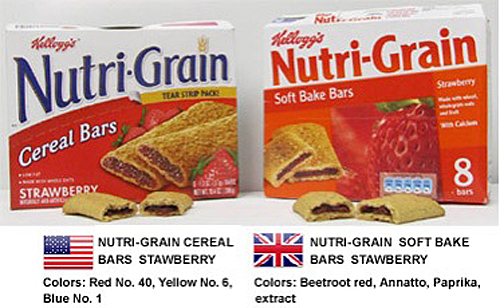 Our American companies had removed these harmful ingredients from their products overseas -- but not here!

Kraft, Coca Cola and Wal-Mart are living proof that it is possible for giant corporations to make and sell kid-friendly, family-friendly, and healthy processed food without necessarily exposing them to a chemical cocktail that might also give them allergic reactions, brain tumors, or leukemia, or the symptoms of ADHD, as the Center for Science in the Public Interest recently highlighted in their report Rainbow of Risks.

No need to go through all the numbers for increased health problems here. You've heard them all and it isn't pretty. For goodness sake, no more research necessary. Lets stop poisoning our own kids. Lets start assuming chemicals are dangerous until proven safe, not the other way around.

Moms, we can create that same change here. And with 51 million moms waking up to the dangers that toxins present to the health of our kids, our numbers are equivalent to the entire population of Spain. Time to get down to business, level the playing field for our kids, and send a message to these companies. Vote with your pocketbook today, this weekend, next month as you grocery shop for your family. Because while the American children only represent 30% of our population, they are 100% of our future. So while the FDA may not value their lives accordingly, we can.

Laurie David is an environmentalist, producer and the author of The Family Dinner: Great Ways to Connect with Your Kids, One Meal at a Time. Robyn O'Brien is the founder of AllergyKidsFoundation.org and the author of The Unhealthy Truth: How Our Food Is Making Us Sick - And What We Can Do About It.

The Other New York Times Workers On Strike