This is the third installment in a four part series. Read the second here. 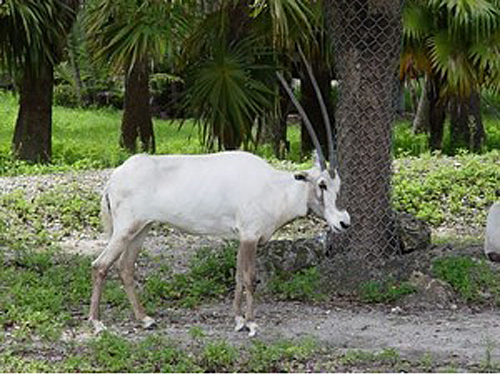 The following day we drive to the southwest corner of the 30-mile-long island. It is midmorning, and the further south we travel, the more inhospitable and colorless the landscape. It is as though Nature has exhausted every tint in her paint box. Then, like a mirage, a scrim of green wavers into view: the Al Areen Game Preserve. A personal project of the Crown Prince, the park is an experiment in conservation, sheltering indigenous Arabian animals threatened with extinction, as well as several North African species. Established in 1975, it is stocked with over 100,000 plants and trees, 10,000 varieties of birds, and more than 500 different animals. Among these are the addax, impala, Persian gazelle, fallow deer, Grant's zebra, springbok, sable antelope, eland, zebra, waterbuck, ostrich, wildebeest, topi, wild sheep, and most significantly, the scimitar-horned Arabian Oryx, extinct in the wild, with only 400 surviving in captivity. The Kuwait Zoo was once the most renowned for its collection of area wildlife, but in the wake of the 1990 Iraqi invasion, and the Allied food embargo, all the edible animals were eaten by soldiers. It is still being restocked.

Al Areen is positively lush, and evokes a sense of what Bahrain was like before overgrazing by camels and goats. It remains a delicate and crushable flower, and environmental collapse, as befell Easter Island and others, is not far-fetched. I train eyes on a poster from the Environmental Protection Committee of Bahrain. It shows a dolphin crying to a man tossing trash into the seas, "Stop -- You are killing me!"

On the way back north to the Oz-like capital we pull over to a dried mud-hut. Hakkim wants to visit his friend, Al Hagry Ajab, a master in the ancient art of falconry. Originally falcons were trained to catch desert game for food. For centuries small gazelle, hare, and bustards were caught, but with the reduced dependence on the desert as a source of food, falconry became a sport. Mr. Ajab's face is creased and leathery, his eyes sharp and dark, like those of a falcon, with a beak even more so. He is happy for our visit, and brings out one of his prize saker falcons on a leather cuff on his left wrist. He has been raising and training falcons for 40 years, and he sells them for about $12,000 to the royal family and other wealthy sportsmen. He says there are over 1000 serious falconers in Bahrain. Buyers travel throughout the Middle East for competitions, often flying first class and insisting the falcons fly with them in the adjacent seat.

Back in Manama we take a tour of the souq, the bazaar. Between Pizza Hut and Hardees and some ultra-modern air-conditioned malls there are relics of a life before petro-dollars, such as the shop belonging to Hassan M. Al-Arrayed, a gap-toothed pearl merchant. His father, blind from birth, was one of Bahrain's premiere pearl merchants, and this father's father used to don tortoise-shell nose clips and tie stones to his feet in order to dive to depths of 80 feet without air tanks, wet suit or goggles, to fetch the "fisheyes of Dilmun." Sumerian legend has it that a king named Gilgamesh, the hero of the world's first epic odyssey, learned that a sort of fountain of youth existed on Dilmun. Once he sailed to Dilmun, he was told to dive for the flower of immortality at the bottom of the sea. Attaching stones to his feet he dove, and brought back the flower -- a fantastic pearl -- to the surface. But while Gilgamesh took a bath a serpent swallowed the pearl, whereupon it shed its skin and emerged new and shining and youthful. The possibility of eternal youth for mankind was lost.

From an old safe behind his desk Al-Arrayed retrieves a ragged, red felt handkerchief and pours out over $100,000 worth of brilliant natural pearls. The oyster beds around Bahrain were justly famous for thousands of years for the unique pearls they produced, pearls with a strange, lustrous sheen, attributed to the rinsing received from fresh water that jets from the ocean bottom. The Kanoo family, one of the richest in the world, rose to prominence as pearl traders over 100 years ago. Now every year the Yusuf Bin Ahmed Kanoo Group supplies some 4000 ships in the Gulf with essential services, such as docking and cargo handling, and runs regional companies that deal in travel, holidays, machinery, oil & gas, exhibition services, courier Services, logistics, specialty chemicals and business centers, and other far reaching retail and commercial activities.

I pick out a single, grape-size pearl the color of hand cream, with a light pink emanating from its center, and ask Al-Arrayed the price. I picked a good one, he says...it sells for $15,000. The pearl industry ground to a near-halt in the 1930s, the result of competition from the newly established Japanese cultured pearl industry, and decline in the yield of the Bahrain pearl banks, fished out after 5,000 years. Where once there were more than 500 traders in the souq al lulu (pearl market), now just a few survive. And their shops are replenished with less than 25 pounds of new pearls each year. Nonetheless, Hassan M. Al-Arrayed does not seem to be suffering too dearly. Despite his tiny, shabby shop, he proudly shares that he has two new Mercedes parked in his driveway at home.

On the way back we stop in Muharraq and meet Yasser Yousif Al-Ansari, the last Arabic coffeepot maker, so he says. He polishes the spout of his latest work, a shiny brass-and-copper model, and holds it in the sunlight flooding the street. His is of a different mood than Al-Arrayed, as he complains he cannot make enough to make ends meet practicing his ancient craft. It takes him ten days to produce one pot, and often six months to sell. So, he announces he is abandoning his craft, and going to work in the shipyard. In the modern one-crop economy of Bahrain, he is lost in another time.

Next we visit Ain Adhari, the Virgin's Pool. Like all the sweet water on Bahrain, the pool is fed from an underground channel that has welled up through fissures in the limestone foundations, discharging water accumulated far away under the landmass of Arabia. Bahrain in Arabic means "two seas," likely referring to the salt water of the Gulf and the sweet waters below the island. Water, of course, is more important than oil on the arid sands of Bahrain, and 5000 years ago the inhabitants worshiped Enki, the god of sweet waters under the earth. Today the reverence is directed towards the desalination plants, which have turned the island into the highest per-capita water consumer in the world--225 gallons a day, compared with an international average of 57.

Legend has it a group of virgin girls were walking in the desert when a horseman galloped over and hijacked the most beautiful. The others begged for help from the heavens, and the ground suddenly split open, whereupon the girls fell in and became colorful fish. Now, there are no fish to be seen in the Virgin's Pool, just dirty water. And as I gaze a man in a lycra biking outfit wheels up on his Trek Madone, strips to his shorts, and jumps in, shattering the chaste reflection of a date palm.

We take a shortcut home, across the industrial island of Sitra, and out the right window I see a U.S. destroyer anchored. Hakkim's fingers constantly twirl a set of amber worry beads.