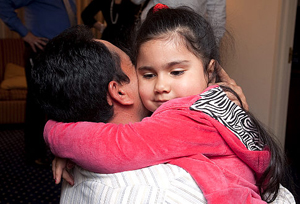 Before 4-year-old Emily Ruiz left Dulles International Airport on March 12, she had been sleeping under a bench with her grandfather's coat keeping her warm.

When she returned less than three weeks later, she arrived first-class and was treated like a princess by 22 officials and agents of Customs and Border Protection.

Little Emily is the U.S. Citizen girl who was mistreated by federal authorities and in effect deported to Guatemala because her parents were illegal immigrants. Fortunately, I and two members of my Long Island law firm -- Bryan Johnson and Hulda Mazariegos -- were able to bring her back on Wednesday, safely and securely. She is now at home with her parents and little brother (also a U.S. Citizen) on Long Island, where she belongs.

For the first few days after this story broke on the Spanish-language Univision and then later in the New York Times, I was bombarded with media requests. But mostly, everyone wanted to speak to Emily"s undocumented parents or later to take photos and video of Emily. It was a great human-interest story, but virtually no one wanted to do any real investigation.

I have spent a great deal of time with Emily's father, Leonel Ruiz, and her grandfather, Luis Dubon. I am convinced that they are telling the truth.

Here's what happened: Emily's parents sent her to Guatemala five months ago because she had been suffering from asthma, and they thought the fresh country air would improve her health. When she returned on March 11 with her grandfather, who had a valid H-2B temporary visa, their flight was diverted to Dulles because of weather problems.

That's when everything happened. A Customs and Border Protection agent determined that the grandfather had illegally entered the country in the mid-1990s. As a result, CBP decided to deport him. Mr. Dubon had a panic attack and was rushed to a nearby hospital and then later returned five hours later to the airport.

So CBP was left with a dilemma. What to do with an unaccompanied 4-year-old U.S. Citizen? First of all, CBP has no jurisdiction over U.S. Citizens. How is it that they got involved with Emily in the first place? Emily's grandfather was carrying with him a letter with the name and phone number of her father. So a CBP agent called Mr. Ruiz at about 3pm in an attempt to get Emily to
her parents. So far, so good.

But then, five hours later, CBP called again, inquiring about the legal status of the parents. The agent asked Mr. Ruiz if he had entered "by plane or the border" and other specific questions to determine whether he was here legally. Mr. Ruiz, who was 17 when he entered the United States in 1996, told the truth. The agent then told him that he could not return Emily to her family because he was an illegal immigrant. The agent gave Mr. Ruiz two choices: to have Emily sent back to Guatemala with her grandfather, or to have her placed in a juvenile facility in Virginia.

Fearing that Emily would be put in foster case or put up for adoption, Mr. Ruiz chose to send Emily back to Guatemala with her grandfather. At no time was Mr. Ruiz offered the opportunity to pick up his daughter.

That's not what CBP says. At least two spokesmen say Mr. Ruiz was given the opportunity to pick up his daughter, but that he "elected" to send her back to Guatemala, insinuating that as an undocumented immigrant, he was afraid that he would be deported also.

Pure rubbish. Mr. Ruiz would have done everything to get his daughter back. Desperate, he went by himself before a reporter and camera at Univision and identified himself, a huge risk for an illegal immigrant to take.

While in Guatemala on Monday and Tuesday, I had the opportunity to speak in Spanish to Emily's grandfather. He had been coming and going to the United States on his H-2b visa for five years without any problems. There was no way he could have anticipated any problems with Immigration authorities.

Mr. Dubon told me that the CBP agent was "arrogant and prejudiced." He said that when he returned from the hospital, he found Emily underneath a bench, cold and hungry, and put his jacket around Emily to keep her warm. Altogether, she was at Dulles for more about 24 hours, until she joined her grandfather on a flight back to Guatemala early the next morning.

Most reporters, especially from English-language media, swallowed the government line unquestioningly. Yes, she was given an opportunity to be reunited with her parents, but perhaps because he did not speak English that well, he misunderstood. A simple communications problem. Or he was afraid to get deported, so he sent Emily back to Guatemala. The reporters were just interested in the human-interest angle, "deported" U.S. Citizen girl reunited with parents. Happy ending. End of story.

But why didn't the media try to resolve these conflicting accounts? I have the ID number of the CBP agent who signed off on the deportation order and a physical description of the agent who mistreated Emily. Why doesn't anyone want to follow up and determine who is telling the truth? Although this story became huge, appearing in media outlets throughout the world, not one reporter ever asked me who the CBP agent was, or how to investigate this further.

As a youth, I vividly recall the Watergate scandal that led to President Nixon's resignation. Enterprising reporters sniff a wrongdoing, and through tireless dedication they uncover the truth. This never happened with Emily. No one challenged the possibly false statement that CBP issued. An illegal immigrant's word against a government spokesman. Who is going to believe the illegal immigrant?

When Emily returned home on March 30, she was treated like royalty by 22 CBP officials and agents in Miami, Atlanta and New York City. One female CBP agent held her hand and called her "the princess of Miami." Another agent in Atlanta said, "It was the least we could do."

Damage control? No doubt. We can't blame everyone at CBP for the actions of one or more rogue agents at Dulles. But why is the Dulles CBP director covering up, blaming Emily's father instead of taking responsibility for an atrocious violation of the fundamental rights of a little 4-year-old girl, who just happens to be a U.S. Citizen

David Sperling is an immigration attorney with offices on Long Island, N.Y. He formerly worked as an editor for the Miami Herald and Newsday.