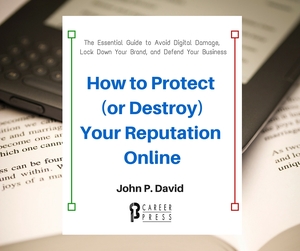 Back in October, I wrote a post about my efforts to write a book, my take on the publishing industry, and my desire to get a book deal. The reaction was fascinating and in some cases, very emotional. First, I learned that there's a tremendous amount of underlying bitterness about the publishing business from unpublished authors. Second, many folks believe self-publishing is the way to go because traditional publishing is broken, and self-published authors can get a better share of the profits. And third, many folks believe it's impossible for an unknown writer to get a deal.

Well, I'm here to tell you that it is possible to get a publishing contract because I did it. Career Press in New Jersey will publish my book, How to Protect (Or Destroy) Your Reputation Online, and it will be available in bookstores, online, and "wherever fine books are sold" by the end of the year or shortly thereafter.

Here's how I did it

First, literary agents are the primary gatekeepers for the publishing industry. So, if you want to get a book deal as a non-fiction author, you first need to find an agent.

How do you get an agent? I didn't know any, so I asked a few author friends to make introductions to theirs (an idea from my friend Bruce Turkel). I also researched and cross-referenced my LinkedIn contacts, looking for agents and any of my contacts who knew agents. I also joined Publishers Marketplace, a website where literary agents congregate and publicize book deals. From there, I started targeting agents who I thought might be interested in my book. I tackled it like a marketing campaign.

Starts with a query

Literary agents get pitched book ideas all day long, and the process almost always starts with a query, the industry term for what I call a pitch. I have been writing pitches to journalists for decades, literally. So I drafted a pitch and started sending it out to agents. Within a few days, the rejections started to flow in. Every agent who responded to me did so in a cordial and professional manner, by the way. Many didn't respond at all, but I wasn't keeping a firm count. About 10 days into the process, I got my first nibble. A very nice agent actually knew about my topic and asked to see my book proposal. Great news, right? Except I didn't have a book proposal, which quickly led to me realizing that "oh crap, I need to write a book proposal."

Thank goodness for Google. I downloaded some sample book proposals and got to work writing an overview, researching competitive titles, and performing an analysis of the potential market. After a full day or so with my head down, I had written what I thought was a decent proposal. I ran it by an editor friend for comments and then zapped it off to the agent. Over the next few days, my outreach efforts started to pay off. About 10 agents expressed an interest in my book and three of them were interested in representing me. Another agent really liked me as an author, but didn't like my book topic (she's a cool lady and we have become friends).

After some interesting conversations, I chose to work with Jeff Herman, a well-regarded non-fiction book agent in Massachusetts. We fine-tuned my book proposal, and Jeff started doing his magic, sending the proposal to his contacts throughout the publishing world. Once again, within a few weeks I started receiving rejections, but this time from the biggest names in publishing. Then, in early December, Jeff reached out with promising news from Career Press. We had a few twists and turns and conducted some negotiations, but the deal was easily completed. The entire process, from my first query to signing the contract, took about three months.

A few things worked in my favor. My topic, online reputation management, is still misunderstood by many businesses, and I'm fortunate to have my own take on it. Also, I think my 25-year career in public relations prepared me well for the process.

My completed manuscript is due to the publisher in a few months, and I will share cover design info and other things as we get closer. I'm also going to be asking for your support for pre-sales, so be prepared for that, my loyal friends, family, and fantastic acquaintances. The process continues to be interesting, and I will share updates as they come in.

My main point is that if you have a good idea for a business book and the capability to write it, you can get a book deal - and I just told you how.