As a seasoned travel writer and royal journalist, I'm often staying at hotels as I travel the world covering royal weddings, royal tours, film festivals and other assignments. However, not all hotels are equal -- there are definitely some more noteworthy than others. Sometimes what makes a place memorable is its illustrious history or exceptional service, occasionally it is an unforgettable experience I had while staying there. 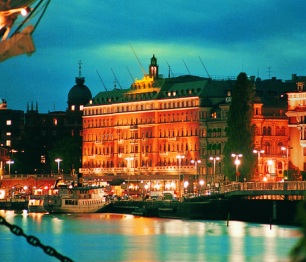 While covering Crown Princess Victoria of Sweden's wedding last June (the royal wedding of the decade until William and Kate's), I was at the Grand Hotel Stockholm. Long one of Sweden's leading luxury hotels, with its interiors designated as a "Swedish National Treasure", everyone who's anyone has stayed here including Nobel Prize laureates, heads of state, and royalty. Not surprisingly, all the royal guests attending Princess Victoria's wedding who were not staying at the Royal Palace directly opposite the harbor, or on their own yachts, stayed at the Grand. There were so many royals mingling at the lobby the night before the wedding it looked like the scene in "Dynasty" when Amanda Carrington married Prince Michael of Moldavia (but thankfully without the cliffhanger finale). 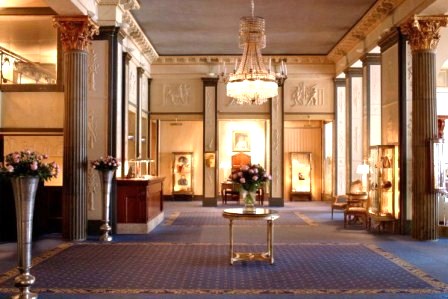 Other than the individually-designed rooms (each like a contemporary jewel box), what I love about the Grand is their Nordic Life Spa which features a slate swimming pool with waterfalls, saunas, and cold water plunge pools. During the royal wedding, many of the royal ladies indulged in the Nordic-inspired spa treatments, and my favorite was a reflexology session with specialist Claudio de Menezes. Instantly de-stressing. 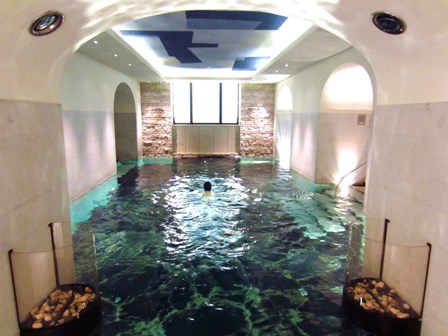 You can't leave Sweden without trying the traditional Swedish smorgasbord - the national gastronomic pride, and I consider the one at the Grand's Verandah restaurant to be the best in town. This four to six-course meal starts with pickled herring dishes and Swedish cheeses followed by a variety of smoked and marinated salmon, cold cuts and salads before hot dishes such as meatballs with mashed potatoes and lingonberries - the ultimate Swedish comfort food. Finish up the meal with scrumptious desserts and a shot of the hotel's homemade Grand Aquavit. So good I would eat here every week if I could. 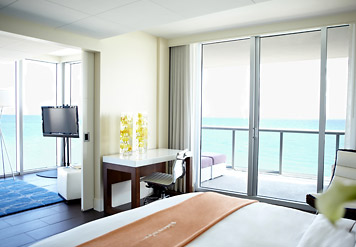 Often times, you remember where you were, or where you were staying when news breaks. Last November, I was in Miami when the engagement of Prince William and Kate Middleton was officially announced. I distinctly remember watching the news unfold on my flat-screen TV framed in front of the floor-to-ceiling windows in my suite at the Eden Roc hotel, as the sun was about to set over Miami Beach. Talk about a memorable, picture-perfect location. Within minutes, one of my editors called to say that NBC wanted to get me on the air immediately to comment on the royal engagement. Rather than hanging out by one of the hotel's three infinity pools, I ended up filing two back-to-back stories on what to expect for the upcoming royal wedding. However, I can't complain - the hotel was gorgeous. 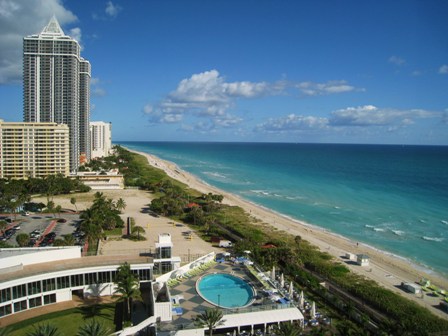 Set on Millionaire's Row on a pristine stretch of Miami Beach, the Eden Roc Renaissance overlooks the Atlantic Ocean on one side and the mansions and yachts of the Intracoastal Waterway on the other. In the 50s and 60s, this legendary landmark hotel was a magnet for Hollywood celebrities such as Elizabeth Taylor, Sammy Davis Jr. and Lauren Bacall. It recently underwent a $200 million transformation which includes bi-level bungalow suites with floating staircases, and a new contemporary Ocean Tower with sweeping views of the Atlantic - even from your bathtub. The lobby bar (pictured below) evokes a sophisticated, old-Hollywood glamor. 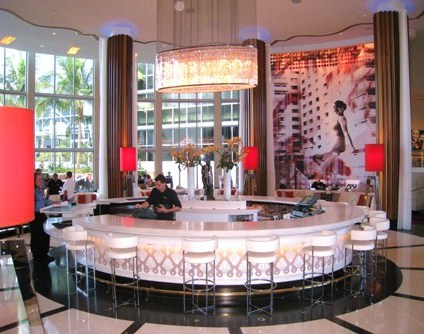 This June, the first ever Elle Spa opened on the property, to huge fanfare. The 22,000 square foot destination spa features "editorially-inspired treatments" such as the exotic Red Flower Detoxifying Hamman Ritual (how good does that sound?), private rooftop cabanas, and for the serious fashionista, there are apparel and beach accessories chosen by Elle editors at the spa boutique. 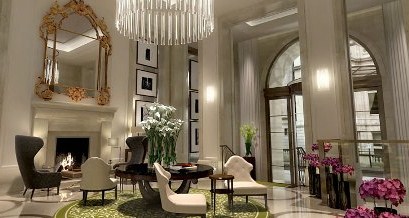 If your trip to London doesn't involve staying at Buckingham Palace, then the Corinthia London might just be the next best place. This contemporary luxury hotel in a restored Victorian building was part of the Crown Estates (property owned by the monarch), and formerly housed the Ministry of Defense. So it's little wonder that it feels palatial with a soaring atrium dome in the lobby set off by a 1,001-piece Baccarat crystal chandelier, white marble interiors, and a maple tree-lined courtyard.

Some old-style luxury hotels can feel stuffy or even aloof -- not the Corinthia. During my stay here while covering William and Kate's royal wedding, everyone from the reception staff, to the concierge, to the charming general manager Matthew Dixon was warm and hospitable. Rather than the customary one paper, I had requested every British newspaper on the day after the wedding, and on the morning of April 30th, the table outside my door (each guestroom has a table rather than the standard newspaper bag that hang from the door knob) had a three-foot stack of all the papers I asked for. That's personalized service I can appreciate.

I also love the guestrooms which are amongst the largest in the London luxury market and feature every amenity such as rain showers, a TV built into the bath, free wifi (as far as I'm concerned, no five-star hotel should be charging you for the internet), and a minibar stocked with Harrods products. What sets the Corinthia apart even further is that they don't have restrictions on check-in and check-out times -- now that's a luxury!

I dined with Tony Potter, the gregarious CEO and Managing Director of the Corinthia Hotels Group at Massimo (pictured above) -- the Mediterranean seafood restaurant at the Corinthia London. Mr. Potter tells me that even before the hotel officially opened in April, it was already drawing London society and international celebrities with glittering events held in partnership with the BAFTA awards, GQ and Vanity Fair.

This June, the hotel unveiled what might be the swankiest spa in London: a four-story, 35,500 square foot flagship ESPA Life spa featuring a silver steel swimming pool, an amphitheater sauna, a black mosaic steam room, a Daniel Galvin hair salon, and a state-of-the-art gym. You'll know where I'm going to be!