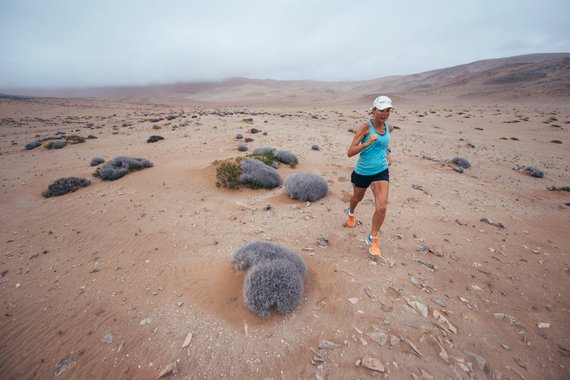 On World Water Day this year, March 22, I will be thinking of the increasing global urgency of water scarcity and of Mina Guli's epic quest to wake people up and convince them that every single person can make a difference.

Then there is Mina: the rare somebody who sees a problem and does something about it. Something really, really big and kind of nuts but all the more incredible for being so crazy.

Over the past seven weeks, Mina has been running the equivalent of 40 marathons in seven deserts across seven continents to raise awareness of water scarcity. She started in Spain's Tabernas Desert, then moved on to Jordan, Antarctica, South Africa, Australia, Chile, and finishes with a run in the Mojave Desert in California, just in time to celebrate her achievement on World Water Day.

Mina's quest is all the more important right now, at a time when so many people feel powerless to change some of the most obvious and increasingly urgent, yet unresolved dangers in the world.

I call these highly probable, high impact threats gray rhinos. Unlike the elephant in the room, which just stands there and is ignored, and Nassim Nicholas Taleb's highly improbable black swan, gray rhinos give clear warning signals and are highly likely and moving toward us. What also makes them different is that we have the choice to do something about them; we don't have to take for granted that we can't solve them.

As she was preparing for the run, I interviewed Mina for my third book, The Gray Rhino: How to Recognize and Act on the Obvious Dangers We Ignore (St Martin's Press, April 2016). One of the "gray rhinos" in the book is water scarcity: a giant, high-impact problem that already affects 40 percent of the world, and is getting much, much worse.

The past few years, global CEOs and thought leaders have ranked water scarcity among the top risks to business. By 2050, the UN estimates, global demand for water will be 40 percent more than supply; hence Mina's choice of 40 for the number of marathons.

Mina grew up in drought-ridden Australia, where her family used as little water as possible taking showers. As a young girl, she saw the level of dams fall precipitously. Her personal experience living with water scarcity led her to a career in environmental law and finance. As she learned how dramatically water scarcity is threatening other parts of the world, one fact blew her mind: that 95 percent of the water we consume goes to the clothes we wear; the goods we use; and the food we eat, especially meat. A hamburger uses as much as 18,000 gallons; a cotton T-shirt, 2,700 gallons.

You may have noticed the way that California's drought has pushed up the price of almonds on grocery shelves. Still, that's an exception to most people's blissful ignorance of the enormity of water scarcity and of the role of the "virtual water" we consume in adding to it. In general, people who live in seemingly water abundant locations have no idea of the impact that what we consume has on places where water is scarce. Mina's goal is to change that, starting by encouraging the world's youth to become responsible water citizens.

In 2012, while living in Beijing, Mina founded Thirst, an organization dedicated to raising awareness. Since then, Thirst has educated and engaged over 100,000 Chinese students, organized a Guinness World Record setting human water dragon, organized water efficiency innovation competitions, and created a community of water ambassadors and change makers who believe that each person can make a difference. In 2013, she started a series of marathons to draw attention to water scarcity, crossing 250 kilometers of the Sahara -all but seven kilometers of it with a broken hip.

She's since moved to Hong Kong and brought the concept global with the help of the Forum of Young Global Leaders, of which I am a fellow member. Another Young Global Leader (YGL), Lewis Pugh, known as the "Sir Edmund Hillary of swimming," swims long distances to raise awareness of the need to protect our oceans. Mina, a long-time runner, decided that if her marathons were to have the same impact, she'd need to ramp them up to a while new level of intensity.

"You need those people who are willing to be nuts enough to identify the problem but determined and persistent enough to do something," she told me in 2015, while still in training for the Seven Deserts Run.

The daily updates from Mina's quest have been alternately exhilarating and harrowing. The videos and pictures of Mina against the grand scale of the deserts she's crossing are awe-inspiring. Her joy at finishing each leg of the journey is infectious. Yet on the down days, when she takes a fall or misses her goal, a group of YGLs has shared her frustration with the physical and emotional challenges of what she's taken on. We gasped at the gaping wound on her knee when she fell in Australia. On the hardest days, we sent extra voice and text messages of encouragement.

There are all sorts of reasons not to do something even when the price of inaction is high. One of the biggest is a sense of powerlessness; that it's pointless to try. Mina's run sends the message that one person can do far more than we think we can. But it also is about the way that little things done by many people can make a difference.

The Seven Deserts Run will conclude with World Water Day, but Mina's work will not. Thirst has launched a water pledge seeking to save one billion liters of water through a series of small changes by millions of people: switching from coffee to tea, giving up chocolate, drinking beer instead of wine, turning off the shower while lathering your hair.

The message is clear: every single person has the power to make a difference, and when we all decide together to change something, it is possible. Sometimes it just takes someone who's not afraid to do something that is crazy enough to get the rest of us to join in. Every desert is made of single grains of sand; every lake, river, and ocean is a collection of drops of water.

Author of THE GRAY RHINO