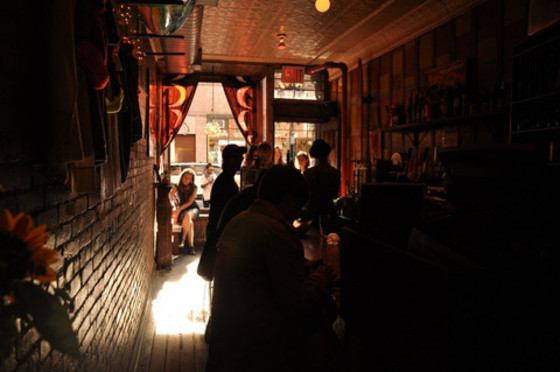 Gentrification breaks the sternum and opens the chest of a city; shining a light on its heartbeat and confirming that it is alive. The seed that revives the city's lifeline is planted by the arts. If we take, for example, Williamsburg - a shoreline neighborhood in Brooklyn - whose rental costs were once the lowest in New York but now rival some of Manhattan's most prestigious neighborhoods, we can glean that the arts have an impact on a neighborhood's rebirth.

As articulated by David Ley, "The artistic aura has the capacity to transform the meaning and value of space - and thereby its inner value also."

That being said, the dominant narrative on gentrification seems to look past, perhaps even overlook, the movement's pure and almost righteous origins. In this millennial age, which can loosely be attributed to overexposure and hyper-sensitivity (lets talk about race at one of America's elite academic institutions), gentrification has been casted by a starkly negative connotation. In its most polemic form, as pinned by Atlantic writer, Saki Knafo, gentrification "is a human rights violation", as it has the capacity to displace.

But dare I ask, is that not an unintended consequence?

Low costs, intimate-shoreline-proximity, and tremendous amounts of warehouse space attracted New York's artisans to flee the hustle-and-bustle of Manhattan and flock to what is now widely referred to as the epicenter of the hipster movement.

Bursting out of the creativity and excitement that comes with artistic culture is a gross distraction, however. The glare of modernity has clouded the pedestrian's gaze. The arrival of the young professional and the emergence of the stained glass window, on top of the existence of the newly paved street (and the bike lane it comes with), are all due to the arts. Gentrification is born out of the worn hand and the brick, not out of the pseudo-opulence that comes with young professionals.

Even if we left the shores of Williamsburg, walked across the Brooklyn Bridge - marveled at its two-character-defining arcs that are separated by an American flag - and stumbled into the East Village, Williamsburg's grungier Manhattan counterpart, we are still besieged by the hapless search to find the roots of the neighborhood's rebirth.

Ever so slightly, light shines. We may stumble onto East 6th Street and 2nd Avenue and catch the light of a playful and creative rendition of Simpson's like anime plastered to the most eastern wall of the Lions Beer Store. Lively purples, blues, and reds stun idle eyes, bringing them nearer and allowing them to enjoy the masterpiece.

Or we may walk north on 2nd Avenue and turn east on 9th Street and encounter Mud Spot.

And in this moment, it is no longer subtle in form or impression.

The arts were here first screams a starburst-esque red and yellow peace emblem. Cemented into the ground, it almost poses as Mud's doormat.

The culinary institution offers transparency on all of the thick-layers of change that occur within a city. Mud engulfs the chasm between the two distant worlds that come with gentrification - the life of the craftsman and that of the squire turned professional. Blending both approaches to life, Mud emerges as a Hipster Diner - catering to all but crafted by the artisan.

What would be a blown out first floor apartment, Mud Spot sits on a one-way street filled with brownstones, boutiques, and wine bars. A seemingly open door and window policy brings Mud's credo onto the street. Said best by its manager, James, Mud is a "cultural center that has taken on gentrification," seeking to find continuity with the arts and any other crowd.

There is a touch of fluidity on East 9th Street between 1st and 2nd Avenue - an openness - centered and reflected by the blend that is Mud.

Upon entrance, a stream of brick caught my gaze. As I moved to the beat of my subconscious, I passed a narrow space between the brick wall to my right, the counter and bar to my left, which are adjacent to Mud's two-man kitchen. There is an admirable calculation to Mud's sophisticated use of space.

As I exited the tight corridor, I entered into what appears as a conventional dining room. Two to four manned tables fill the room with a white noise that is rendered by conversation.

A tenant of the Mud experience.

The blueprint for Mud Spot was laid almost two decades ago in 1999 with the Mud Trucks. Little did New York natives, Greg and Nina Northrop, know that they were starting a trend. The Mud Truck was the first of its kind.

On a stoop just ten feet from the Mud Spot, James brought the trucks to life. They were the "first boutique kind of coffee and food truck" to hit the streets of New York, he said proudly.

Four years of hard work enabled the couple to open up Mud Spot in 2003. Although Mud Spot is larger in size, it continues to share the same focus as the pioneering Mud Trucks. The Mud brand was founded on the desire to create an eatery that has an openness to it, a freedom if you will. What James considers to be a "café vibe."

This defining touch of Mud was never more present than when I followed the space between the tables, stepped down two stone steps, and entered into the courtyard that sits behind Mud. Half wrapped in both brick and wood walls, Mud Spot's sterling attachment is covered by clear ceiling tiles that have splotches of cherry red, adding a warmth to the backroom. A tattered American flag drapes across the far wall, a great complement to the existing rustic tone introduced by the brick and earthy wood walls. A meter to the right of the flag, hangs a three-meter longboard. The flag and the board give the room an artistic and creative flair. The courtyard emanates with light-hearted rock music that is played throughout Mud; "ohs and ahs" in response to Muds delectable almond-crusted French toast; and again, a white noise that is rendered by conversation.

In the far left corner of the room, there is a picture of a man whose ethnicity I cannot place. At first, I considered it to be incongruent. But then I realized, this is what makes Mud, Mud. A place that welcomes all yet is not beholden to one.

Gentrification challenges institutions to be open to change while remaining true to their roots.

Mud has done that.

Be that as it may, the movement is certainly not without its flaws. Displacement has blighted gentrification. Full stop. But if we look at Mud as an example of the beauty that lives within the movement - the air of well-intent and purity that has always given the arts a comforting touch - the suggestion that a city's revitalization merely displaces ignores the complexity of gentrification.

Student, traveler, and a writer of sorts