The picture haunts me.

An image of black and white, it seeps into my consciousness often, particularly when one of the children sidles up to my side for a quick hug.

When I pick up my toddler and cradle her in my arms, I think of the mother - of the hollow, vacant eyes staring numbly ahead as she holds her child so similarly.

When I sit on the floor by my ten-year old, the image appears again. When the children shriek through the house, filling each corner with delighted laughter, I find myself once more drifting to this woman.

Who was she, and what was she thinking as she held her children in her arms and waited to usher them to death? 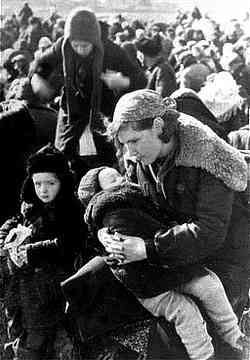 The photo was taken on October 16, 1941 in Lubny, Ukraine as local Jews were rounded up and executed by the Einsatzgruppen, the mobile killing units responsible for "cleansing" the land. I stumbled upon this photo as I researched another atrocity by the Einsatzgruppen, one so staggering that I cannot even fathom the magnitude of the act.

On September 29, 1941, Einsatzgruppen C, stationed in Kiev, Ukraine, began a mass execution of Jews. Having been told they were being transported to Germany, thousands of men, women, and children lined up just outside the city, at Babi Yar, a ravine that would forever after be known as "the killing ditch".

In my years spent researching the people and history of Ukraine, I stumbled across many stomach-turning images, some of them causing such a visceral reaction that I had to spend several days recuperating before I could carry on. But no image has stuck with me quite so profoundly as that of the young mother from Lubny. It is an image that I cannot erase.

I've wondered so often about this mother. I've longed to know how she could be so strong. How did she sit there so stoically, so seemingly calm?

I know it's only a photograph, and it represents a single second in time, but there's something striking about her. She is not panicked. She appears to simply be guiding her children to the fate awaiting them. It's an aching thought, isn't it?

How many mothers walked their children to death in those dark, oppressive years? How many mothers stood at the ridge of Babi Yar and bravely looked into the barrel of the enemy's gun, holding tight their little ones as the shots rang out?

This mother has impacted me immensely. To me, she is the picture of bravery. With her children cradled close by, she offers a depth of love that I could only hope to provide, but pray I never need to display.

We witness the children we birth take their very first breath in this world, and a love so fierce washes over us that we instantly know we'd do anything to keep them from harm. And yet this world is full of danger and mothers throughout history, and even today, have known the pain of being unable to keep the darkness of evil from wrapping its tendrils around their most precious children.

How did this mother do what she did that day? How did she stay calm as she waited for her turn to stand before the executioners?

There's no real way for us to ever know. All I know for sure is her final act of bravery was captured on film so that we could all remember, and may we do just that.

May we boldly remember the woman from Lubny, and the many like her, who taught us that motherhood is synonymous with bravery.