I have been thinking about Jazz-minh Moore's paintings for some time now, and in discussing her current solo show, "All Our Grandmothers," at Claire Oliver Gallery, I must also depend on work from her 2012 solo, "Is That All There Is," at Lyons Wier Gallery.

Moore is painting figures in landscapes, in acrylic paint, on birch panels. She often distresses the boundaries of her panels, or otherwise incorporates the physicality of her substrate into the work itself. Consider, for instance, the nearly St. Sebastian-like wounds suggested by the visible knots of wood in the legs of the figure in Catch:

Moore's embrace of the presence of the birch carries implications for her palette - she tends to paint in desaturated pastels: she can add brightness with her paint, but there is little she can do to add darkness without dethroning the raw wood.

As a painter, she currently tends toward visible, expressive marks in her foreground figures and plants, set off against soft fields of glowing hue: 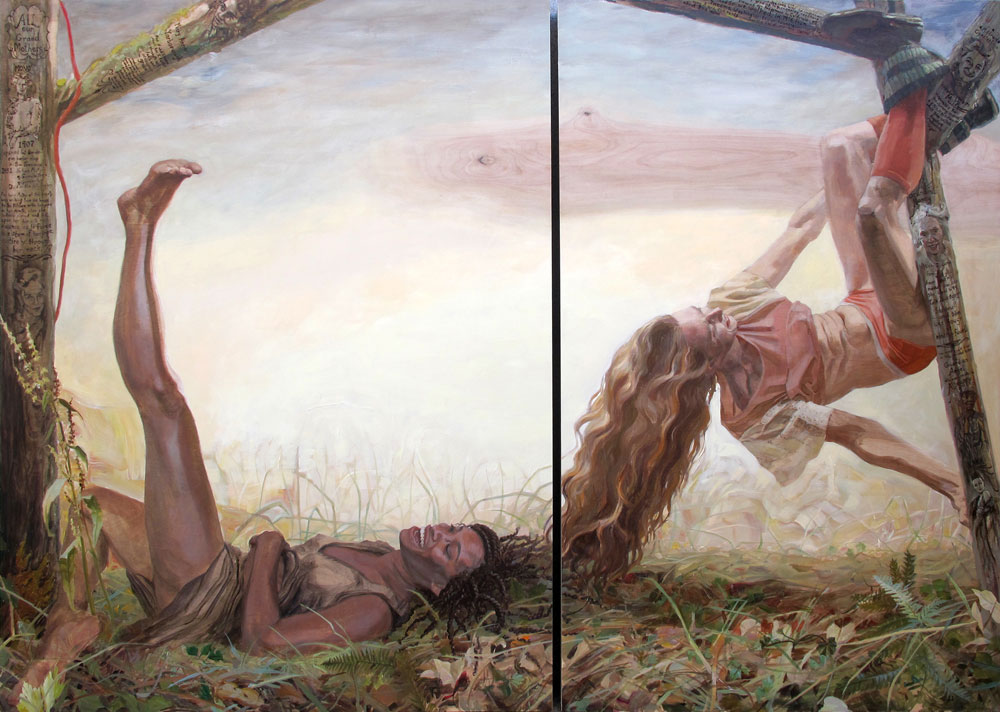 For my part, I have found these paintings very appealing since I first saw them. They have a kind of rough-palmed outdoorsy charisma very much in keeping with the characters who populate Moore's world.

The paintings support a layered experience. For me, the first layer consists in the formal qualities we have been discussing - the light and color, the physicality of the wood.

The second layer is much like smell: an evocation of sense memories of, for me, summer camp in Michigan - tangled plants, burgeoning with life, or perhaps only seen so for being adolescent and hormone-saturated in the seeing - hazy afternoons, sunlight, humid air - shouts and runs and leaps. Reviewing Moore's biography, we find that she chooses to phrase her own youth as follows, "Born on a hippie commune in the old redwood forests of Oregon, and raised in a small house on a dirt road near San Diego, surrounded by fruit trees."

Perhaps what I am bringing to it from my memory is a fair personal equivalent to its sources in Moore's life.

But the visual and quasi-olfactory layers of the work serve deeper layers still. I see Moore's paintings as arising from two fascinating American traditions. Consider the apocalyptic quality of The Tower, from the 2012 "Is That All There Is" show: 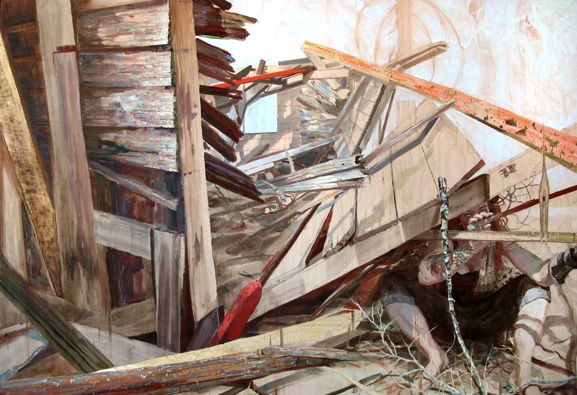 Immediately we see wreckage, tangled wood -- a kind of pastiche of post-Katrina disaster cityscapes. There is nothing classicizing about the imagery on display; the girl, half-hidden in this image, is clearer in another -- a thoroughly modern girl, Moore's little sister, in fact. 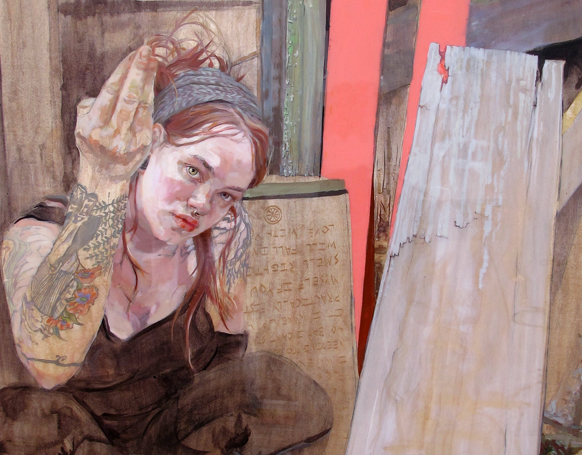 For all that we are looking at modern wrecked lumber, and the pierces, tattoos, hair, and clothes of contemporary youth -- the imagery is phantasmagorical. It is not straight imagery of ruin, but rather partakes of the doctrine of redemptive-ruin. These are not the ruins of the past, or the present, but of the onrushing future. They recall Tyler Durden's reverie in Chuck Palahniuk's Fight Club:

"Imagine," Tyler said, "stalking elk past department store windows ... you'll wear leather clothes that will last you the rest of your life, and you'll climb the wrist-thick kudzu vines that wrap the Sears Tower. ... you'll climb up through the dripping forest canopy and the air will be so clean you'll see tiny figures pounding corn and laying strips of venison to dry in the empty car pool lane of an abandoned superhighway..."

Moore and Palahniuk both present a post-apocalyptic world of savage youth and overgrown plants, a pastoral chaos of greenery and purity. This is the end of the world as foretold by environmentalism, itself already a good part of the way toward becoming a religion. But what kind of religion?

Studying Moore's work, I had a realization about that, about what kind of religious impulse I was observing. It explained to me the vivid feeling of Americanness I had, looking at these paintings, which do not, after all, have any especial visual trappings of America. The religious impulse underlying them, however, is deeply American - it is that giddy millennialism which has characterized us since Jonathan Edwards thundered to a trembling Connecticut town, in 1741, that:

This acceptable year of the Lord, a day of such great favors to some, will doubtless be a day of as remarkable vengeance to others. ... God seems now to be hastily gathering in his elect in all parts of the land; and probably the greater part of adult persons that ever shall be saved, will be brought in now in a little time ... Now undoubtedly it is, as it was in the days of John the Baptist, the axe is in an extraordinary manner laid at the root of the trees, that every tree which brings not forth good fruit, may be hewn down and cast into the fire.

Jonathan Edwards, Sinners in the Hands of an Angry God, 1741

The religious and moral zeal of the American people has, from the start, combined with the stomach-falling anticipation of the crumbling high perch, of Edwards' "he that walks in slippery places," of Leonardo DiCaprio's startlingly gleeful "Here we go!" as he watches the Titanic capsize beneath him. Anglosphere America has, from the start, been a house divided. It has treated its might as a tower of Babel, awesome but definitionally corrupt, alternately attractive and repellent. Through centuries of millennial revival movements, we Americans have yearned for the kingdom of God, the republic of virtue, and been dreadfully tempted by the preceding day of judgment, the orgy of destruction. We have craved it, from colonial New England down to Moore's Greenwich Village of today, this very minute. 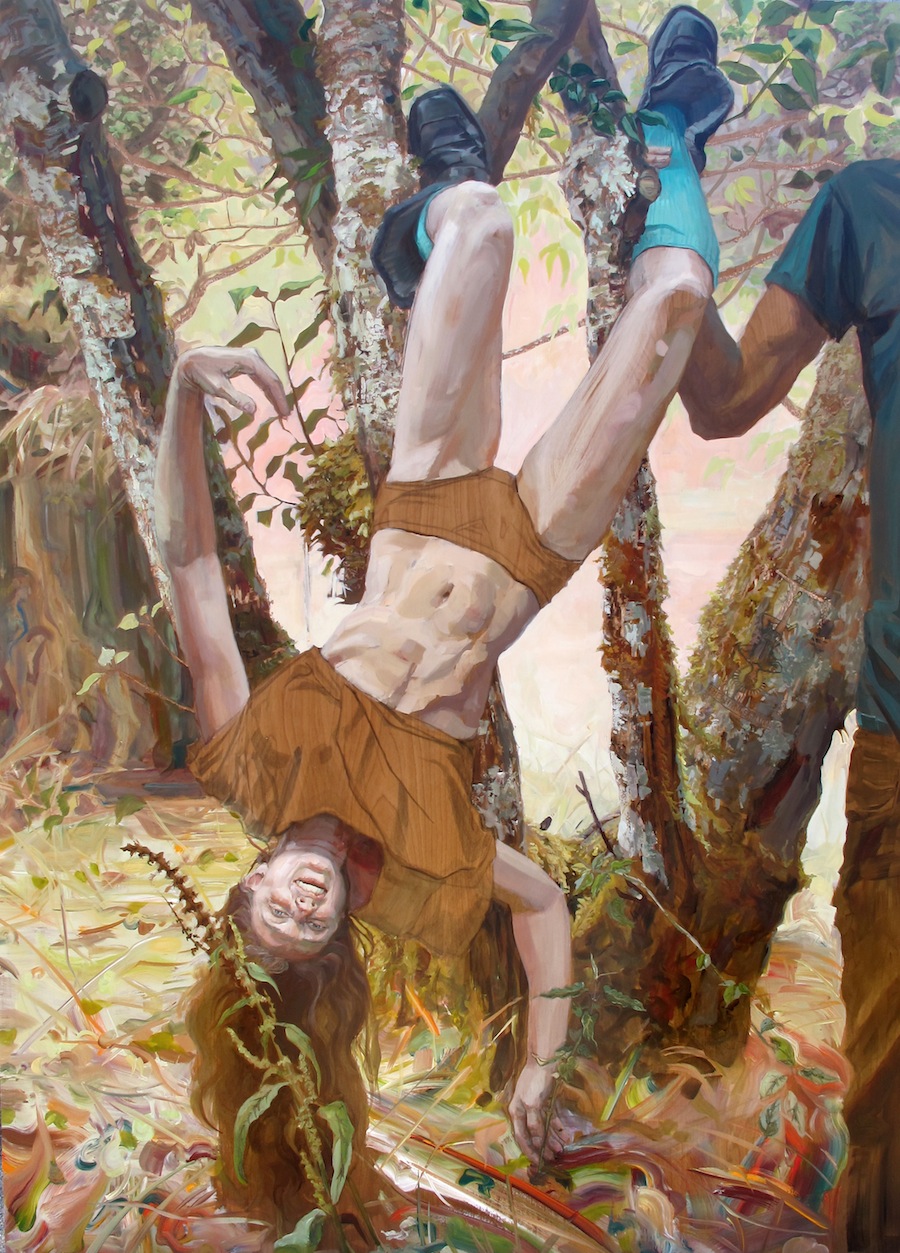 Look at the expression of transport, of terror and pleasure on the face of Moore's self-portrait in The Hanged Man. Combine it with the impressive abs on display. What we see is the deep impulse of a powerful person to be overpowered. That is what I am saying is the American core of the work overall - a fear that our strength undoes us, turns us evil; and thus a distrust of our strength, and an urge to give it up, to have the apocalypse come upon us, to force us from our wicked ways so that we can start new, and start better. 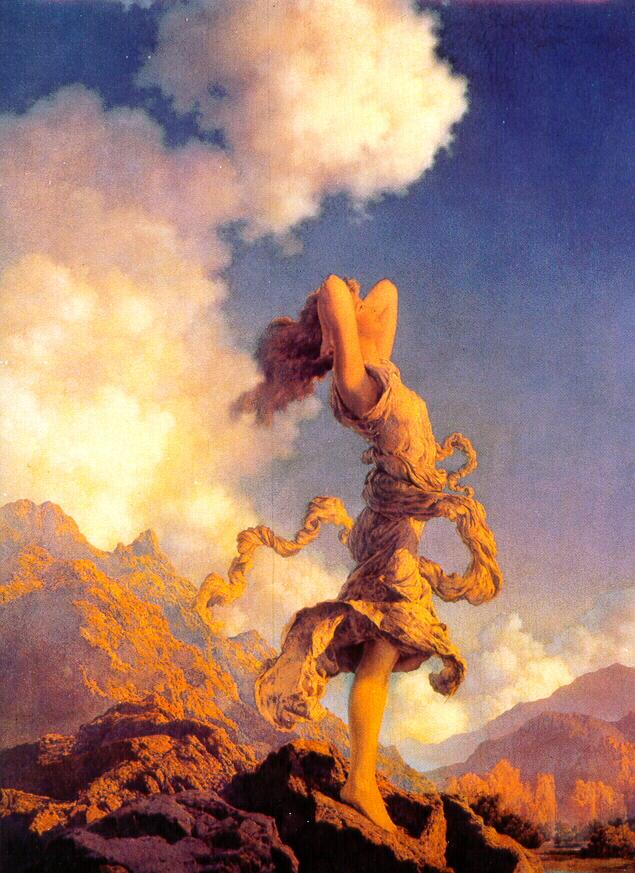 Parrish is of a kind, to my eye, with J.R.R. Tolkien -- he hearkens back, or forward, to a golden age, an age of sturdy, widely spaced, deindustrialized buildings, and of a people in harmony with nature. But Tolkien, a child of the old world, pictures his new men as humble and homely: short, fat, male, and hairy. Parrish, proud son of Philadelphia, helps to innovate an American ideal of beauty which has persisted a hundred years: healthy, long-limbed, strong, and feminine. Parrish (with Manship, Thayer, and a few other artists) answers a question implicit in the millennial history of the United States -- what will the citizens of the republic of virtue look like?

In an idiom drawing on the Greco-Roman fantasies of 19th century France and England, and ultimately gentler than the fascist visions of 20th century Germany and Italy, Parrish says that the citizens of the future will be slender youths, women mainly, fleet of foot, nearly unbounded by gravity, and their defining moods will be gratitude, excitement, and laughter.

Now look again at Jazz-minh Moore's All Our Grandmothers:

She has updated the end of the world, and the golden age, to the present. You think she is singing a pop song, but if you listen for the melody, you'll find that it's the national anthem. Her work is a treasure. It integrates our fleeting moment into our heritage. The confused impressions of the day lack mass and dignity without the perspective of history, nor can plans be built upon them. Moore's body of work lends mass and dignity to the present, and gives it the gifts of plenty - the consolations of memory, the hopes of a future.