New data from the National Center for Health Statistics show that the both the U.S. crude birthrate and the fertility rate fell in 2009, hand in hand with the falling economy, continuing the trend begun in 2008. People don't want to have kids they can't afford -- basically a responsible and predicted decision.

It happens that the crude birth rate, at 13.5*, is the lowest in a century (so basically it's the lowest ever in the US) -- and that's making headlines and summoning images of a babyless, unstable future. But that's not what's happening.

The wire story tells us:

The United States birthrate has fallen to its lowest level in at least a century as many people apparently decided they could not afford more mouths to feed ...The situation is a striking turnabout from 2007, when more babies were born in the United States than in any other year in the nation's history. The recession began that fall, dragging down stocks, jobs and births. 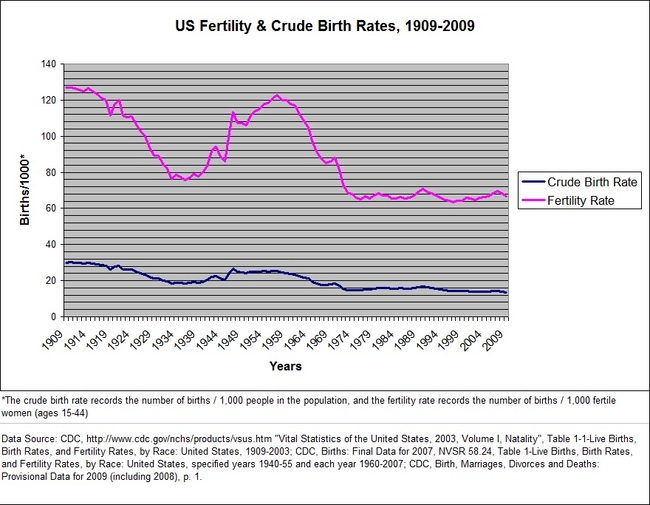 So you're not crazy. Those babies you saw in the park (or took to the park) this weekend were not figments of your imagination. And hospital delivery rooms are not suddenly empty. As you'll recall, the fertility rate in 2007 was way up (to 69.5)† -- higher than it had been since 1990 (70.9), so having it fall a bit now (down to 66.8) just means that we're back where we were four years ago before the economic boom (which turned out to be pretty pseudo) led some folks to have more kids than they might otherwise.

In spite of the recession, in spite of the headlines and in spite of the fact that fewer kids are arriving lately, we are not seeing record low numbers of women having kids. But we are seeing record numbers of older people. As the last boomers move out of the fertility sector, into that 45-64 age band, and as older folks continue to stick around longer and longer, it negatively affects the birth rate because the proportion of infertile people is increasing. Even if the fertility rate stays steady, when the proportion of old folks grows, the proportion of fertile women in the populace necessarily decreases, and so the crude birth rate does too. Like crude oil, the crude birth rate needs some refining to be useful. 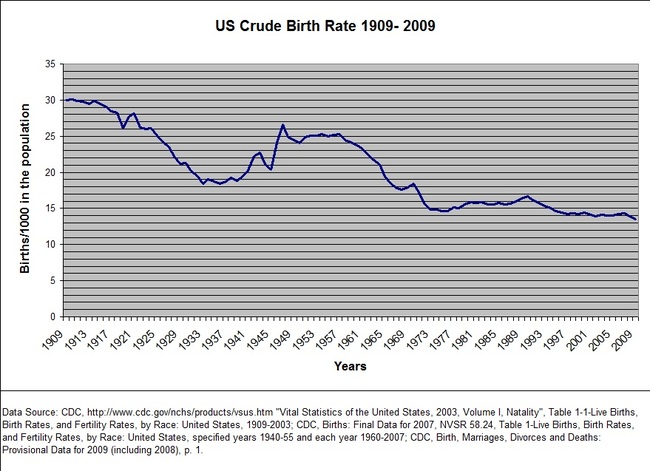 As you can see in the first graph above, the real story of fertility decline happened most recently in the 60s and 70s, and before that between the world wars. The ups and downs of our era are minuscule in comparison. Contra the needs of the news cycle, nothing drastic or frightening is happening on the fertility front this year. It's just plain family planning.

†2007 was also the year we had a record high number of babies--outdoing the baby boom high in 1957, raised because the number of people having babies in 2007 was much bigger, though the fertility rate in 2007 was much lower than in 1957 (69.5 compared to 122.7)--along with stories of rising total fertility rates (numbers of babies a person would have over her lifetime at the current rate) over the year prior.

Elizabeth Gregory is the author of Ready: Why Women Are Embracing the New Later Motherhood (Basic Books, 2008). She blogs at www.domesticproduct.net.