Artist Jillian Mayer sent a message to her unborn grandchildren in the viral work "I Am Your Grandma," singing "You are in the future, you get love by video." She and collaborator Lucas Leyva have dreamed up a sort of sequel with Mega Mega Upload, one of the ten vignettes in the new Borscht Film Festival short, #PostModem, already selected to screen at the next Sundance Film Festival.

This time she sings, "A viral revival. Adults are in denial."

"In I Am Your Grandma, I offer the idea of generational love being transferred from beyond the grave through video." Mayer tells HuffPost Miami. "#PostModem plays with the same concept because the idea of technology as a surrogate for spirituality is the underling theme of the film."

It all started when Mayer was developing video work for an upcoming exhibit and Leyva had the idea to combine them into one narrative short film.

The filmmakers, pegged as two of the "25 New Faces of Independent Film" by Filmmaker Magazine, describe the heady film as a "comedic satirical sci-fi pop-musical based on the theories of Ray Kurzweil and other futurists. It’s the story of two Miami girls and how they deal with the technological singularity, as told through a series of cinematic tweets."

Basically, #PostModem's characters simultaneously try to transcend with and against technology, or more specifically the Net.

For instance, in JetPack, Mayer disrobes and rids herself of all worldly possessions and enters the ocean as if for baptism. She soon launches out of the waves buck naked and attached to a propelled machine. There's a blissful minute or two when Mayer hovers 30 feet above the water.

"This seems like a heavenly moment until I realize that this feeling is incapable of lasting forever and soon it will dissolve. My character was never able to shed the tech world and all attempts were futile. We are all inextricably tied to our technology for everything, including our spiritual lives," says Mayer.

"Technological Singularity is a powerful concept," Mayer continues. "So is hologram Tupac. So is hologram Tupac's company going out of business. We live in a time where we have websites and apps that tend to peoples' Facebook accounts postmortem and predict tweets you would have made if you were alive. That is extreme."

"I don't mind the idea of living forever in social media platforms, I think that is part of my work. I hope people think I am still alive decades after I am dead. Or I am already dead and have been for two years."

Mayer's work is characteristic of the New Aesthetic movement, consistently pulling Internet and computer imagery into the real world. Early in her oeuvre, she was filmed running through Wynwood as screensavers were projected on the depilated warehouses she passed. In her recent "Erasey Page" she offered viewers an impossible service -- to erase anything they wish from the Internet.

"The Net is a built of us. We make it, complain about it, reference it, love it, and we can't progress without it," Mayer says. "We are essentially rebuilding God and later ourselves."

See images from #PostModem in the below slideshow and watch it this Saturday at Borscht 8:

#PostModem: Jillian Mayer And Lucas Leyva Turn The Internet Inside Out For Borscht 8 (VIDEO, PHOTOS) 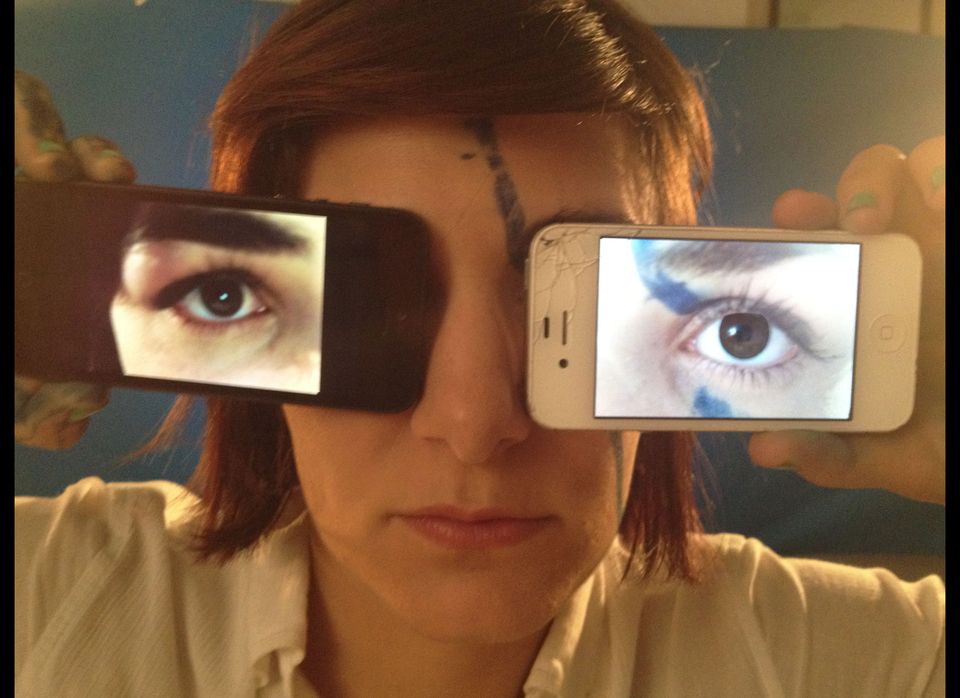