This past summer, I read the novel Everything Is Illuminated by Jonathan Safran Foer. It details the story of one man, whose name happens to be Jonathan Safran Foer--at this point, you can tell we're already in postmodern territory--and his journey back to his family's homeland of Ukraine to uncover his family's past, before his grandfather escaped the country from the Nazis. The other characters include Foer's guide and translator, Alex, who speaks in a hilarious and idiosyncratic style of English, and Alex's grandfather, who is also named Alex. The book has been described by critics as a "postmodern magical-realist novel." But what does this word-salad actually mean? I'd like to examine for a bit where exactly the "magical-realism" part comes from and then where the "postmodernist" part comes from, and talk a bit about how the author uses these genres to the effect he does.

So first things first: the postmodernist aspects of the novel. The most obvious postmodern trope is that Foer has one of his own characters commentate on each chapter of the story. Foer first writes chapters detailing what he's uncovered about his family's past, and then in the chapter following Alex writes a commentary of it. In these chapters, Alex analyzes the writing, criticizes the frequently bizarre nature of the plot, and adds his own emotional response to Foer's writing. The novel constantly takes the reader out of its own story, dissecting it and deconstructing it, leaving no doubts about its artificial nature as a novel. 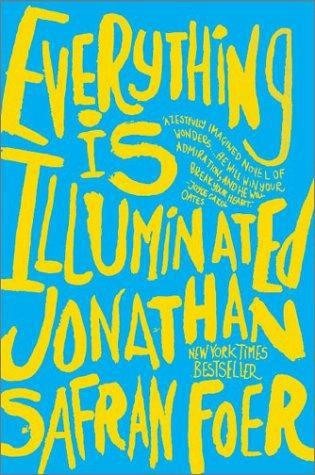 So, the novel is split into three: Alex's account of the group's Ukrainian travels, occurring in the present, Foer's fictional account of his family history, which occurs in the past, and then Alex's letters to Foer, which is written in retrospect. Using this plot structure, novel covers all three of its temporal bases. Another postmodern element we can consider is the fact that Foer's "historical" account of his family is actually entirely fictionalized. The act of merging historical fact and fiction, and then blurring the line between these two is a very typical po-mo trope.

Postmodernism asks what the difference between life and art is, and concludes that there may not be as much of difference as you think. Art is constructed and artificial by its very nature, while life is the complete opposite. But who's to say that what we think of as real, like, for instance, our family history, is 100% objectively true? Our past may actually be just one gigantic narrative, as constructed and artificial as the novels we read. But does that mitigate the emotional impact of hearing or reading about these things?

That's where the "magical-realism" part of the novel comes in. Magical-realism runs rampant throughout the entire novel, and is one of the most vibrant and inventive aspects of it. The novel creates these extremely fantastical and creative situations that are equal parts hilarious, mind-bending, and depressing. The novel starts off with one very magical event: a man is pinned underneath his cart at the bottom of the river and presumably dies. Out of the chaos and debris of his carriage floats a fully born baby, unscathed and crying. The villagers adopt this child as their own. The book explains that the wife of the man whose carriage ran off the roads was pregnant, and in her stress, gave birth to the baby while drowning. This is all played entirely straight-faced, and no one in the novel ever questions its outrageous improbability. It becomes increasingly clear as the novel progresses that Foer only uses these magical-realism tropes in order to make sense of his family's decimation in the Holocaust and to reconcile with his present. If you make your past unbelievable and larger-than-life, then you can laugh at it, learn from it, and eventually move on. What better way to learn from something than to laugh at it? The magical realism curbs the cynicism of the postmodern aspects of the novel nicely. It reminds us that just because something is fake shouldn't cheapen our emotional response to it: a nice little thing to remember in this digitized day and age.

I recommend Everything Is Illuminated highly. It's a perfect book for anyone who wants to read a novel that blends humor and gravity and levity, devastation and creation, reality and magic, and magic and postmodernism seamlessly. The novel broke my heart countless times, and then in the next chapter repaired it only for the purposes of breaking it again. It is explosively written, and you will learn, whether you like it or not, how important it is to keep your family's past alive by any means necessary.