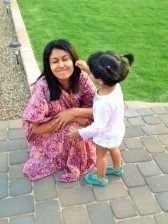 On a bright and unusually crispy August morning in Phoenix Arizona, the garage door to our beautiful home was open for outsiders to catch glimpses of my spouse somberly strapping our baby into the car seat, who appeared to be a little less spirited than her usual ebullient self. But no one could see me, thanks to the shielding walls and drawn shades, shaking in uncontrollable sobs hugging my knees close to my chest as my back soaked up the comforting cool of our master bath tub. This is where something had just happened. Something violent. In front of my one year old.

She was quick with words; much ahead of her months, and I was terrified of her perceptiveness. I was not well -- and I wanted her not to understand this. I wanted her to be blissfully happy for as long as possible. I wanted to comfort myself in believing that her memory is not going to keepsake the instances of her mother's instability. I tried to piece together through my sobs what had just happened. But I couldn't remember what I so badly needed to recount -- the trigger that would justify what I had inflicted on my spouse in front of our child. Something which if the roles were reversed our marriage I knew wouldn't survive.

Pre-pregnancy my husband and I, like most couples, had defined our relationship our way, finding an "equilibrium" of our own as he slept underneath the umbrella and I chose to take long walks alone every time we went to the beach. The pregnancy days were reasonably content too. In anticipation and apprehension, we supported each other -- making ground rules to stick to once we become parents.

As we walked blissfully in the aisles of the baby stores piled up to ceiling with adorable things, we felt warm inside. Even resistant consumers like us -- well-versed in all the tricks corporations play to sell things that would never be needed, filled up carts with fluffy items in soft colors. And the severely emotional last three weeks, the inexplicable anxiety of wanting to have the baby as soon as possible in face of the all the contrary advice and the unpredictable sobs: I thought would be things of past once she came.

She came on March 23, full term and healthy and I was immediately drowned in annihilating attention. From visiting grandparents to loving friends, all wanting make sure we have all the help we need. From ready food to never-ending advice and list of tasks to be completed to prevent long-term harm to the baby. I wanted to feel grateful for all the help we have; scrolling through baby center forums during the sleepless nights which made me privy to other's struggles, trying to feel gratitude instead of wary. I tried hard to concentrate on all that is going right. But I also just wanted to be left alone. I wanted to not have to breast feed, or be home.

I tried hard to follow the pumping schedule, and obsessively kept journals of feeding and diaper changes, failing to recognize anything aberrant in the over-reactions I had to any missteps. The inexplicable sobs and dooming feeling of gloom triggered at minuscule of events went unrecognized by me and all others, or at least no one ever said anything to me. After all this is what is expected of a good mother. Making sure nothing is missed ever. But I failed to realize that I was omitting the biggest need of all for a good mother -- wanting to spend time with my child.

I found every excuse to be away from her. From pumping sessions to workout classes. The single event of my life meant to grant meaning and worth to my being a woman seemed to have stripped me of all my self-worth. I tried hard to justify the person I was being: emotional yet rational, trembling yet firm. I calmed myself down after each episode of intense sobbing using the techniques I had learned from earlier counselling sessions. I was on Zoloft several times; the last time before we decided to try, as even with the assurances of it being safe I couldn't risk it. So as I picked up and stared at the still half-full bottle at 3 a.m. some nights in our dark small pantry wondering whether I should open it, I chastised myself for having such thoughts, for willing to be selfish again and introduce possible poison in my breast milk just to have happier thoughts.

It was a personal flaw and not some illness needing medication that triggered anger every time she cried, I told myself. And yet I was worried about everything for her. I was terrified of SIDS, of shaking her too hard and of dry drowning. I often wouldn't sleep even when she slept, exhausted yet alert -- listening for her breath, watching her heaving chest. I couldn't let her be held by others; I needed to follow them to ensure her safety.

Slowly I started the feeling the prejudice. In my infant child for my spouse and in my spouse for my child. But I chose not to understand why. "I didn't say anything," I would say repeatedly, frustrated and furious. And I would spend long hours in the deserted after-work cafeteria with staring at my screen, my eyes filling up with tears. No one else was around except me. I, the new mom with a breastfeeding infant, was the only one who wanted to stay late.

I walked in the darkness of the night through my own house, exhausted and unable to sleep, recounting the events of the day throughout trying to remember how many times I had lashed out and the words that I had chosen to use. Yet I couldn't get over my anger. The next day was the same, and the day after, and it seemed everyday till eternity would be.

The equilibrium was now in turmoil. Now that communication was vital given the task on hand was of raising a child -- to make peace for our child's sake we tried hard to not communicate -- as communications were culminating in emotional episodes that left undesirable aftertastes.

So how come someone with my education and history, someone who has been to counselling sessions for as long as she could remember and has read up voraciously all material available on anxiety, bipolar disorder and propensity to PPD/PPA didn't understand what is going on? Didn't seek diagnosis and subsequent help? How come someone who read posts on such every night taking advantage of the anonymity that internet allowed in motherhood forums and had leaflets stacking up in her console handed over from Ob-Gyn visits on symptoms and crisis prevention numbers didn't make an appointment to be seen anywhere?

Well first there was the denial. I grew up in a culture where motherhood is revered. The notion of putting yourself anywhere at all, let alone first, once you have had a child was and still is unthinkable where I come from. So I didn't believe I could have PPD. Postpartum depression had to do with selfish mothers who didn't value their children -- I wanted motherhood to be as sacred as it was portrayed to be.

Then there was the fear. I had heard the horror stories of children being taken away. Of parents stuck in legal battles forever while the child suffered in foster homes. So every phone call I received from the social workers who had visited me at the hospital -- making a mark against my name on hearing of my history with anxiety -- convinced me further that they are after me and any misstep on my part, any disclosure of how I felt, will result in the ultimate consequence of us losing her.

In my mind I had come very close to that. After an intense sobbing episode, sitting on the bare carpet in my closet, I disclosed how exhausted I was of breast feeding, how much I felt as a failure for not being able to keep up with the required ounces that kept growing from 16 to 20 to 24 and how desperately I wanted her to eat less and sleep more to the nurse who had called.

Her following question -- direct and unpretentious -- jerked me back to reality. She asked me if I have thought of harming the baby or believed her to be in danger. I denied vehemently, switching to praises of motherhood and assurances trying to make up for the damage I might have caused. The following phone calls lasted less than a minute: everything was now good.

So the August morning was inevitable. The August morning was destiny -- both a blessing and a curse. We had made it through more than a year of our child's life -- smiling for photos while celebrating her birthday every month and liking social media comments on how perfect our family was through sleepless nights, we had managed to make it through her milestones and our mistakes. But as I drove back from my Ob-Gyn's office on the crispy morning with a prescription for Zoloft lying next to me; diagnosed with both PPD and PPA, it felt like the past year meant nothing anymore. The violence that I had inflicted on my spouse is the only thing that I did. It was the only thing that defined me.

Couple of weeks on Zoloft started to work its wonders. I wasn't the person I had been anymore, and his eyes had started to reflect peeks of hope again. Maybe accidentally, but we held hands once or twice and he took care to never bring up the incident -- making me think on wistful days that maybe it hadn't happened at all.

I started to realize what being a parent meant. I was looking forward to pick her up after the day and moments I had spent with her would provoke smiles throughout my day. I wanted to leave work early and spend time rubbing my nose on her belly. Sunday mornings didn't make me upset anymore -- if she was up early we went to the coffee shop together. Her antics; annoying before, were adorable now. I didn't need to be away from her to be with myself. She is me -- even though she looks more like her father.

But the earlier year has left markings behind. I was not her anymore, but it didn't matter. Now that I comprehend how precious each moment is with my child, the exhilaration I feel only makes me long for the moments I have lost. The moments of lost love in a lost year of her first smile, first step, first word and many other firsts. The lost love as first parents for each other and for our child which we will never get back since she is and will be our only one. So as I write this today, sharing quite a painful account, I do so in hope that all mothers reading out there that will choose to seek help overcoming the denial and fear and anything else that might be preventing them. The years and the moments are too precious to take chances on.