More than 1 million people died of starvation and disease during the Irish Potato Famine (also known as the Great Famine), between 1845 and 1852—a watershed event for the Irish that caused 1 million people to emigrate and fueled tension between Irish Catholics and Protestants in England who offered little aid. All the suffering was triggered by the blight that wiped out a single species of potato—the so-called Irish "lumper"—that the Irish depended on as a staple crop to feed their growing population. 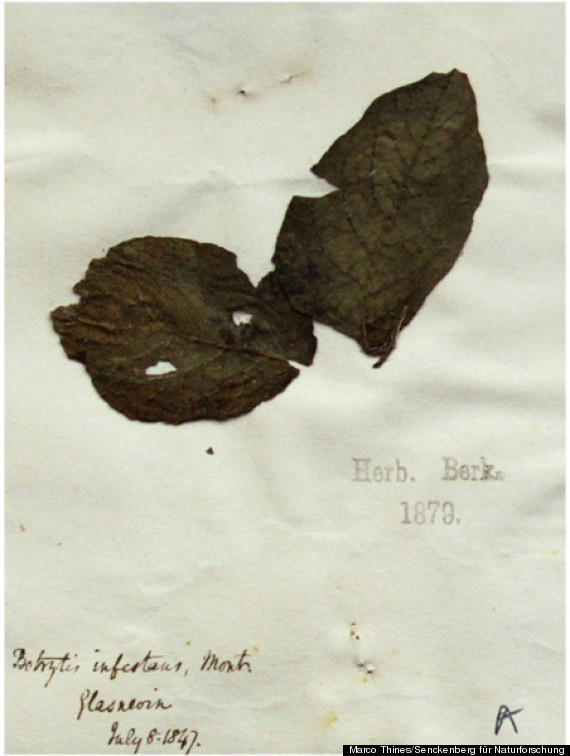 Potato leaves afflicted with the blight were collected in 1847, during the height of the Irish famine.

Now, using DNA from dried lumper potato leaves in herbariums, an international team has sequenced the genome of the organism that ravaged the Irish potato crop and found it was a single strain of the funguslike pathogen Phytophthora infestans -- not the common strain of blight that had long been the prime suspect. It is the first time that scientists have decoded the genome of an ancient plant pathogen and its plant host from dried leaves—and the team found it was a strain that has vanished. "An extinct strain caused the pandemic in Ireland and Europe," says Johannes Krause, a paleogeneticist at the University of Tübingen in Germany who is co-author of the paper published today in the open-access journal eLife. "We found it in all these leaves from Ireland, from England, from France, from Germany. One strain. Then, it just disappeared."

The international team of molecular biologists traced the historical spread of the P. infestans, a funguslike oomycete, which arose in the Americas. The potato was first domesticated in modern-day Peru between 7000 and 10,000 years ago. The crop was introduced to Europe by Spanish explorers in the 16th century, shortly after their conquest of the Inca Empire. It soon became an important food staple that played a major role in the 19th century population boom in Europe. However, Europeans propagated the potato by planting a piece of potato—essentially growing clones of only a few varieties. As a result, when the blight reached Ireland on ships traveling between America and Britain, P. infestans rapidly spread through Ireland, resulting in the devastating famine. Even today, the Irish population of 4.5 million is less than three-quarters of what it was at the start of the famine.

With such potential to wreak havoc, the specific strain of P. infestans that caused the blight has been of great interest. Until now, researchers thought the deadly culprit was a strain—called US-1—that was most common around the world except in South America and Mexico before the 1970s. To test that idea, the molecular biologists traced the evolution of 11 ancient strains of the P. infestans from dried leaves of potatoes and tomatoes collected from Europe, Great Britain, Ireland, and North American between 1845 and 1896 and stored at the herbaria of the Botanical State Collection Munich and the Royal Botanic Gardens, Kew. The researchers extracted fragments of ancient DNA from the leaves and were surprised to find that the pathogen was so well preserved that they could sequence the ancient DNA directly and reconstruct its genome. Then, they compared the ancient DNA of P. infestans with that of 15 modern strains of the pathogen.

They found that the strain that caused the famine, which they named HERB-1, emerged in the early 19th century, probably in the United States or Mexico. It spread around the globe for another 50 years after the famine began but disappeared by the early 20th century, probably because farmers stopped planting lumpers and began to breed resistant genes into potatoes. The US-1 strain, which has been blamed for the fatal blight, is closely related to HERB-1 and arose from the same population. But it diverged in the Americas before the first major outbreak in Europe, says Hernan Burbano of the Max Planck Institute for Developmental Biology in Tübingen, co-leader of the study.

Not only have the researchers solved the mystery of the strain that caused the famine, but they have also shown that dried leaves are an excellent source of DNA from ancient pathogens—and opened a new area of research to understand how pathogens evolve and how humans influence the spread of plant disease. "It's amazing that you can take dried leaves stored for years between two pieces of paper, extract the DNA, put it in a sequencing machine, and get its genome," Krause says.

Other researchers agree. "It's a great sign that herbaria material should really be given a lot of consideration for future work," says evolutionary geneticist Thomas Gilbert of the University of Copenhagen. He is the co-leader of a competing team, which has a paper in review at another journal. In that study, Gilbert and colleagues sequenced the DNA from potato leaves and focused on genes that differ between the ancient famine strain and modern strains of P. infestans. He thinks that further work should be done to test whether there was so little variation in the strains that caused the blight in Ireland and Europe. Nonetheless, he adds, "I think it's a very nice paper. Obviously, I think it's a great idea."