Is the potato salad party already over?

Not quite yet, but the campaign appears to have lost nearly $30,000 overnight. On Wednesday evening, the guy who started the project, Zack Brown, had more than $70,000 with which to make his salad. On Thursday morning, that number had fallen to $43,984. 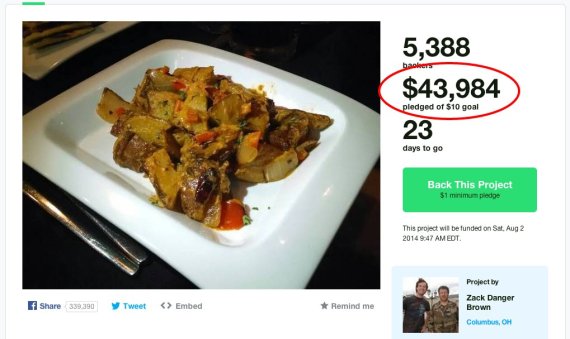 So what happened? It's hard to know -- Brown did not immediately respond to a request for comment and hasn't posted any updates to the project's homepage. One possibility is that people regret donating their hard-earned dollars to the campaign and are canceling their pledges.

Kickstarter's rules discourage, but do not prohibit, people from taking back their donations. Here's the relevant section of Kickstarter's website:

@Hoont @stevekovach remember. the original goal was $10. when the days are up, everyone's payments get processed. you can pull it before

While we are sad to see this thing die down, maybe it's time to move on and buy your mayonnaise-based salads at the deli, the old-fashioned way.