3D printers, virtual reality, drones ... I've watched a lot of nascent industries enter the fray, but watching a new industry growing out of what was once a criminal substance is really interesting to watch.

Today, twenty-three states and the District of Columbia have laws legalizing marijuana in some form. Four states and the District of Columbia have legalized marijuana for recreational use. The cannabis industry (a much more dignified word than pot) is starting to look like the transcontinental railroad at the turn of the century. It's not the rails (or the pot plants) but the entire infrastructure that springs up alongside them.

Many of the new cannabis startups are taking a lesson from the high tech playbook. The pot industry has its own social networks, ratings tools and reputation management solutions. For those used to Indiegogo, Facebook, LinkedIn and Google Maps, the pot culture apps will seem very familiar. But they do grow their own. And with revenues of $6 billion dollars already, in the next few years the nascent cannabis industry should easily find its critical mass of users.

Facebook-like: MassRoots is a social network that bills itself as a sort of Facebook for pot smokers. It's already a publicly traded company and now it's filing for an offering to sell stock with hopes that it will be the first publicly traded cannabis-related stock listed on NASDAQ. Other social media sites like Social High are similarly helping to build the cannabis community.

Indiegogo-like: Med-X, a company that supplies all-natural pest management products to cannabis cultivators, used crowdfunding to launch and continue its research. At CannaFundr you'll find an online investment marketplace for companies in the cannabis industry to match up with investors. 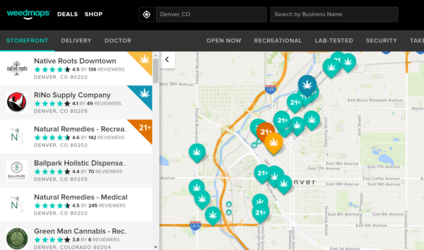 Location-Based: Weedmaps (pictured above), like Google maps, lets you type in a location and see lists of dispensaries, the various products being sold, photos, videos, reviews and pricing. They've even got delivery listings (where legal).

Reputation Management: LeafList builds a trusted network of businesses and friends in the cannabis world using its proprietary algorithms.

Digital Health: PotBotics (pictured below) is a $2M start-up developing EEG brain scan technology to help doctors recommend specific strains for medical marijuana patients. PotBotics will be available by apps upon its launch. 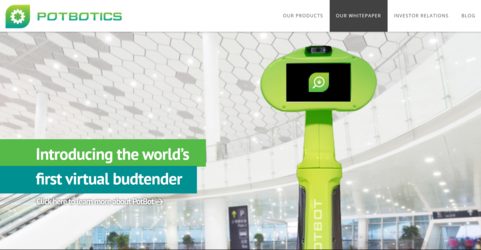 Why do cannabis companies feel the need to create their own infrastructure walled off to talk to their own community, I wondered. Probably to diffuse the negative perceptions of pot culture. When I started researching this topic, I'd hoped to create a link between virtual money and cannabis. My thinking was that the pot industry needed a place to squirrel away their profits and that banks are not warm and fuzzy about working with them. Instead I found an industry whose digital properties are elegant, tasteful, above board and open for business.

When I asked Jeff Zucker from Green Lion Partners, a consulting and business strategy firm for the cannabis industry, about the lack of an alternative banking industry he told me that he advises clients that it's an "unnecessary business risk" in a young industry that's already struggling to get beyond the marijuana taboo. "Banking," he said, "will catch up to the cannabis industry quickly and we need to be careful not to play to the narrative that we're hiding something."

I'm thinking the cannabis dating and car service apps can't be too far behind.