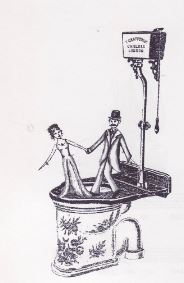 A brief history of the schlong and the bathroom as they relate to Donald Trump and his most recent comments.

Trump recently made linguistic history, first, mocking Hillary for a "disgusting" bathroom trip she made during Saturday night's debate, and describing Barack Obama as having "schlonged" her in the 2008 primaries: "She was favored to win and she got schlonged," he said.

Part deux was about Hillary's sojourn in the bathroom. Remarking on Clinton's late return to the podium after her visit there during a commercial break at this weekend's Democratic debate, Trump said, "I know where she went. It's disgusting. I don't want to talk about it. It's disgusting."

First, as to having been "schlanged," Mr. Trump, alas, knows not of what he speaks. He is clearly unfamiliar with bawdy language, especially those words based in Yiddish.

As a public service, we offer a crash course on the topic.

There are many good ways of describing Trump in Yiddish. The best would be as a "schmuck" or a"putz." Trump, however, had to take things a step further with the schlang. The Donald, after all, does fancy things which are big, and you can't go much larger than the Yiddish schlang (also schlange and schlong) from the German schlange for "snake."

In Portnoy's Complaint (1967), the title character reminisced about his father's: "His schlang brings to mind the firehoses along the corridors at school. Schlang: the word somehow captures exactly the brutishness, the meatiness that I admire so, the sheer mindless, weighty and unselfconscious dangle of that living piece of hose through which he passes water as thick and strong as rope..." Now who does that bring to mind, hmmm?

The Donald, however, made linguistic history in the process, going where none have gone before. We have no recorded usage of the schlang as a verb before his utterances. When asked afterwards, what he meant by schlanged," he said that what he meant was that she "had been beaten badly."

A more definitive reading of the word, however, would be that she got f**ked over by Barrack Obama. That is, after all, the life purpose of the schhlang.

As to his description of Clinton's going to the bathroom as "disgusting," Donald was apparently unaware that it's a somewhat universal function. More importantly, it's also quite the presidential thing to do. President John Quincy Adams laid the foundations of American foreign policy. He also installed the first toilet into the White House, making Quincy (early19thC) a household word.

First names for the toilet have also flourished over the centuries, including Jakes and Johns. H.L. Mencken pointed out how Johnnie was the vogue for college girls back in the twenties, with George and Fred having their moments as well.

Tonight Show host Johnny Carson, however, was not about to take any such s**t. When the manufacturer of portable toilets came out with the new "Here's Johnny" line, Carson responded by suing for 1.1 million dollars in damages, claiming use of the phrase by the toilet company constituted a trademark infringement, unfair competition, and a violation of Carson's rights of publicity and privacy. In a landmark decision, the Court ruled in favor of the manufacturer--leaving Johnny open to a lifetime of public abuse. When reporters sought out his reaction, Carson allegedly responded, "Its never fun being dumped on."

Given the history of the nomenclature of the bathroom, and Trump's description of its use as "disgusting," it seems only appropriate to offer "Donald" up as a new name to replace the John thus lending it the requisite dignity.

Let's take things even a step further, extending it to the process itself. A favorite activity of Kinky Friedman, Western singer and mystery writer extraordinaire, was to "take a Nixon." This opens the door to myriad possibilities such as having to " Dump your Enron stock" Or "Evacuate a Taliban."

Better yet, next time you have such a need, just "Play your trump card. "Consider it your patriotic doody to do so.

Skeptics should simply relieve themselves of their doubts. Void where prohibited by law.