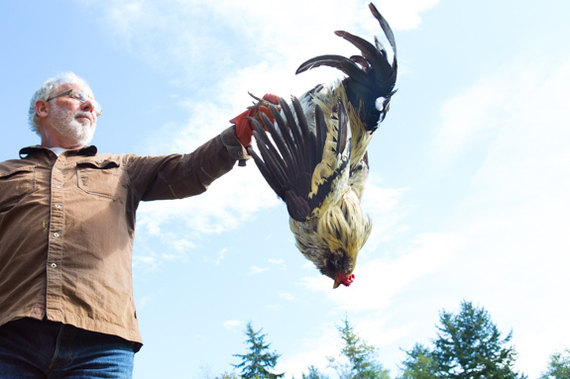 Remember sleepy Lummi Island, Washington from our previous story on Chef Blaine Wetzel & The Willows Inn. That wasn't the only treat to be had on this small bit of the Pacific Northwest. Lummi Island is also home to farmer, fisher and forager Riley Starks of Nettles Farm. Nestled in a wooded clearing, Nettles Farm is both the precursor and the antecedent to the famed Willows. 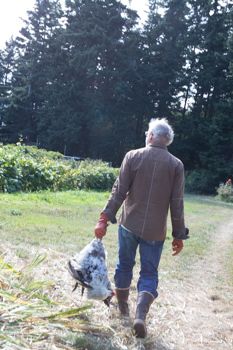 Riley moved to Lummi in 1992, establishing his farm and poultry business 11 years before purchasing the dormant Willows, which was already 100 years old. It was Riley's lifelong history of procuring ingredients, coupled with a natural ability to find the best that informed the development of Nettles Farm and The Willows Inn. His reputation is built on sensitivity to his surroundings, raising uncommon poultry breeds and procuring spot prawns, salmon, halibut, sea cucumber and other local delicacies.

This focus came naturally from his upbringing in a military family. Moving to France when he was 10, his father felt strongly in "living on the economy"...military parlance for not living on base.

"For four years in France, I walked everywhere and ate something every 5 kilometers," Riley remembers, channeling the tasty memories of his childhood. "This informed me about food and how I feel about eating in your own landscape. The agro-tourism model found throughout Europe has been my goal at the farm since 1992." 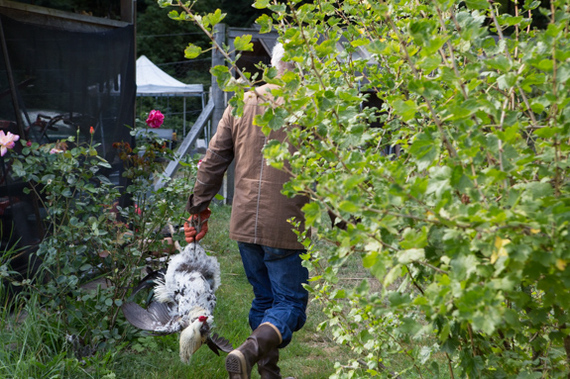 That model is alive and well at Nettles Farm, now also home to an intimate B&B where we're spending the night.

"You have several choices for a true agro tourism experience and they start right outside your door," is Riley's take.

Riley started pasturing chickens at Nettles Farm to make it profitable. Selling tomatoes and eggs was not enough, but by raising, slaughtering and selling specialty chickens such as the Red Broiler, the farm prospered. His reputation grew built on sensitivity...in this case for life and death with careful attention to humane slaughter practices. 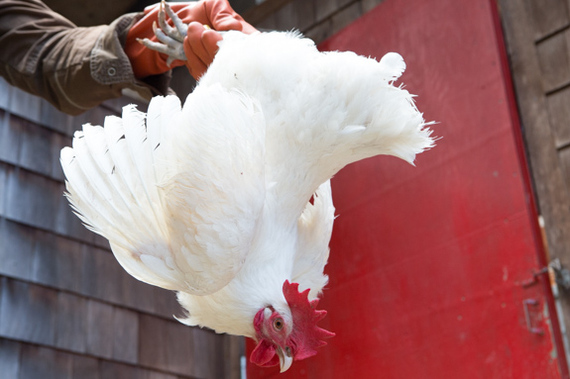 The farm now maintains the smallest license possible for slaughter, providing 1,000 birds a year for individual consumption and for fine restaurant customers. He also conducts hands-on slaughter workshops...agro-tourism of the slightly messy though meaningful kind, designed to create an appreciation of the source of our food as well as a respect for the life force of the birds. 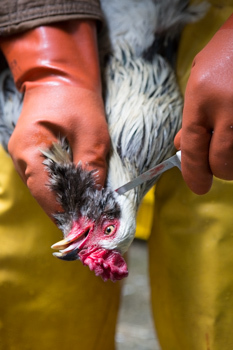 In the waning afternoon, Riley walks us past the chickens in their outdoor pasture, to the outdoor slaughter stand at the farm's far corner. He has selected three roosters, somewhat past their prime, to demonstrate his slaughtering techniques.

Die-hard urbanites, we're reluctant to get our hands dirty in this learning process, hiding behind our cameras and note pads. Oddly, the act doesn't seem as violent in this bucolic setting. The process is reinforced by Riley's obvious respect for the birds and the careful steps he takes.

Holding the birds upside down to calm them, they are dispatched with a quick, painless slit to the jugular and put upside down in metal cones to quickly drain before their blood coagulates and tarnishes the meat. 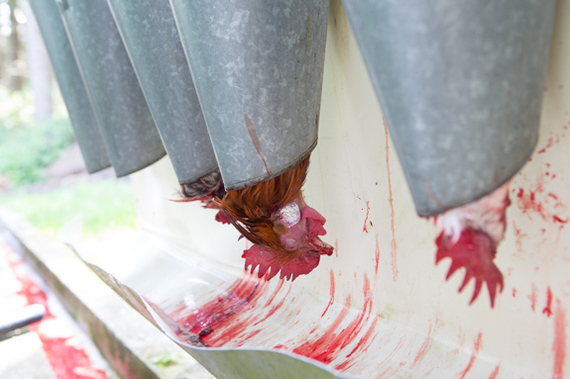 One at a time, each bird is placed in a scalding bath of 150 degree water for just 60 seconds for easier plucking. After the wet feathers are removed, the thick outer layer of skin on the legs, feet and claws is discarded and these parts are saved to use for collagen giving flavor and thickening to broth. Then the birds are hung from special rigging to carefully remove the innards. This is a delicate process and Riley is careful not to bust the gonads or other organs which could spoil the raw meat. The innards are saved as well, for use in specialty dishes. 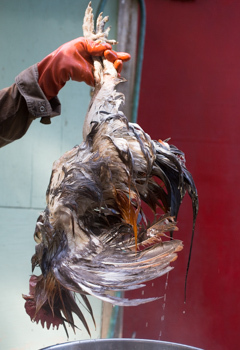 "Originally, I set up a USDA approved plant, slaughtering under a USDA Grant of Inspection, but only 150 birds, two days a week. Industrial plants process 150 birds a minute with less than humane practices."

"This country's stuck on industrial, hybridized chicken created by fast growth and efficient processing...six weeks to come to age for the Cornish Cross breed when six months is normal. They're bred with fewer feathers, minimal internal structure and no connective tissue to make processing easier. The breast meat is gigantic for their size...so large, they can't even walk."

Apparently, there is a particular smell that identifies a great tasting bird at slaughter. The third bird is the prize and Riley beckons us to take a good whiff...a bit gamier to our nose but then our nose is not that discerning at the smell of a fresh kill. 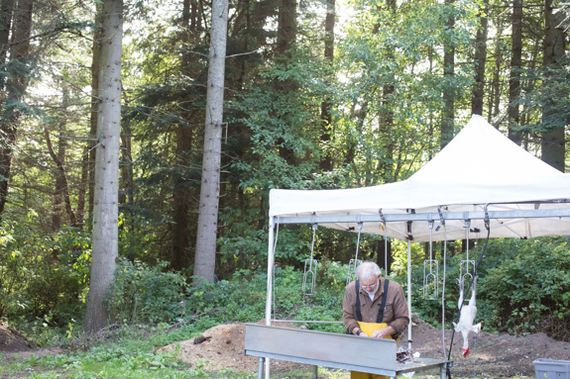 "I am constantly searching for the perfect bird," Riley explains, "...and I bring Seattle chefs here to the farm to do taste tests."

Riley's goal is to carry only a small line of flavorful birds that he can actively curate. His formula for chickens is pasture raised, organically fed and ultimately, air chilled after slaughter. 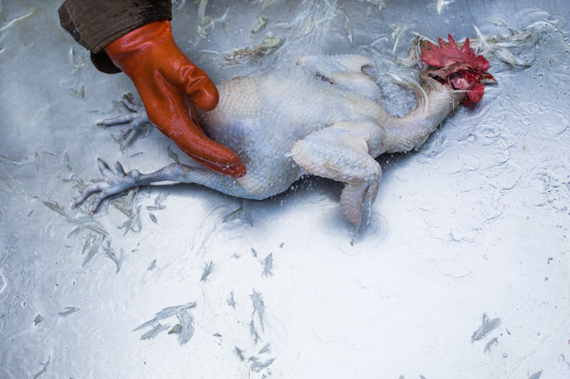 "The country is missing the point with Cornish cross. There are hundreds of varieties. I've tried four or five breeds and Canadian Blue Foot is the one. They have expensive genetics and the right stink, with exceptional flavor and texture. I want a little bite to the taste. When you know it's a good cross, you can taste it in the meat." 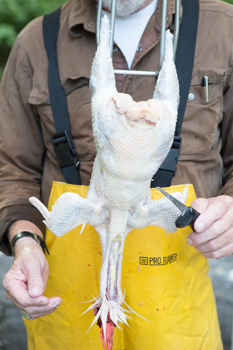 "I have 250 chickens on the property now and still have great chef customers like Tom Douglas and Jerry Traunfeld,"...both Seattle chefs we knew from previous stories. "A proportion of their diet is pasture and I take twice as long to let them mature...one year vs. six months."

It was already obvious that ingredients are Riley's true passion, even before he finished the story of his involvement with The Willows Inn. As the restaurant developed, he hired Blaine Wetzel from the world-renowned Noma restaurant of Copenhagen. With Blaine in the kitchen, combined with guest chefs such as Greg Higgins, Greg Atkinson and John Sundstrom, people were coming to the middle of nowhere for the amazing fare. With articles in the NY Times and Boston Globe and food events in New York and Paris, the tiny Lummi Island establishment was making a mark....but also becoming a victim of its own success as logistics, renovations and payroll grew.

"In my heart, I'm more about butchering chickens and filleting fish," Riley explains. People had different expectations. I'm used to people who could overlook flaws. People were not going along with less than perfect. It became too much for me."

Ultimately selling the restaurant to Chef Blaine and a group of investors, freed Riley to focus on the development of Nettles Farm and other locavore passions, though The Willows is still a prized client. A couple of those other passions include truffle foraging and the ancient Salish tribe skill of reef net fishing to harvest the surrounding waters.

That experience would have to wait till later in the day....and is our next story.

To view more photography from this story, click here. 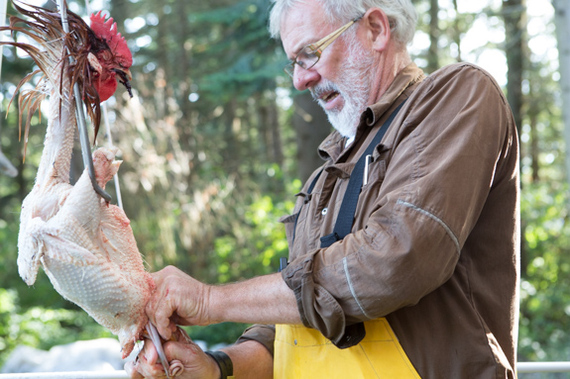