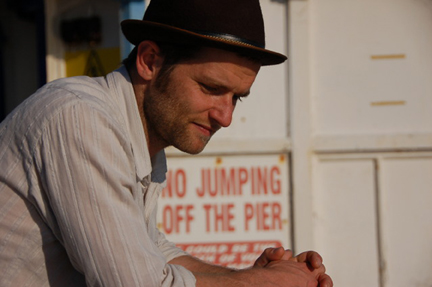 British singer-songwriter David Ford's first video from his new album Charge, "Pour Some Poison," premieres here, the clip directed by Mark Woodward and the artist. Charge was produced by James Brown of Foo Fighhters and David Grohl fame on his kitchen table in exchange for some pizzas, and its physical release will include four live acoustic bonus tracks recorded at Ford's Piano Bar back in March. The project is influenced by David Ford's love for Memphis soul, New Orleans jazz and New Jersey rock 'n' roll and travels across the US, his North American tour starting in Chicago May 29th. FYI, for the further adventures of David Ford, check out his book I Choose This - How to Nearly Make it in the Music Industry that documents 10 years as a singer, musician and performer. 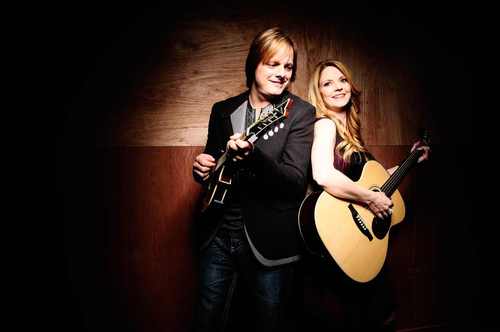 Debuting here is a "Track-by-Track" of Gypsy Runaway Train, the brand new CD from award-winning brother/sister duo The Roys, during which Lee and Elaine go behind the scenes and chat on each song with wild abandon. Ok, not so wild on the abandon, but their insight definitely is entertaining and worth a peek.

The album will be in stores on June 4, and it's their third release for good ol' Rural Rhythm Records. It contains six Roys originals and some of their all-time favorite Bluegrass and Country classics, so get the jug and be ready to be rur-i-fied by hot vocals, steamin' pickin', unbridled enthusiasm and passion that make this 13-track wonder a celebration of the roots genre. 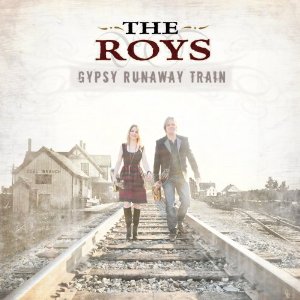 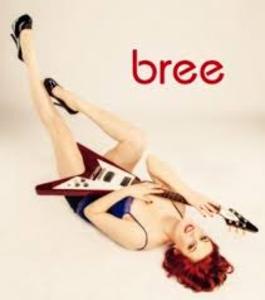 A Conversation with bree

Mike Ragogna: Why hello, bree. How are you?

bree: I'm doing great. How are you?

MR: I'm doing well and I'm very happy to be talking to you. Tell us a little something about yourself.

b: Well, I'm a Nashville-based rocker, very, very thankful to be here in Music City. I'm originally from Oregon, and I've got my own special slice of rock 'n' roll to share with everyone. I'm very excited.

MR: What got you to Nashville?

b: Well, it's the music. I heard that there was this new scene going on here and that it was a great place to be, but what really intrigued me was that at the time, I was living in Palm Springs, California, and there wasn't a lot going on there, as much as I love it. So we moved over here -- me and my manager and drummer -- and I just started writing every single day. This place really fed me and inspired me.

MR: Yeah, it's the type of place that really does inspire one to write virtually all the time.

b: Oh my goodness, yes. It's also very competitive, which I thrive in.

MR: So, what's it been like to be part of the music scene down there?

b: It's been interesting. At first when you're kind of checking everything out, you see mostly country, but a beautiful part about Nashville is that there is literally every genre. They have this incredible rock 'n' roll scene that is underground, but it's pushing its way up. It's baffling, almost, to see how many different genres there are in a supposedly "country" town, and how people embrace each other and the diversity of this place.

MR: Did you have any mentors when you got to Nashville? Did anybody show you the ropes a little?

b: Not really. I kind of just jumped right in. You do things, you talk to people and you kind of scope things out. I figured it out.

MR: What about touring? You've been getting out of Nashville and playing other places, right?

b: The last show we did was in Lexington, Kentucky, and that was my first show outside of Nashville. It was a lot of fun. I really loved it.

MR: What about that Flying V that you play? How did you get attached to that kind of guitar?

b: Well, I've always been drawn to it, ever since I was a kid. I remember walking into a store and just nothing else really called to me. The V has a sexual look to it for me, and it's light. It's just so sexy.

MR: Do you ever let another guitar into your life?

MR: Tell me how you got into music? What got you into writing and wanting to be an artist?

b: Well, I've always been musical, ever since I was little. When I was a little kid, I'd stand on top of my little toy chest with a pretend microphone and make up songs on the spot and sing really loud. I grew up singing gospel in my father's church. I was always in choir, and from a young age, I heard good rock 'n' roll and was surrounded by it. So it has been the love of my life. Seriously, it's led me and gotten me through the worst times in my life.

MR: Now you get to town, you don't have a mentor, but somebody must have "discovered" you because you've got a self-titled album coming out. How did that all come about?

b: When we first moved here, we hadn't had our bassist yet, so I was just writing and writing, creating my own style. Then we ran into our bassist after I had written this song called "Forbidden Fruit." I kept hearing this stand-up bass, and my drummer David (Castello) was hearing it too. The very next week, we go out and in walks Mark McNeely with his stand up bass. We knew within the first thirty seconds of playing the song with him that we had something special. We were very fortunate to work with Justin Cortelyou in the studio, Bob Ezrin's right hand man; he was gracious enough to let Justin record my music. He loved my rock. It's fresh and it's real and it's surprising because they look at me and go, "What's she going to do? Is she going to play some country?' No.

MR: I've got to say, I was listening to one of your songs, "I'm The Boss," and now the lyrics make even more sense after having spoken with you.

MR: Can you go into how these songs were written? What did some of these topics mean to you?

b: Every song I've written is all something I've felt or experienced, or it's a conglomerate of different events. I had an ex-boyfriend who really was only interested in me whenever he drank whiskey, and that wasn't easy for the self-esteem. I carried that around for years and then I was like, "I'm going to write about this." Songs like "I'm The Boss," that's me putting my foot down, and just stating my presence. I love that it's the first song on the CD, it's like, "Here I am." I'm here to shake things up. And I'm a very sexual being, so it's like I love everybody. I love girls, I love boys, I love everyone, and I'm very open about that in my album.

MR: There have been groups and artists in Nashville who have been bucking the traditional sound happily for quite some time. I'm guessing that you weren't worried about conforming to expectations.

b: Absolutely not. I believe that my music is timeless, it's very accessible and it rocks. People always want to have fun, they always want to dance, they want to hear a good melody and they want to hear something different, and I cover all that territory. I took it on as a challenge and I love that. I love to be stimulated in that way -- it lights a fire under my ass and it makes me want to wake people up.

MR: Let me ask you about today's music scene and your own personal style. You're doing your own -- straight on rock thing, versus dance/ dubstep -- that's the foundation of virtually every pop record right now. You're not only not doing Nashville, but you're not doing what is typical pop right now.

b: Oh, no, it's not typical at all. It's my own little thing. The thing with the scene now, when I say I want to wake people up, it's because it's getting a little stale. I need to get people off their asses. Right now, everything is so safe. No one is really pushing the envelope, so it's my job to come in here and say, "Hey, this is real. We don't use tracks. This is all three of us in the studio." We may add the occasional harmony or guitar part, but it's honest, it's raw and it's real, and to me, that's what rock 'n' roll is. I want to share that. I want to shake things up a bit.

MR: It seems like you're bringing back a spirit of rock that's been hibernating.

b: It kind of has. I just feel like it's my job. It's what I want to do. I'm going to bring that out. This is real. I'm on stage and if I mess up live, then I mess up live. To me, that's art. The best art is never perfect. I just put my heart into it, and I believe that when you're so passionate about something and you want something so badly, what can get in your way?

MR: That's really well said. Coming off that, what advice do you have for new artists?

MR: Of all the songs on this album, if one wanted to discover who bree is in the most concise way, which song would it be?

b: That is such a difficult question. That's almost like asking me to choose a favorite child.

MR: Right on, that's fair. But for instance, I would say it's "I'm The Boss," but do you have a different opinion?

b: Every single song is a piece of my personality. You listen to the album and at the end you're like, "Wow, I feel like I know this girl." You go from "I'm The Boss" to the song I wrote about my mother who passed away, "I Hope You're Smiling." It is a very tender song for me. So you get the soft side of bree, and you get the very independent, rocker bombshell, girl power, and the sexuality and the fun. There are so many sides to me, and I don't think I could choose one song.

MR: Are you going to be on tour supporting the album?

b: I'm really hoping to tour this year in the fall and late summer. I just can't wait to get on the road. I just want to play every night. I really would love that. I'm really excited for my CD release on June 18th. I have a CD release party here in Nashville at Mercy Lounge. I'm really excited. This is something I've wanted since I was a child, and having the CD in my hand was like, "Yes!"

MR: It really is a cool thing, I know.

b: All that work, and here it is. It's my upbringing. I had a very sad life, and I wish I could forget ages six through 21. But it's helped me write, to grow as a person, and I don't think my CD would be the way it is if I hadn't gone through everything I have. I'm ready to wake everybody up and get them off their asses.

MR: You're really charming and a very energizing person and I wish you all the best.

b: Thank you so much.