Imagine a single, unemployed mother of two children -- an infant and a 4-year-old preschooler. She's unskilled and her work options, at least at the outset, involve jobs paying at or near the federal minimum wage: $7.25 an hour.

In an ideal world, a suite of state and government tax credits and direct benefits would support this woman as she moved into the labor force and, with time, climbed the income ladder until she was earning enough to forego the assistance and support her family on her own. But this is not, many poverty researchers argue, an ideal world.

A novel tool developed by the Urban Institute, a nonpartisan social policy think tank in Washington, measures the complex interactions between federal and state income taxes, payroll taxes, and a raft of potential benefit programs. The tool sheds new light on what can often be a brutal reality for those at the lowest rungs of the economic ladder: As even meager income is earned, benefits can fall off precipitously, often making it difficult, if not impossible, for many people to climb out of the poverty trap.

"It's been well documented that there comes a point when it can seem like it's not worth working any more," said Elaine Maag, a co-director of the Net Income Change Calculator project, and a senior research associate at the Tax Policy Center, a joint venture of the Urban Institute and the Brookings Institution. "Tax and transfer benefits can phase out fast enough that people are not seeing that much of an increase in their total income -- even as they work more hours. So there's still a huge hurdle for people trying to move out of poverty."

Whether those hurdles act as a disincentive to work is an open question, Maag said, but the new calculator reveals wide variation among states in how much and how quickly various benefits drop off. It also underscores the difficult trade-offs that poor and low-wage workers face as they attempt to better their lot.

Using the calculator, we might imagine our hypothetical mother living in Connecticut with her two young children and paying about $600 in rent. Like many mothers in similar straits, she receives no child support.

Given these inputs, Maag reckons that the mother would be eligible for roughly $18,000 in benefits from some combination of the federal TANF, SNAP and WIC programs (that is, Temporary Assistance for Needy Families, the Supplemental Nutrition Assistance Program and the Women, Infants and Children subsidy, respectively), as well as childcare and housing subsidies.

If the woman manages to find work that delivers just poverty-level wages of $17,000 annually, she'll immediately lose a chunk of her benefits to increased childcare costs and payroll taxes. Still, she can expect tax credits and other benefits to add another $16,500 to annual income, putting her at about $33,000 annually -- wages and benefits combined. That may be a decent combined income, but if the objective is to get the mother to a wage level that would make complementary government benefits unnecessary, the math becomes far more complicated.

Indeed, if our same Connecticut mother was lucky and persistent enough to earn $34,000 annually on her own, the new calculator reveals a swift retreat in benefits and a concomitant increase in taxes and childcare costs, eviscerating a substantive portion of that gain. Indeed, after all is said and done, doubling her own wages -- a feat that, at her skill level, would likely come less through increased wages and more by way of working more and longer hours -- would result in a meager $2,000 bump in total net income, after benefits are slashed. 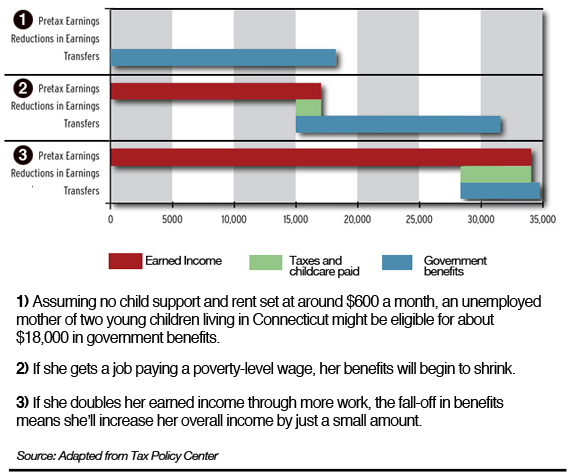 In other states, the bump might be even smaller.

The jury is still out on whether this discouraging math is evident enough on the ground to dissuade those receiving income support from climbing up the wage ladder, and Maag cautions that, in a world of finite resources, cut-off points are necessary. "The basic issue is that we don't have the budget to subsidize everyone," she said, "and we have to choose points where the benefits phase out."

Still, Magg suggests that governments could take steps to take the sting out of those decreasing benefits. One option: staggering or otherwise offsetting reductions in various benefits to make the fall-off less sudden and less steep.

Some states ease the blow better than others, but the new calculator -- among the most comprehensive in a growing ecosystem of online tools designed to educate lawmakers, activists and ordinary citizens on the tough choices impoverished Americans face every day -- calls attention to the vagaries.

By the most recent Census measure, some 46 million people are now living below the poverty line -- the highest rate ever recorded by the agency. Some 20 million of those are subsisting at less than half the official poverty line.

"As transfer programs are eliminated or reduced, we have to ask what's going to be left for people at the low end of the income ladder," Maag said. "Policy-makers can use this tool to see how states compare with one another, and I hope that it will also help everyday people to understand the plight of low-income families."