Despite five years of economic recovery, poverty is still stubbornly high in America.

More than 45 million people, or 14.5 percent of all Americans, lived below the poverty line last year, the Census Bureau reported on Tuesday. The percentage of Americans in poverty fell from 15 percent in 2012, the biggest such decline since the year 2000. But the level of poverty is still higher than 12.3 percent in 2006, before the recession began. (Story continues after chart.)

In this regard, the typical American household has suffered from a lost decade, and then some, noted University of Michigan economist Justin Wolfers. Stagnant income is a big reason why nearly half of all Americans think the recession is still going on, even though the National Bureau of Economic Research said it technically ended in June 2009.

Poverty always surges after recessions, as millions of people lose their jobs and incomes. In past recessions, poverty retreated fairly quickly from its extremes once the economy began to recover. That has not been the case in the past few recoveries, noted the Center On Budget And Policy Priorities, a think tank focused on poverty and inequality: 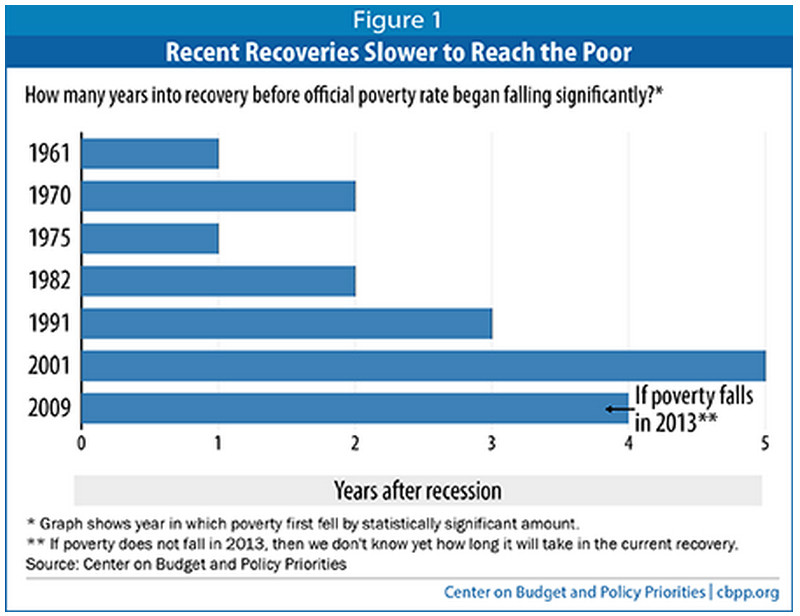 One cause of this grim trend could be that U.S. policy makers have increasingly ignored the needs of the very poor. In the latest recovery, the Republican-controlled Congress has slashed billions from the government food-stamp program and ended extended unemployment benefits that were helping more than a million long-term unemployed people.

These Census poverty numbers don't take into account government benefits such as food stamps and Medicaid. That could have a big effect on poverty levels. For example, if food-stamp benefits were counted as income, then about 3.7 million fewer people would be included in poverty, according to the Census Bureau.

The annual income threshold for being counted as living in poverty was $11,490 last year for a person and $23,550 for a family of four.

Poverty is particularly dire for single mothers: A third of all families headed by single women were in poverty last year -- that's 15.6 million such households.

The black poverty rate was 27.2 percent, unchanged from 2012 and higher than 24.3 percent before the recession began. More than 11 million black Americans lived below the poverty level last year. About 42.5 percent of the households headed by single black women were in poverty. The Hispanic poverty rate was 23.5 percent.