It's popular in conservative circles to quip, "We fought a war on poverty and poverty won."

Except it didn't. Yes, poverty rates are still way too high, especially for kids and minorities, but when we fought, we made significant progress against the enemy: economic deprivation amidst plenty. And when we ceded the field, the enemy advanced.

These important issues will be the subject of a conference hosted by the Center on Budget and Policy Priorities along with Demos, the Georgetown Center on Poverty, Inequality and Public Policy and the American Prospect. The goal is to examine poverty, the economic and demographic conditions that raise or lower it, and the policies designed to fight it in the United States since Michael Harrington's 1962 path breaking book, The Other America.

It has been fifty years since Harrington's exposé shed light on a side of America that many people didn't know existed. A world where babies died from malnourishment, seniors faced destitution when they were no longer able to work, and millions of families lived in substandard housing- often without indoor plumbing and running water.

In 1964 President Lyndon Johnson announced an "unconditional war on poverty in America." The reforms that followed in the coming years including the creation of Medicare and Medicaid, stronger food stamp and Aid to Families with Dependent Children (AFDC), or welfare, programs, and enormous improvements in education including the creation of the Head Start program, helped to expand opportunity and reduce poverty -- under the official poverty measure, which only counts cash income -- by half between 1959 and 1973.

Here's one piece of simple evidence clearly revealing that the "we lost" quip is flat out wrong. It's the time series of poverty rates of the elderly population (65+) from 1959 through 2010 (the Census Bureau has a data point for 1959--35.2%-and is then missing data until 1966, when the rate was 28.5%; I plugged in a linear interpolation between those years). When we undertook to use social policy, largely through increased Social Security benefits, to bring down elderly poverty, we kicked poverty's butt, from more than 35% in 1935 down to 15% in 1974, and settling into a 10% rate by the mid-1990s.

We can certainly have good arguments about whether even a 10% elderly poverty rate in the US should be acceptable. But it's a whole lot better than 35%. 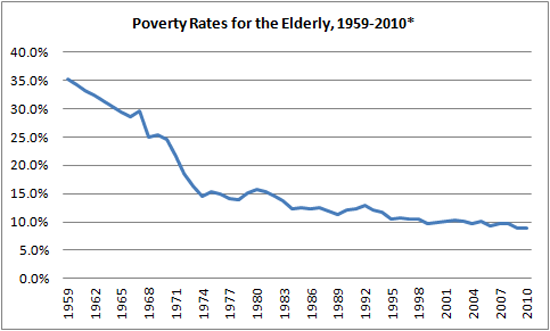 Tomorrow, my colleagues at CBPP, Robert Greenstein and LaDonna Pavetti, will join panelists from across the political spectrum to discuss the efforts we have taken over the past fifty years to reduce poverty, what we need to do to further hammer away at it, and what the face of poverty looks like in the 21st Century.

And you can watch the webcast, beginning at 9AM tomorrow here!

These days, too much of what passes for poverty policy are discussions of which safety net programs to cut. Well, fifty years after The Other America, it makes sense to step back and reflect on how far we've come, how effective our efforts have been, and how much further we have to go.