Keating, 48, used to make about $33 an hour as a housing counselor and assistant affordable housing coordinator for a small California city. But she's been out of work for the past nine months. Now she can't afford to pay $2,000 dollars in mortgage and property taxes each month without a California program that helps struggling homeowners. She barely covers her health insurance, bills and living expenses with the $900 unemployment insurance check she gets every two weeks.

"You don't want to be 48, asking your 80-something parents for help," said Keating, who lives in a three-bedroom house in Marin County, Calif. "There's a time every month where it's very scary and I have nothing. Right now I have $40 until my next check, which will be here on the 25th."

Keating is one of millions in this country just scraping by. Forty-five percent of Americans lack basic economic security, or the ability to pay for necessities like housing, utilities, food, health care, child care and transportation, according to a report released Monday by the nonprofit Wider Opportunities for Women.

The findings, which are based on working age adults' earnings and household incomes, underscore earlier research suggesting the federal poverty rate, announced at 15 percent by the Census Bureau on Tuesday, underestimates the true number of struggling Americans.

“The poverty rate is a very blunt tool. Although it does tell us about different demographic groups, it doesn’t really go much beyond that,” Shawn McMahon, acting president and CEO of WOW, told The Huffington Post. “It’s very important to focus on people who are living above the poverty rate but still lack the means for security. And there are millions of them.” 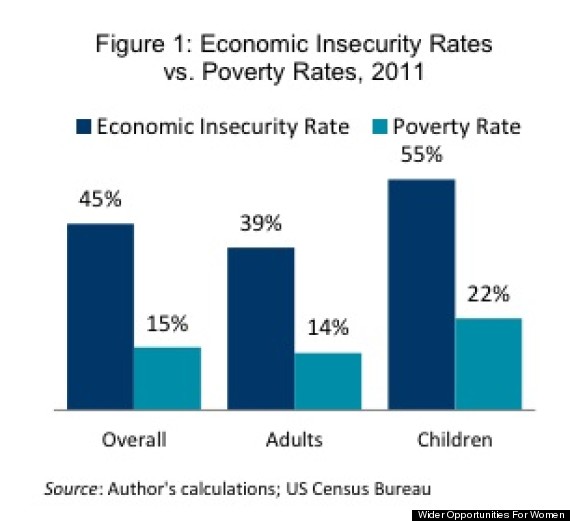 Indeed, in 615 cities across the country it takes a total income of at least twice the federal poverty line for a family with three or fewer children to afford basic expenses, according to a budget calculator developed by the Economic Policy Institute, a left-leaning think tank, earlier this year.

The official poverty measure, which is sometimes criticized for ignoring critical information like location and the cost of housing, is determined using the price of certain food staples nationwide and adjusting for inflation.

The large share of the population struggling to pay bills includes Americans of all types, the WOW report found. More than one-fifth of homes headed by a college graduate and 24 percent of Americans working full-time can't make ends meet, according to the report. Those statistics indicate that economic insecurity extends beyond the unemployed or little-educated, McMahon said. 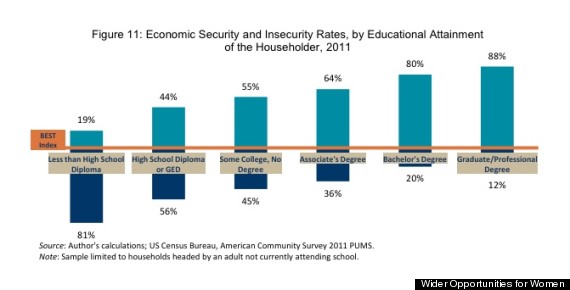 The low-wage recovery is largely to blame, McMahon said. Half of all jobs created in the past three years were in low-wage industries such as food services, according to a recent report from economists at the Royal Bank of Scotland.

Tyi Jones is all too familiar with this phenomenon. The 24-year-old Brooklyn resident has worked at a slew of retailers, including Victoria's Secret, Urban Outfitters and Forever 21. Jones said that at every outlet, she made slightly above the minimum wage, which wasn't enough to cover the nearly $1,000 she needed to pay rent, transportation and food costs. Like Keating, she sometimes ends up turning to Mom and Dad for help.

"We get into these quick jobs, just to get the quick money and then the money goes quickly," Jones said. She's now working at a Lego store in Manhattan, making $11 per hour -- way more than in her previous jobs. Though her situation is better than before, Jones, who had to drop out of college in part because she couldn't pay the bills, says money is still tight.

"I'm learning how to balance it," said Jones, who uses public assistance to cover some of her food costs. "I just have rent really to focus on, Metrocards and eating. I always know how to calculate how many hours I need to work in two weeks to save up enough."

As recent fast food worker protests across the country and battles in Congress show, raising wages may be an uphill battle. But one factor contributing to rising economic insecurity could be eliminated relatively quickly: Health care costs. Though President Barack Obama’s health care reform act has had little impact yet, better access to affordable health insurance could help lift many Americans out of a situation where they’re struggling to make ends meet, according to McMahon.

Still, McMahon said he doesn’t expect the economic insecurity rate, which has gone up steadily for the past several years, to tick down anytime soon. That rate is perhaps a better measure of the impact of the Great Recession than the poverty rate, which has declined and held steady since the height of the downturn in 2008.

“That casts a shadow of doubt over our common conceptions of the middle class,” McMahon said. “Middle class is generally thought of as the majority of Americans who live somewhere between poverty and being wealthy, but this suggests a paradigm that involves those who are secure and those who are not secure. That’s a different mental model and a different way of looking at the U.S. population.” 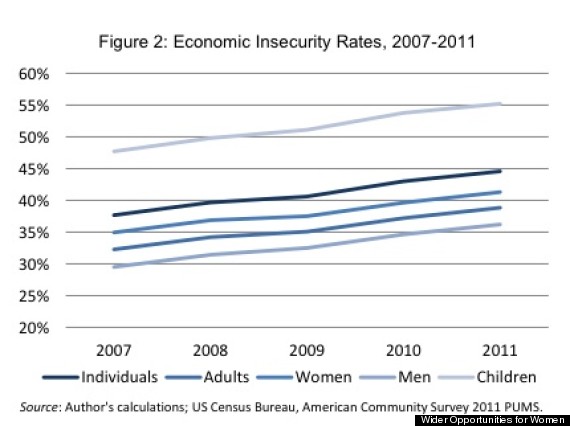