Written in collaboration with Jean Guo

There is finally a glimmer of hope in the fight against obesity, a critical public health and economic crisis burdening our nation. After several decades of steep upswings, the Centers for Disease Control and Prevention (CDC) recently reported that obesity rates in the U.S. may be stabilizing, with no significant change in prevalence over the past two years for children [1]. However, experts also warn of the major challenges ahead in the battle against obesity in America.

Despite the apparent recent leveling-off in childhood obesity rates, the prevalence of obesity nonetheless remains high, with more than one-third of adults and almost 17 percent of youth obese in 2009-2010. There are also significant concerns about the health and economic consequences that result from obesity-related complications. Diabetes, coronary heart disease, stroke, cancer, and osteoarthritis are just some of the illnesses associated with obesity that impose human suffering as well as significant medical costs [2]. In 2008, obesity-related medical expenses reached $147 billion, double the amount spent 10 years ago. This figure is projected to rise to $344 billion by 2018, underscoring the magnitude of the economic threat, as an estimated 50 million days of employment and $150 billion in productivity are lost annually in the U.S. due to overweight and obesity-related chronic conditions [3].

To address this health crisis, attention must be focused on a key issue that lies at the core of the epidemic: the social inequities of obesity. A significant body of scientific evidence links poverty with higher rates of obesity. Findings from the National Health and Nutrition Examination Survey (NHANES), the most comprehensive study conducted thus far to document the nutritional status of the U.S. population, has found that low-income children and adolescents are more likely to be obese than their higher income counterparts [4]. Additionally, reports have shown a higher prevalence of obesity among low-income adults. One study revealed that more than one-third of adults who earn less than $15,000 annually were obese, as compared to 25 percent of those who earn more than $50,000 a year [5]. Visually, a compelling correlation emerges when comparing maps detailing poverty and obesity rates in the U.S. (See images below) 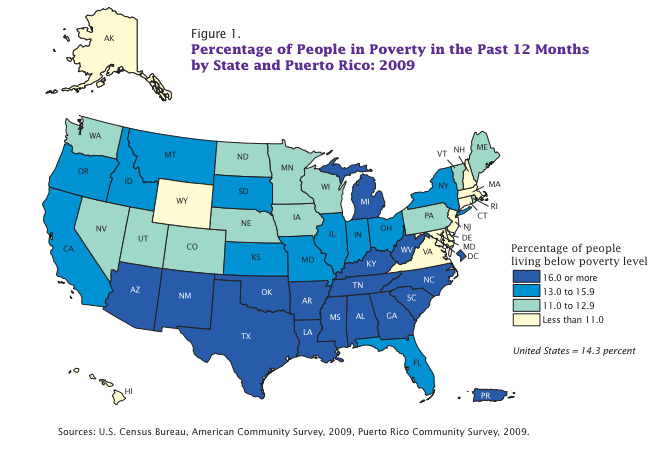 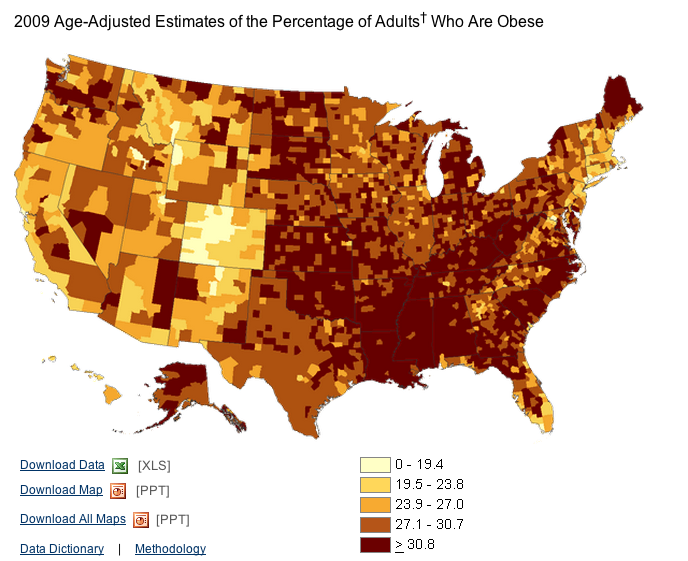 Major contributing factors to the disproportional impact of obesity on low income populations in America include the barriers faced by people living in poverty in accessing healthy foods, a lack of nutrition education, a dearth of safe environments for physical activity and recreation, and food marketing targeted to this population. Population level data have shown that diet quality follows a socioeconomic gradient. People with higher socioeconomic status (SES) are more likely to consume whole grains, lean meats, fish, low-fat dairy products, and fresh vegetables and fruit. In contrast, lower SES is associated with the consumption of more refined grains and added fats [6].

Simply stated, families with limited economic resources may turn to food with poor nutritional quality because it is cheaper and more accessible [7]. Lack of physical activity is another commonly-cited problem fueling the obesity epidemic in America. Some low-income families live in neighborhoods where it is dangerous to play outside, reducing opportunities for both children and adults to exercise [8]. Furthermore, many low-income communities lack access to fresh and nutritious food. Instead of a supermarket, these neighborhoods may have an abundance of fast-food retailers and corner stores that are stocked with products high in fat and low in nutrients [9]. Additionally, low-income families are often targeted by food marketers with advertisements encouraging the consumption of nutrient-poor foods. In this environment, children in low-income families are especially hard hit, as evidence demonstrates that consistent exposure to such advertising increases the likelihood of adopting unhealthy dietary practices [10].

Therefore, in developing a strategy to reverse the obesity epidemic in America, a comprehensive "health in all policies" approach must be implemented. A roadmap to reverse obesity will not only tackle health and nutrition issues, but also focus on the underlying social and environmental factors that contribute to this public health problem. Decades of scientific research have revealed that our health habits and environments -- the choices people make regarding tobacco use, alcohol, food, and exercise, and the communities in which they live with their transportation systems, workplaces, grocery stores, and schools -- all impact health. Thus, a broad range of strategies are needed to address the individual, social and environmental factors and their interactions that affect people's health-related behaviors.

At the national level, several initiatives have been launched to address these fundamental issues. The Affordable Care Act 2010 has mandated inclusion of menu labeling in restaurants and on vending machines, the Healthy Hunger-Free Kids Act 2010 has set nutrition standards for foods served in schools and child care facilities, and the increase in the number of Baby Friendly hospitals has expanded efforts to promote breastfeeding [11]. Furthermore, First Lady Michelle Obama's Let's Move Campaign is mobilizing all sectors of society to get involved in reversing childhood obesity rates within a generation. As part of this initiative, the Child Care State Challenge is encouraging the adoption of voluntary standards for physical activity, limits on screen time, healthy beverages, and promoting the availability of healthy foods in child care settings.

At the community level, new affordable housing neighborhoods like Greenbridge, Washington (located in King County near Seattle) are being designed and built as models for creating an environment that promotes healthy diets and active lifestyles for their residents. In this predominantly immigrant community where more than 15 languages are spoken, more than 54 percent of adults are overweight or obese, and more than 85 percent of adolescents in grades 8, 10, and 12 do not meet the physical activity recommendations set by the federal government [12]. Supported by Healthy Kids, Healthy Communities (HKHC), a national program funded by the Robert Wood Johnson Foundation that promotes community-based solutions, Greenbridge focuses on shaping the environment to encourage healthy behaviors among families, with special attention to children who are at the highest risk. Thus far, a comprehensive set of measures has been put in place to foster the development of a healthier community. In addition to an elementary school, a Head Start program, and a Boy and Girls Club, this new affordable housing initiative offers community gardens to grow fresh fruits and vegetables, a library, as well as play areas, parks, and walking paths. A food bank, a public health clinic, and a community center that provides free exercise classes are located just a few blocks away.

This integrative approach has turned a troubled neighborhood into a welcoming place to live. This new community emphasizes the importance of cultivating a nurturing environment for youth, especially as children and adolescents constitute over a quarter of the neighborhood's population.

Initiatives like this one that involve not only individuals but the entire family and community provide a model for how to improve the health of cities across our nation. Targeting only one aspect of the problem will not be effective in fighting the obesity epidemic, since many of its causes stem from broad social and environmental factors. Moreover, to effectively confront the disproportionate impact of obesity on low income populations, the social determinants of health -- including the significant disparities that poorer people experience -- must be addressed.

Communities are the cornerstone for preventive interventions that increase the accessibility of fresh foods and physical activity, implement policies to reduce the marketing of unhealthy foods to children and adults, and help make healthy nutritional choices easier and affordable. In this regard, public-private partnerships are critical in bringing families, businesses, health care organizations, government and other stakeholders together to reverse the impact of obesity in our country.

Margaret Mead once said, "Never doubt that a small group of thoughtful, committed citizens can change the world. Indeed, it is the only thing that ever has." To contribute your perspectives and ideas on ways to tip the scales on obesity and make the changes needed for healthier communities and a healthier country, visit www.SNAPtoHealth.org, an online forum on the state of nutrition in the United States. While the path to reversing the obesity epidemic in America is challenging, by working together, we can ensure a healthier future for all Americans.

Rear Admiral Susan Blumenthal, M.D., M.P.A. (ret.) is the Public Health Editor of the Huffington Post. She is the Director of the Health and Medicine Program at the Center for the Study of the Presidency and Congress in Washington, D.C., a Clinical Professor at Georgetown and Tufts University Schools of Medicine, Chair of the Global Health Program at the Meridian International Center, and Senior Policy and Medical Advisor at amfAR, The Foundation for AIDS Research. Dr. Blumenthal served for more than 20 years in senior health leadership positions in the Federal government in the Administrations of four U.S. Presidents, including as Assistant Surgeon General of the United States, the first Deputy Assistant Secretary of Women's Health, as a White House Advisor on Health, and as Chief of the Behavioral Medicine and Basic Prevention Research Branch at the National Institutes of Health. Admiral Blumenthal has received numerous awards including honorary doctorates and has been decorated with the highest medals of the US Public Health Service for her pioneering leadership and significant contributions to advancing health in the United States and worldwide. She is the recipient of the 2009 Health Leader of the Year Award from the Commissioned Officers Association and was named as a Rock Star of Science by the Geoffrey Beene Foundation and GQ magazine.

Jean Guo is an undergraduate student at Stanford University who is currently studying in Paris. She served as a Health Policy Intern at the Center for the Presidency and Congress in Washington, D.C.

[1] U.S. Department Of Health And Human Services. National Center for Health Statistics. Prevalence of Obesity in the United States, 2009-2010. Jan 2012, available at http://www.cdc.gov/nchs/data/databriefs/db82.htm.