In the Room for Debate feature over at the New York Times, Julila Isaacs makes an interesting linkage between lower child poverty rates and higher rates of income mobility. She points out, for example, that Scandinavian countries maintain both lower child poverty rates and more upward mobility. Correlation not being causation, that's not proof, but it makes sense. It's also consistent with a fascinating strain of recent literature that tracks people from when they were kids into adulthood to gauge the lifetime impacts of anti-poverty measures of policies like food stamps, Head Start, EITC, and so on.

But here's an important add-on point to her argument: these countries' lower poverty rates are not of function of their "free markets" -- they are a function of their anti-poverty policies. If you look at their poverty rates as calculated by the OECD (see figure below), before their tax and transfer systems kick in, there's as much or more poverty in Finland or Sweden as in the U.S. (Note: the OECD defines poverty as income less than 50 percent of the national median.)

Denmark reduces market poverty by 75 percent; Sweden by two-thirds; Finland by 80 percent; the U.S., by only 40 percent.

So, to the extent that the difference in child poverty rates between here and Scandinavia is a driver of our immobility relative to theirs, that's not some immutable market outcome. It's a policy variable. Moreover, in the age of inequality, such anti-poverty policies are more important than ever, as higher inequality creates both more poverty along with steeper barriers to getting ahead, whether through the lack of early education, nutrition, adequate housing, and a host of other poverty-related conditions that dampen ones chances in life.

(Another note: these are poverty rates for all persons; I couldn't find OECD pre/post rates for kids, but the point still holds -- kids' poverty is a function of their family's income.) 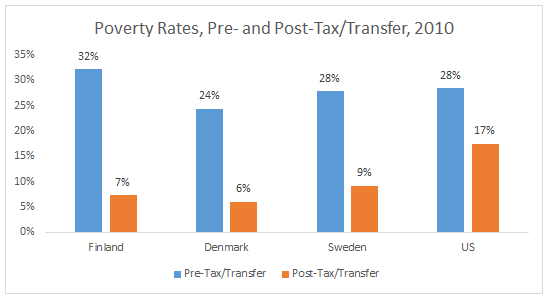