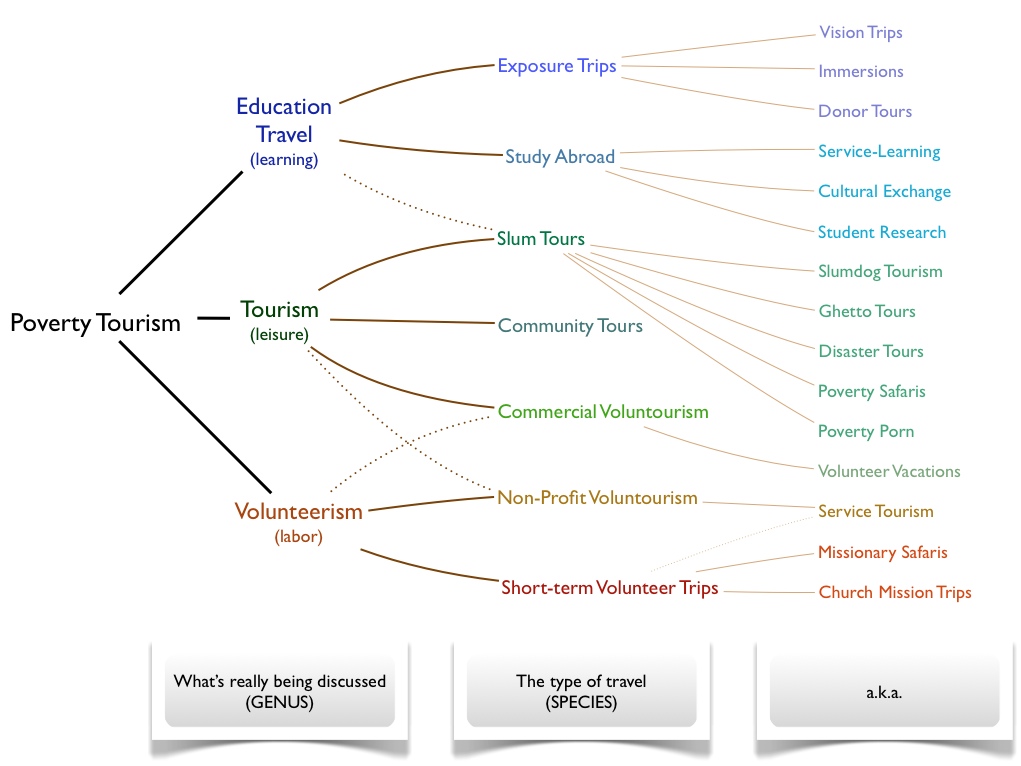 The ongoing debate on poverty tourism got a paroxysm of blogger attention following the recent op-ed in The New York Times by Kennedy Odede, whose personal experience gave him harsh words for what he called Slumdog Tourism. A good assemblage of recent blogs and articles related to the poverty tourism debate is posted at Good Intentions Are Not Enough. As I followed the debate, I realized that the nebulous meaning of "poverty tourism" had many bloggers and commentators talking past each other. A couple of weeks ago I posted my contribution to the debate as a taxonomy of the terms used. The intention of that first post -- Poverty Tourism: A Debate in Need of Typological Nuance -- was that with linguistic clarity, the debate could be more productive and less shrill. The post became popular and the word "tree graphic" was reproduced and discussed on a number of blogs and websites, which provided ample feedback leading to this Poverty Tourism Taxonomy 2.0. To avoid a rerun, I'm only providing a few updated notes here; for a more complete explanation of the taxonomy, please refer back to the original post.

Although it sounds straightforward enough, the term poverty tourism has been used to describe a range of travel types involving distinct types of travelers and purposes. The term is most often used disparagingly. An alternative term used more by those highlighting positive aspects is "development tourism." Both terms are used to discuss three quite different genus-level travel types: education travel, tourism and volunteerism. Each of these implies a distinct purpose: learning, leisure, and labor, respectively. These are not mutually exclusive, of course; many people travel with mixed motives. The distinction is useful, however, because the primary travel motive informs the way the travel is designed and conducted. For example, a university designing a study abroad trip might include volunteer work, but the primary motive is student learning. This informs the focus of the travel and defines in large part what a "successful" trip will look like. Likewise, a nonprofit organization hosting a group of voluntourists may be mindful of both the learning and leisure motives of the travelers, but they will have a primary focus on the labor that is to be done. Dotted lines in the graphic make explicit some travel types where mixed motives are integral to the travel design.

Again, to avoid a rerun, I'm not going to describe the meaning of each of these species-level travel types here, but rather refer you back to the original post, "Poverty Tourism: A Debate in Need of Typological Nuance."

The list of "also known as" terms is by no means comprehensive. I'm getting introduced to new terms almost daily, including "pet-the-orphan tours", "cultural zoo trips", and any number of creative, mostly disparaging terms. The purpose of listing any of these is to show how the taxonomy can help us sort such terms into a linguistic system that facilitates greater clarity. So, although done, one shouldn't use the term "poverty safari" to talk about a non-profit voluntour. It's true that a voluntourist may gawk at the locals and snap inappropriate photos, but the type of travel he is doing is not defined by these behaviors, but rather the purpose of the travel as designed by the host. Likewise, you shouldn't use "missionary safari" to talk about a group of donors from a Christian non-profit that are visiting the projects they help fund. These are just fundamentally different types of travel. Its fun to invent and throw around deprecating terms at people traveling through poor communities, but without at least some care to use terms that actually link back to the intention of the trip, it makes debating the merits or dangers of such travel difficult.