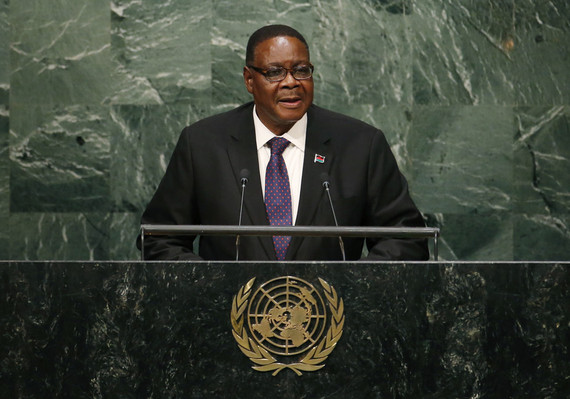 The President of Malawi, Peter Mutharika, finally returned home after a month-long absence. His still unexplained absence led to speculation that he had either gone awol or was hiding debilitating illness. The failure by his government to explain his whereabouts only served to fuel the speculation.

Mutharika landed in New York on September 16 for the UN general assembly, which ended on September 26. As it is always the case in Malawi, the reports about his trip were dominated by issues about the size of his entourage. Malawi's presidents always travel with a team of cronies and hangers-on at the expense of the Malawi taxpayers.

When Mutharika finally returned on October 16, he only used his left hand to wave at and greet people who welcomed him at the airport. Given that he is right-handed, the use of his left hand and the seemingly inflexible right hand gave credence to the rumours that he had been receiving medical treatment in America.

He didn't hold the customary press conference for Malawi presidents returning from official duties. Instead the president held a press briefing five days later. He told the nation that he was in good health and that he only used his left hand because he was diagnosed with rheumatism on his right. He was not moving it, he explained, because he had received an injection on his way back home.

One needs to understand Malawian politics in order to appreciate this bizarre episode in which a state president can be unaccounted for.

That Malawi's vice president, Saulos Chilima, was not mentioned at all during this episode is revealing. After considerable social media pressure, Mutharika's communication team was eventually forced to respond about their president's whereabouts.

But the team's response to what were serious questions on a matter of public interest question bordered on contempt. Mutharika's spokesperson retorted that the president was running the country via Skype. Yet the vice president is supposed to assume full presidential duties in the absence of the president.

Whatever the state of the president's health, it is clear that the government has lost control over public opinion and has a huge task to regain public trust. To paraphrase James Freeman Clarke, the difference between a politician and a good leader is that a politician thinks about the next election while the good leader thinks about their country. Mutharika may yet be controlled by those who benefit from his presidency but it is his legacy that is at stake.

What was more peculiar was the fact that even the state media, which follows the president everywhere and publishes all the trivia about him, was silent this time. Speculation abounded about what was happening.

Malawians took to social media - mostly twitter and Facebook - demanding to know the whereabouts of their president, using the hashtag #BringBackMutharika.

The silence about the president's absence continues to feed speculation, including that he is seriously ill. Pictures of him on his return appear to support this, even though he looked much healthier and energetic giving a press briefing five days after his arrival. But then people are justified in their suspicions given a history of African leaders hiding illness.

In the case of Mutharika the main fear is that his absence will result in his vice president, who is an outsider to the party, ascend to power. This is similar to thee way that then out of favour vice president Joyce Banda, succeeded the late Bingu wa Mutharika following his death in 2012.

Admitting to ill health would mean that the vice president would have to take over presidential duties until Mutharika is in a position to return to the office. As it is at the moment, this is the most plausible explanation for the information blackout.

Another reason proffered for his absence is that he was on vacation. After all, the president lived and taught law in American universities for over 40 years and his children are residents there.

The claim that he was working remotely remains doubtful given the lack of coverage of this by the state media and absence of any evidence.

The silence over his whereabouts has everything to do with internal ruling party politics. The vice president is an outsider within the ruling Democratic Progressive Party. He was picked from the corporate world to run as Mutharika's running mate on the eve of May 2014 elections. Chilima was chosen for his youthfulness and achievements at Airtel (Malawi) where he rose through the ranks to become the company's chief executive officer.

For the ruling party, the problem with Chilima is that no one can stop him assuming full presidential powers in absence of Mutharika, as this is constitutional. Therefore it is crucial for those wishing Chilima out to insist that Mutharika is in charge even when this may not be the case.

Ultimately, Malawi is bound to pay for such politics as it has the capacity to leave a power vacuum. At the moment Malawians are enduring daily power cuts, eight hours on average. Residents of Lilongwe, the capital city and its main commercial city Blantyre, are going days, sometimes weeks without running water.

Polytechnic, a constituent college of University of Malawi has failed to open due to fees increase stand off between students union and the university council. Yet, petty politics has taken precedent.

Jimmy Kainja, Lecturer in Media and Communications, University of Malawi