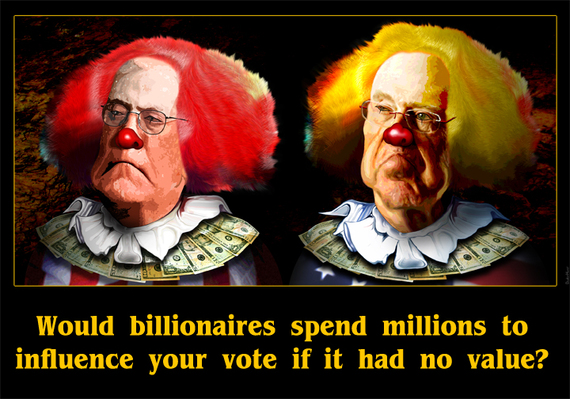 Liberty. Power. Government. The way one frames the equation that connects these three words is at the heart of any political philosophy. The passage of a law in Wyoming got me thinking again about them. Wyoming just made it a criminal act to gather and submit to the government any kind of data -- including photos -- derived from privately owned land. In other words, if one documents pollution on private property and informs the authorities, one is breaking the law. This ridiculous statute is almost certainly unconstitutional, so rather than discuss it in detail, I want to use it as a jumping off point to explore the anti-government philosophy -- and in particular, the motivations for it -- that underlay the law.

Supporters of laws like this one love to talk broadly about liberty, property rights and protecting the freedom of individuals from government overreach. All of these things are fine in the abstract. I also want to be free, to have liberty, to be protected from a tyrannical government taking my stuff. Who wouldn't?

However, this a simplistic, one-sided way of looking at things. Libertarianism -- an ideology also embedded within its far more potent cousin, anti-government conservatism -- is incredibly simplistic. Ayn Rand -- whose fictional works strongly appeal to the anti-government right -- is such a perfect example of this simplicity that we have this bit of wisdom from John Rogers:

There are two novels that can change a bookish 14-year-old's life: The Lord of the Rings and Atlas Shrugged. One is a childish fantasy that often engenders a lifelong obsession with its unbelievable heroes, leading to an emotionally stunted, socially crippled adulthood, unable to deal with the real world. The other, of course, involves orcs.

There's something lurking behind the seemingly straightforward ideology of "small government," something obvious to anyone willing to look: Greed. Simple, unadulterated greed. Here's the thing about greed. By itself, it doesn't lead to great wealth. For greed to bring great wealth, one has to have the opportunity to act on it, and enough power to take those actions in spite of any potential interference. There's a reason why Ayn Rand's heroes are powerful elites. Those are the people who benefit most when government is too weak and small to interfere with their power grabs.

But these elites can't talk about the issue of power as openly as this. After all, how many people would support a political approach that says: Let's get government out of the way so a few of us can vacuum up as much of your wealth as possible. But make no mistake, that is exactly the purpose behind the anti-government, right-wing agenda pushed by people like the Koch brothers.

It's always the people who want to exploit or oppress others, or take actions that harm the rest of us, who have a vested interest in stoking anti-government hatred among regular people. That's why their greatest champion, Ronald Reagan, built his first inaugural address toward the great crescendo moment when he uttered the words that the elites need the masses to believe: "Government is not the solution to our problem; government is the problem." The elites and their political puppets talk about liberty and property rights, and that's how they get ranchers in Wyoming worked up about government supposedly interfering with their family business. In reality what the elites want is to make sure government doesn't interfere with the billion-dollar businesses they control.

Power is a zero sum game. There is only a certain amount of power that exists in a society. People who want to use their private power to dominate a society need a weak government so that they can exercise their own power widely, without interference. What anti-government conservatives don't want regular people to understand is that government can also exercise power on their behalf.

Can a government have too much power over its citizens? Of course. However, when government is too weak, the power it does not exercise is distributed in a highly unequal manner. That unexercised government power flows disproportionately to those with the resources to use it. And that ain't regular people.

The Kochs and their fellow elites need people to hate government, and to be so distracted by that hatred that they allow the passage of laws -- such as the one in Wyoming discussed above -- that enable those elites gain ever more power. We need the American people to understand that -- as things currently stand -- reducing our government's power doesn't make the rest of us more free; it doesn't increase our liberty. It just places more and more power in the hands of a small, unelected few who are accountable to no one.