Here they are! The mature female role models are rolling in, and I have to say I think they are fantastic; stronger and more powerful than almost any other generation before and after them. Of course, right now we are watching history being made by having 69-year-old Hillary Clinton knocking -- make that banging! -- at the White House door, not as First Lady but First Commander-in-Chief with a mission. I for one am hoping she gets in for good and shakes up the place!

Michelle Obama also gave a rousing speech the other day -- and the most important subject to her was mentoring, opening doors, smashing glass ceilings -- and being a role model for young women like her daughters.

Meryl Streep, another great and feisty woman who is a staunch Hillary supporter, also had passionate and incendiary words at the Democratic Convention. She, too, is a mother of three grown daughters; she knows how important it is to see intelligent and uppity older women with ideas calling the shots while not having any resemblance to models or overrated pop-stars.

Young girls and women look at other women, all women, not just their contemporaries -- and not just to check what they're wearing. They do it longingly, thirsty for shaping their identity, but also waiting to be inspired and picking up pointers for their own life in the making.

"Who will I become in this exceedingly exhausting and demanding world? Will I thrive and survive?" they wonder. There's quite a bit of internal "homelessness" going on -- it's not only for the poor and downtrodden. I personally don't know the whole answer but I've got ideas.

So when last week a young woman said to me, "I love your views, really cool!" because of something "feminist" I said, I found myself feeling uplifted. Seems that the biggest thing young women expect from, and like about, us older chicks: Our own voices. Got that, Melania Trump?

That is good news because with age comes also a time when you ask yourself and the women around you: Now that we've accumulated so much knowledge, experience and clever know-how that we burst at the seams, what are we going to do with all? Hide it, play it down, toss it aside as an insignificant byproduct of life with an expiration date?

You want to give and share, enlighten and enrich. You would almost do it for free, right? Do it! That's my advice. I for one am proud about becoming what I secretly hoped to become one fine day: A mentor and role model.

I was a loner as a young woman. Me against the world. Nobody ever told me that I could do or be anything I wanted. And still, that's what I deep down believed in. I had no female role models, not living ones anyway in my traditional European background.

My mom was a lovely and stylish beauty but a slave to household and husband. I wanted to kick the world's ass and not be known for being very feminine and pliant! And I think I want that to be the most important message to younger women. Do it! Go for it! Risk rejection and ridicule but HANG ON! Hillary got where she is by perseverance and very hard work. You don't have to love her to respect and admire her!

"You give me hope," another very young woman told me. I think I blushed, and my eyes got a little moist at the corners. Thank you thank you thank you! Couldn't think of a greater compliment.

Yes, indeed -- they do look at us seasoned survivors, their mothers, grandmothers, aunts -- and they see their future. For us they represent our past. They still wait for theirs; we've been where they are now. So we're ahead of them, and ready to give back.

I had always hoped that all my experiences, the joys and pains, the discoveries and resolutions -- and finally gaining some bits of wisdom -- weren't in vain. Maybe they aren't! Whoever fully brakes the glass ceiling -- it will be a joyful day, and no woman will want to pick up the pieces! 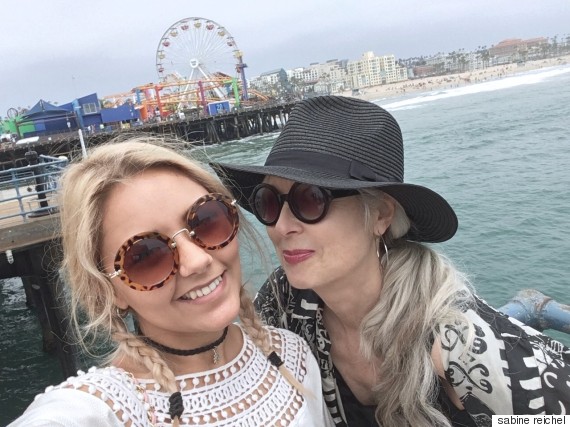 GRAY IN LA.: Power-Moms On Parade
5 Inspiring Female Entrepreneurs Over 50