WASHINGTON -- While the attention of political junkies may be focused on broader polls of likely caucus-goers in Iowa, Mitt Romney has been steadily gaining ground among a narrow but critical group: local Republican activists and officeholders in Iowa and other early caucus and primary states.

On the eve of the Iowa caucuses, the latest Power Outsiders survey conducted by The Huffington Post and Patch shows that such support for Romney grew steadily in December. Perhaps just as importantly, these highly attentive political activists believe Romney is poised to win Iowa.

The Power Outsiders poll is an ongoing effort to reach out to local Republican activists, party officials and officeholders to observe the "invisible primary," generally a strong leading indicator in presidential nomination contests. This week, we interviewed 179 power outsiders: 47 in Iowa, 59 in New Hampshire, 60 in South Carolina and 13 in Florida.

Since we found considerable uncertainty among these activists in early December, with only about one-third having publicly endorsed a candidate, we have opted to track their preferences in the weeks leading to the early primaries.

Four weeks ago, the respondents were divided principally between Romney and Newt Gingrich. But Romney has steadily gained backers during the last four weeks, rising from 26 percent to 37 percent support, while Gingrich's support dropped from 27 to 20 percent. Meanwhile, support for Rick Santorum doubled, from 6 to 13 percent. 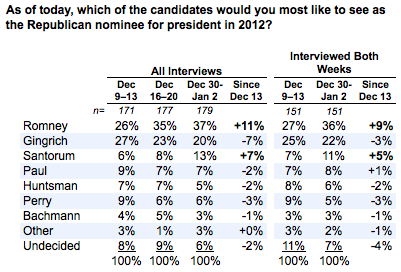 If we narrow our focus to the 151 respondents who participated in both this week and four weeks ago, we see that most -- 71 percent -- have continued to support the same candidate they supported in early December. Romney, however, clearly gained most among those who shifted their preference, boosting his support from 27 to 36 percent of those interviewed both times.

Perhaps the best news for Romney is that his current support among the 47 local activists we interviewed in Iowa (40 percent) is nearly as high as among those we interviewed in New Hampshire (42 percent). Our sample size is small, but Romney's support from the party actors in Iowa has remained stable throughout the last two weeks. 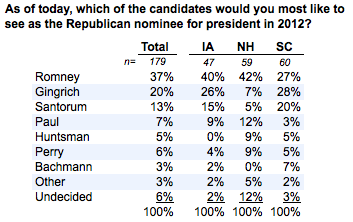 These local Republican activists have also grown more certain about their choices, with 75 percent now saying they will definitely support their first choice, up from 61 percent two weeks ago. Still, one in four say on a follow-up question that they may still change their mind about which candidate they will support (18 percent), remain completely undecided (6 percent) or are unsure how certain they are (3 percent). 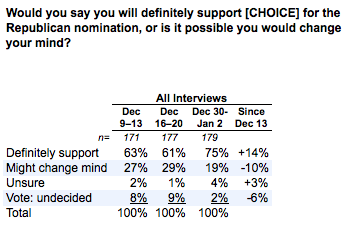 Another good sign for Romney is that overall, his support is the most solid among the party actors we interviewed, with 88 percent saying they will definitely support him. Certainty varies between 65 and 70 percent for Michele Bachmann, Gingrich, Romney and Santorum. 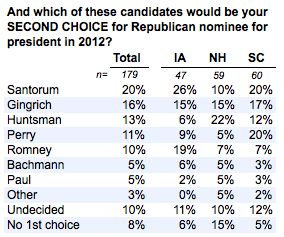 The most intriguing finding in this week's survey is that Romney dominates in all of the states when it comes to expectations about who will win the Iowa caucuses on Tuesday. Nearly half of the full sample of power outsiders (48 percent), and a greater proportion of those interviewed in Iowa (57 percent), believe Romney will win. Twenty-six percent overall, and 19 percent in Iowa, believe Ron Paul will win. And despite news coverage of polls showing an apparent surge of support toward Santorum, only 8 percent of the full sample and 6 percent of the power outsiders in Iowa believe Santorum will likely finish first there. 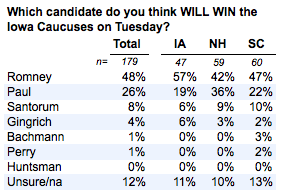 We also asked our respondents to guess at the percentage of the vote that each candidate will receive in Iowa (using a web form that assisted them in choosing answers that totaled to 100 percent). While about half believe Romney will win, most appear to think the result will be close, with an average guess of 24.3 percent for Romney, 23.1 for Paul, 16.6 percent for Santorum and 15.4 percent for Gingrich. 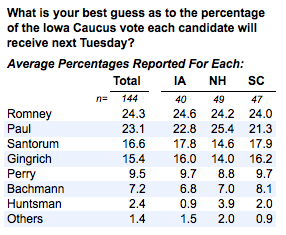 These responses bear a strong similarity, on average, to the current poll averages reported by websites like Pollster, Real Clear Politics and FiveThirtyEight over the last few days. Power outsiders are highly attentive political activists, so it should not come as a surprise that they have seen the latest polls, but it is intriguing that for all the discussion of a Santorum surge, few in either Iowa or the other states expect the surge to propel the former Pennsylvania senator to victory.

What makes this result intriguing is research by economist David Rothschild showing that answers to the question, "Who do you think will win the upcoming election?" have had considerable success in predicting election winners. At a recent briefing for reporters hosted by Gallup, Rothschild speculated that the expectation question is a successful predictor because it carries "the information that a person has about just themselves" but it is also provides "some information about their social network" -- how individuals believe others they know will vote.

Rothschild argues that these sorts of questions are comparatively more accurate in predicting primary elections, where preelection polls have a harder time determining who will actually turn out to vote -- particularly in Iowa, where turnout is generally low.

The political science that inspired the Power Outsiders survey argues that the preferences of local party "actors" like the power outsiders may help to influence the choices of rank-and-file voters. If those same activists have a good sense of how the ordinary rank and file they know will vote, especially in Iowa, then Mitt Romney has another reason to be encouraged about his chances in Iowa on Tuesday.

Our surveys are not a scientific random sample of any larger population but rather an effort to listen to a swath of influential local Republican activists, party leaders and elected officials in Iowa, New Hampshire, South Carolina and Florida. All of the individuals listed below have agreed to participate in the surveys, although not all responded to this week's questions. Interviews were conducted between Dec. 30. 2011 and Jan. 2, 2012.