WASHINGTON -- When Newt Gingrich and Mitt Romney squared off on immigration in a televised debate two weeks ago, some conservatives argued that in advocating "humane" treatment for long-time undocumented immigrants, Gingrich had severely wounded his candidacy.

Yet the latest Power Outsider survey conducted by The Huffington Post and Patch suggests that, if anything, influential local Republicans in the early caucus and primary states are rallying to Gingrich's side of the immigration argument. A majority of the local insiders said Gingrich would do a better job than Romney on immigration, and just as many choose Gingrich's position on immigration over Romney's when presented the ideas without their names attached.

The Power Outsiders poll is an ongoing effort to reach out to local Republican activists, party officials and officeholders in the early primary and caucus states to observe the critical "invisible primary," usually a strong leading indicator of voters' preferences in presidential nomination contests. This week we interviewed 183 Power Outsiders: 50 in Iowa, 61 in New Hampshire, 61 in South Carolina and 12 in Florida.

When asked to choose the candidate that would do the best job handling illegal immigration, Gingrich holds a narrow lead over the rest of the field, just as he did when we asked the same question four weeks ago. Twenty-four percent of respondents said they supported Gingrich, with 16 percent and 15 percent supporting Romney and Rick Perry, respectively. Ron Paul garnered 11 percent of the vote, and Michele Bachmann had the support of 10 percent, while the other candidates polled in single digits. 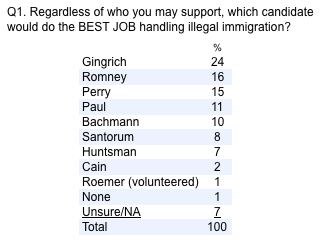 When HuffPost asked respondents to choose between Gingrich and Romney on immigration, however, the former speaker holds a much bigger lead (52 to 27 percent). That advantage is even larger among our Power Outsiders in Iowa (60 to 28 percent) and South Carolina (61 to 16 percent). Though Romney has more support in New Hampshire, the state's Power Outsiders divide almost evenly (38 percent Romney and 36 percent Gingrich). 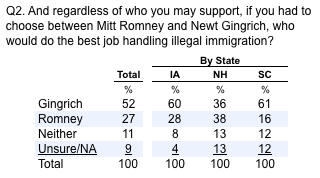 Just as important, these local Republican activists side with Gingrich on the substance of his immigration argument. When asked to choose between giving undocumented immigrants who have been here 25 years or more a "path to legal status" or giving such immigrants "no special pathway to citizenship or permanent residency," they choose the Gingrich proposal -- the path to legal status -- by a 53 to 33 percent margin.

One puzzling aspect of the results is that when we tested these positions separately, both the Romney position and the more-hardline approach of deportation advocated by Michele Bachmann generate more agreement. A large majority (60 percent) agrees with the Gingrich proposal, but far more agree with the Romney and Bachman positions (68 and 76 percent respectively). 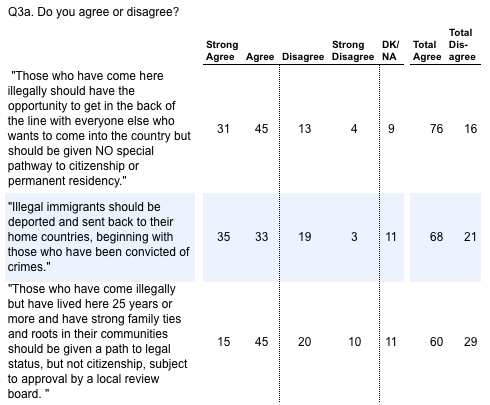 Why the apparent contradiction in the results? Statistically, the answer is clear: A very large number -- 40 percent -- agrees with both the Gingrich and Romney positions. When asked to choose between the two, those who agree with both statements side with the Gingrich proposal by a huge margin (78 to 8 percent). 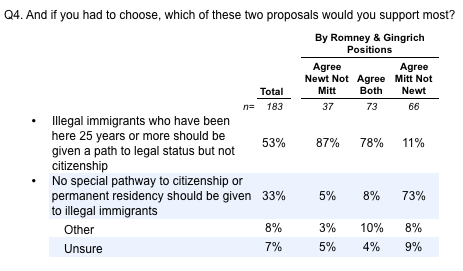 So what is happening here? The modest differences between the Gingrich and Romney positions on immigration may not be obvious even to these well-informed local Republican insiders. Keep in mind that we did not attach the candidates' names to their positions.

It is also quite possible that Gingrich's position "simply carries the day," as George Washington University political scientist John Sides tells The Huffington Post via email, "even among those who also agree with Romney's position." Sides adds that a preference for the Gingrich position "would be consistent with Nate Silver's finding that GOP voters are certainly not unified behind the most punitive measures; many support a position similar to Gingrich's."

Some may also feel slightly personal greater agreement with the harder Romney line, but as practical politicians also understand that "this Hispanic vote is very important," as one New Hampshire respondent put it on a final open-ended question. Or they simply see immigration as a big challenge. When offered the opportunity to explain their answers, a number of the Power Outsiders describe immigration variously as a "challenging topic," an "extremely difficult issue [that] will require great leadership" or an issue "too serious an issue to demagogue."

Like any measurement of public opinion, these results are just a snapshot. Views of Newt Gingrich and his position on immigration are likely to change, particularly if they come under repeated assault in the upcoming candidate debates. For now, however, Gingrich's stand on immigration does not appear to be hurting his cause with local Republican insiders.

Our surveys are not a scientific random sample of any larger population but rather an effort to listen to a swath of influential, local Republican activists, party leaders and elected officials in Iowa, New Hampshire, South Carolina and Florida. All of the individuals listed below have agreed to participate in the surveys, although not all responded to this week's questions. Interviews were conducted between Dec. 2 and Dec. 7, 2011.