Last week was a busy one for those still harboring cases of Beatlemania. Martin Scorsese's documentary about George Harrison premiered, John Lennon was remembered on what would have been his 71st birthday, and Paul McCartney wed for the third time.

Add a visit from the Power Rangers to the list.

In this photo taken on October 7th, a group dressed as a new iteration of the toy and TV-based intergalactic crime fighters recreated the Beatles' famed "Abbey Road" cover, marching through the famed crosswalk outside the studio. We could make up some symbolism, like how the seemingly invincible Power Rangers represent the undying legacy of the Beatles, or how, like early Beatlemania, young people went crazy for Ranger toys and videos, or maybe even how they're all different colors, representing the band's latter day message of peace.

But mostly, it's just a goofy picture. And hey, that's alright with us. 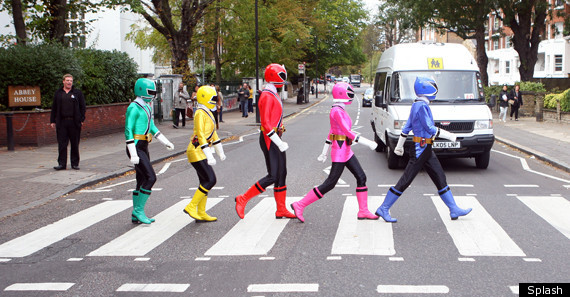