If I could still do a cartwheel, I would have done one that day. As I stood for hours in a long line with my friends and thousands of others in anticipation of seeing and hearing two of the most admirable women of our lifetimes, Hillary Clinton and Michelle Obama, I saw two young girls doing cartwheels on a patch of green grass in the parking lot at Lawrence Joel Veterans Memorial Coliseum at Wake Forest University in Winston-Salem, NC.

And I wanted to join them! I wanted to express--in a burst of youthful vitality--my joy, exuberance and enthusiasm at being there. I was invigorated and cheerful, and as I watched those two young girls, I recalled being that young and limber and uninhibited in just popping off a few cartwheels when I needed an outlet for my boundless energy. Decorum, plus the fear of real physical injury, kept me from joining them, though I was experiencing a flood of glee and youth and hopefulness that belied my 61 years. 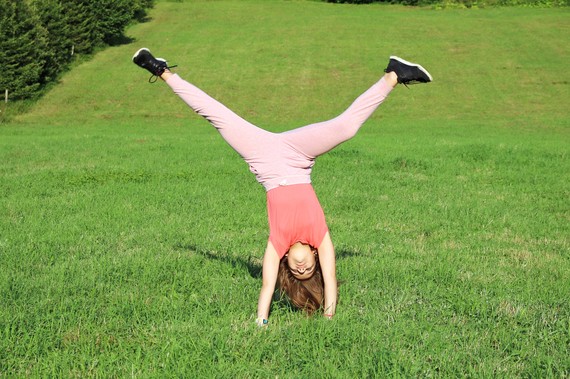 I was excited to think that those young girls were going to hear two of the most significant women in history promise a future that would protect their right to choose and their lifestyle choices. They would be encouraged to envision a future that would offer an affordable education, quality healthcare and the opportunity for equal pay for equal work.

A tender nostalgia crept over me, but it was rooted in more than just my desire to turn a cartwheel. I had lived with each and every one of those assurances during my college years and throughout my professional career, and I had built a stronger life as a result of believing in them. Looking at those girls, I realized I wanted them to have everything I'd had.

I was coming of age during the radicalization of the Feminist Movement, and I embraced women's new-found freedoms that were hard fought for and won by women like Betty Friedan and Gloria Steinem. I graduated from high school in 1972, the same year that "I Am Woman," the feminist anthem, was #1 on the charts. 1972 was the year in which it finally became legal for a doctor to prescribe birth control pills to unmarried women. That was followed by the Roe v. Wade Supreme Court ruling in 1973 that gave a woman the right to legally terminate a pregnancy. Unlike generations of women before me, I could make love with the young man I dated throughout college without the fear of an unintended pregnancy that might derail my getting a degree. I knew I could then forge ahead into a meaningful, well-paying career. I knew I had choices.

I grew strong from the Feminist Movement because I was assured that I could do anything, be anything, and have anything I was capable of dreaming of and working for. It was about freedom of choice in so many areas of my life, and I took full advantage of those privileges and freedoms.

And now there I stood, 44 years later--a damn long time--excitedly waiting to hear the woman who will become the first woman president of the United States assure a crowd of 11,000 that rights so hard-won nearly half a century before, would be championed and strengthened under her presidency.

As inconceivable as it is that we are One Misogynistic Man away from losing freedoms, choices and hopes in 2016, it is a reality. The fiercest assault on Roe v. Wade since its inception is upon us with Trump and Pence. As Hillary said in the third debate, "We've come too far to have that turn back now."

Sure, it's discouraging that we're still fighting a battle that was seemingly long ago won. But the ghosts of those who would "make America great again" have never rested. They have continuously risen like goblins from a graveyard to haunt us. They try to scare us with their undertakings to subjugate women's rights, to escalate racism and to put white men back in the role of dominance and superiority that they found so comforting in the 1950s.

Standing between those ghouls who would steal our diverse souls is the woman whose time has come. A woman who, at a most pivotal time, will become president of a country that was conceived in freedom and equality, but that has been weighted down with chains of bigotry and chauvinism for decades.

What I believe about the American Spirit is that it can only be pushed around, weighted down, trod upon and disrespected so long; but then, inevitably, that Spirit will emerge with a fierce roar, bellow "Enough!" and fight back with ferocity. 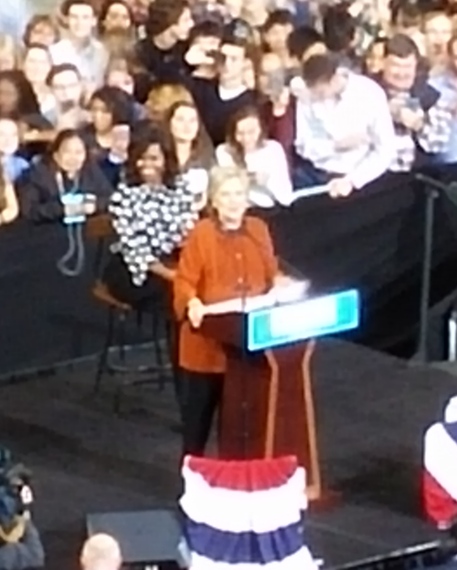 We are there now. We are ready for battle, and Hillary is our chosen leader, our collective strong voice. She, too, was in the thick of the Feminist Movement, and she used every advantage afforded women during that time to get a great education and use her formidable intellect and energy to make a better world for women and children.

Though she has been working tirelessly for decades, she is now coming into her ultimate power. She has, during this election cycle, led the mother-of-all-battles for strengthened rights and basic human dignity.

Some may say it's too late to regain our feminist foothold and build a future that is even brighter than our past. But from the looks of hope, the voices of excitement and the charged emotions that infused the crowd, it was evident that there is a huge power surge behind the belief that we can, and will, be stronger than ever.

But as both Hillary and Michelle strongly emphasized, it happens with our votes. Michelle said, "Now we need to do our job, and get her elected president of the United States." She reminded us that, "In this country, the Unites States of America, the voters decide our elections, they've always decided who wins and loses--period, end of story!"

Please, take that to heart, and take action. Vote!

I can't remember feeling so inspired, so optimistic or as proud as I did listening to these two awesome and beautiful women! As they left the stage, I felt so invigorated that I did mental cartwheels, one after the other. It wasn't the same as doing them for real, but it did the trick.