This past Tuesday, at the White House-convened United State of Women Summit, I was on energy overload. It was a day of inspiring speeches by on-the- ground trailblazers and the thrilling moment when President Obama called himself a feminist. Yet for me, the most exciting, kick-off news was this: The White House made visible its "Equal Pay Pledge".

28 companies, many household names, so far have signed on to The Pledge. Yes, government has, in two words, stepped up. Power has now been brought to the problem.

My bet is that the Equal Pay Pledge will have more widespread success than the Lilly Ledbetter Fair Pay Act.

Why? Because the Pledge taps into the competitiveness of CEOs. They will want to belong to a group that is publicly known for doing what is right. The same happened when the Giving Pledge provided similar opportunity for the ultra-wealthy.

I am reminded of why the 30% Club, started by the dynamic leader, Helena Morrissey, in England (and now with a strong presence in the US as well) succeeded there, accelerating female representation on public company boards.

In 2010, Morrissey used the same strategy. She enlisted the support of Lord Mervyn Davies, a leader of the British House of Lords, to persuade CEOs, that competitive breed, to join a prestigious, public group by declaring to add women to their boards. Power was brought to the problem. Then there was action. "Yes, our company commits in public to make a positive change".

The Equal Pay Pledge relies on power addressing the problem too, - Presidential power and then CEO power.

CEOs are signing on (Here's the link:
https://www.whitehouse.gov/blog/2016/06/14/businesses-taking-equal-pay-pledge). They review compensation of employees with like-jobs. When they discover discrepancies, they remedy, some even overnight. Other CEOs, the fortunate or the forward-looking ones, find no gender pay gap...to the penny. CEOs are using their power. More and more will sign on. The US government is on our side, using its power to urge action and create a fairer America.

We can spread the word and ask companies where we work ,or in which we invest, to take the Equal Pay Pledge. We can support our 44th President in this effort and soon our 45th.

The Equal Pay Pledge, with its appeal to the pride, competitiveness as well as decency of individual CEOs will ignite more companies, especially if we all demand this, to achieve the simple goal which has so far eluded other legislation: equal pay.
I am optimistic. 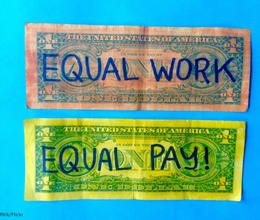