An interview with Congresswoman Estela Hernandez of El Salvador 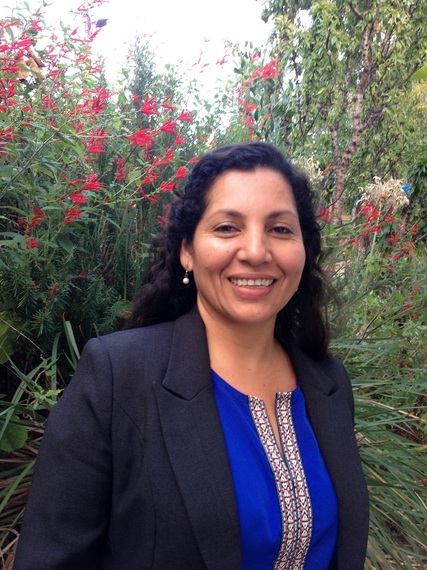 Estela Hernandez is both a member of the national assembly and a leader in the transformational social movement, La Coordinadora of the Lower Lempa and the Bay of Jiquilisco in rural El Salvador. Here, Hernandez talks about a radical vision and practice of direct, participatory democracy by the citizens in the government of the Farabundo Martí National Liberation Front, or FMLN.

Beverly Bell: Please give us your vision of power.

Estela Hernandez: Well, for us power is holistic. It is completely rooted in the people. There is a lot of wisdom in people, and so what leaders have to do is be with the people, listen to the people, and address the issues that the people raise, because together, we collectively build the alternatives that actually work. Anything that is done from an office is not going to coincide with reality. So we're building from the people up.

That characterizes the organization where I received my education, La Coordinadora. Our strategic development plans arise from huge assemblies. We can spend up to six months building our strategies, because we need input from all sectors and communities. This plan must work out for us, but it's also important that it is taken up at the national governmental level, to inform the administration's five-year plan. During the last term [of Mauricio Funes of the FMLN, 2009-2014], the government launched the open social dialogue and heard from different sectors: peasants, industrialists, academics, community development associations, water committees, environmentalists. What progress the government made was because of what the people said.

And this present administration has done the same. First, there was a kind of assessment: "Let's check what didn't work during the first five-year term, let's check to see what things we should not continue to do, let's see what things we have to consolidate, and what new things we have to initiate." So now [a government plan created through a second open social dialogue] is being validated through the Ministry of Internal Affairs. The Right is questioning how it's possible that months have already passed under the government of Professor Salvador Sánchez Cerén, our president, and there's no government plan yet. But that's because no academic think tank provides the government with a plan; it comes from the grassroots, and that takes time.

BB: How do you see your role in the national government vis-à-vis your responsibility to your community?

EH: For me, they're closely related. Being civil servants, we have to do our political work with our feet on the ground. My role is to bring the demands and needs from the communities to a macro level, into the public policy arena.

The communities are the driving force behind legislative reform. I sit on the Environment and Climate Change Committee, and the Agriculture and Livestock Committee, because they are the two that deal most with the issues that concern us as the community level. The communities raise an issue, and I present a bill and push it in the committee. Then I go back to the community and I tell them, "Look, this is what's happening, we have votes for this. For this other thing we don't, because they say that we also have to conciliate the interests of the Right." We need to keep people informed and how to fight the fight, because we also need people's backing in the legislative assembly when the Right says no to an issue.

BB: You go back and forth from the capital to your community to find out what your constituents want?

EH: I still live in the community I come from. We have a very small country, so it takes only takes one hour from [my home in the department of] Usulután to San Salvador, and that lets me maintain my connection to the people. Holding political office doesn't make me into someone of another social stratum; I continue to be from the community. Living there lets me have constant and fluid communication with them.

If we're not in permanent relationship with the people, we distance ourselves. There can be legal and formal representation, but it's no longer true that we are legitimately representing anyone. And when that's lost, we stop contributing the way we should to the region that sent us to fulfill a mission.

EH: We have a government that is, for the first time, responding to the great majority, treating them with dignity.

First, we had a transitional FMLN government [of President Funes] which set a very solid groundwork for responding to the historical debt that this country has had to the large majorities. There's been a great emphasis and investment in social programs that actually reach the majorities.

There's been a lot of progress toward health care reform, for health care that's accessible to all Salvadorans, even if they live in the last lost corner of our country.

There's also been big advancement in education. The number of children in schools has increased, though the structure hasn't been able to grow quickly enough to keep up with enrollment. Children are now provided with school supplies, and its small-scale bookstores which provide these to the government.

A program to provide boys and girls with uniforms brings some dignity to the children: one used to see children come barefoot with torn shirts, and those children would be mocked, so they are getting uniforms and they can feel the same as the others. That has been a project filled with love. Co-ops in the different communities manufactured the uniforms, opening up sources of income to tailors. Children are also provided with shoes, in a project that has brought income sources to craftspeople who were left without jobs when transnational corporations started exporting much cheaper shoes to our country. Now the government's goal is to provide that school package [books, supplies, uniforms, schools] at the high school level, too.

The government has also approved programs to inject resources into small- and medium-sized companies, which never happened before.

We also have a family agriculture program, going back to how we used to farm, that has been so successful that we're now able to produce all the corn that we need in our country; we no longer depend on imports for staple foods. We've fought a hard fight against the multinationals, because before it was Monsanto that provided farmers with agricultural packages. Now it's small co-ops that produce the inputs we need for family agriculture. Monsanto is using its influence in order to reverse the ban, so the government is now going all out in support of the farmers and peasants.

We still don't have the marketing mechanism to fulfill our national potential because it's very complicated to fight against the Central American Free Trade Agreement. But there's a great productive potential for beans and vegetables and other things, especially those produced by co-ops.

We also need to see how to face the machinery of foreign governments and transnational corporations, which don't want the government to develop in a sovereign manner. We're still not sure how we're going to get out from under this, but what's certain is that it must be done by diversifying our political relationships, not having a relationship with only one country.

BB: Please talk a little about gender in the national government.

EH: The FMLN is the only one that nominated, as a party, female candidates. The other political parties? All men. They've always thought that women are not capable, and that if we hold a position it's because, well, we've been romantically involved with someone. We have to counter this over time, and become self-confident and self-assured, and earn respect in these positions.

In FMLN statutes, a minimum of 35% positions must be held by women. But not in the other parties. And we are the party that brings the most women into the national legislative assembly.

BB: Do you use the term mandar obedecer, order and obey, to refer to accountable leadership, as the Zapatistas do?