October is National Pizza month, and if there's one thing our economic slump has not stopped, it's America's love of pizza.

In honor of National Pizza Month, I thought you might enjoy some facts about the pie made famous by the Neapolitans.

All those statistics go to show the power of the pie. And with all that impressive information, I was wondering just how many people make their own pizza at home.

So far, I have not been successful in finding out that information. But as someone who has always made pizza from scratch, I can tell you that it is simpler than you might think.

Flour, water, yeast and salt, (economical ingredients) begin the life of the pie. It takes too much time to make you say? What about all that rising? You can forget all that because Fleischmann's (one of my sponsors) has come to allay your fears with a new pizza crust yeast that requires no rising.

Mix it into flour, water and salt and form a dough. You can do this in a bowl or in a mixer. Then pat or roll it out with your hands and top it with whatever you like. Bake.

It is that simple, and in about 30 minutes, start to finish, you can be enjoying pizza from your own kitchen instead of a frozen variety bought from the supermarket or delivered to your home for a hefty price.

Now that is power. 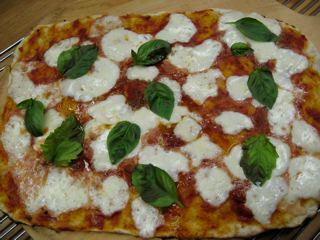 Preheat the oven to 400F

Combine 4 cups of flour, salt and yeast in a large bowl or food processor.

Add the water and olive oil through the feed tube until a ball of dough forms. If more flour is needed add it a little at a time until the dough comes away from the sides of the bowl

Knead the dough a couple of times until you have a soft ball of dough that is slightly tacky but not sticking to your hands. Divide the dough in half and roll each half out on a floured surface into a 9 inch diameter. Place the dough on a lightly greased baking sheet or pizza pan.

Top with your favorite toppings and bake untl the bottom crust is nicely browned.

Enjoy this and other great Italian recipes at CiaoItalia.com!

Food Pizza
This Blogger's Books and Other Items from...