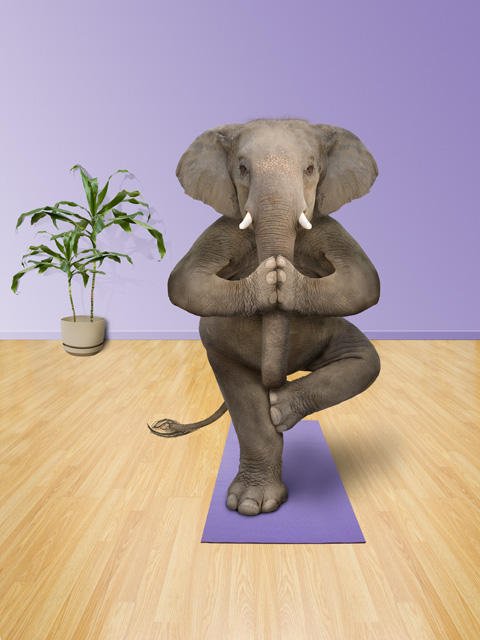 Consider this your lucky day. I'm going to let you in on something that can ease stress, heal old injuries, protect you from new ones, burn lots of calories, and demand less than two hours a week. No, it's not that. I said two hours, not two minutes. I'm talking about Power Yoga, the title of a book by Beryl Bender Birch. I figure any woman whose middle name is Bender, must know her yoga.

Like the chicken soup stock in my great-grandmother's freezer, yoga has been around for centuries. We all suspect that yoga is probably good for us, but we're no doubt put off by our belief that there's some mystical, Eastern aura to it, that it's taught by long-bearded swamis with unpronounceable 17-syllable names, and that it involves twisting our bodies into configurations seen primarily in the video section of Lou's Hot & Nasty Hardcore Emporium.

While all this is true, yoga nonetheless has a strong U.S. following--6 million, according to the latest Roper poll. Which raises the question, who is this Roper person, and where does he or she get the time to interview millions of people about their yoga habits? But I digress. Power Yoga is based on a unique program Birch has been teaching at the prestigious New York Road Runners Club for 15 years. That's the club that trains runners to dash up to you, do something annoying, exclaim "Beep-Beep!", and sprint away.

Power Yoga is drawn from a branch of classic yoga called ashtanga, which, loosely translated, means, "Oh, dear Lord, that hurts!" In a typical Power Yoga session, there are no pauses between the poses. It's just one continuous, heart-pounding, heavy-breathing, sweat-inducing session--kind of like prom night, but without all the heaving from consuming apricot brandy and Cheetos.

There are a number of intriguing principles behind Power Yoga, all of which you should hear now, because once you start the exercises, you'll be in far too much pain to retain information. One principle is that sports get us out of shape as much as they get us into shape. That is, you can be strong from lifting weights, or aerobically fit from running, but still be tight and injury-prone because of the one-dimensionality of your workouts. This illustrates one of the foremost tenets of Power Yoga--belittling all other forms of exercise.

Another principle is that stretching (i.e., two or three quick exercises before a workout) is a waste of time, since muscles must be warm to be malleable, and generating this healing heat is what Power Yoga is all about. Furthermore, those who attempt short-cuts to the healing heat, by rubbing Ben-Gay all over their bodies, are not only cheating themselves, but are also referred to as ashtanga-badanga, meaning "pathetic grease-monkeys, unfit to lick our incense ashes."

Before trying the program, it's important to learn deep, controlled breathing. Those of you who've made obscene phone calls will be that much farther ahead of the others. Hook your thumbs over your belt and place your hands on your lower belly. Inhale through your nose and expand the abdomen. Then exhale through the nose and contract the belly. Now, repeat over and over again the mantra, "O-WHATAHGOO-SIAM"... O-WHATAHGOO-SIAM"... "O-WHATAHGOO-SIAM." Do you realize what you just said? How many of you fell for this second grade prank? Let this be a lesson to those who think that yoga can't be fun!

Still skeptical? Practitioners of Power Yoga include Kareem Abdul-Jabbar, Sting, and the men's varsity swim team at Columbia University--all of whom will be appearing together in the new, yoga-themed, NBC sit-com, "Who's The Swami?"

So, what do you say? Ready to give it a try? Hey, come back here! At least listen to these hints for a more productive workout:

* Your exercise clothing should allow for complete freedom of movement. If you wear pants, they should be loose enough for a sheep to fit in them with you. That, however, is another sect known as baa-baa yoga.

* Keep your attention fixed on what you are doing. If you find your mind keeps wandering to your upcoming plans to scale the White House fence, perhaps you should stop, and then return to yoga when you're in a calmer place.

* Poise and balance should be maintained at all times--or at the very least, spitball fights should be kept to a minimum.

* Don't expect yoga exercises to solve emotional or personality problems. If you're a jerk, you can still do yoga; you'll just be a more fit, centered jerk.

* Do the recommended exercises at least three days a week. Doing them three times a day generally means you're far too eager to impress the varsity swim team at Columbia University.

* If you're doing the yoga exercises in the nude and weigh more than 250 pounds, be considerate enough to close the front curtains.

* Remember that deep relaxation is a duet of the body and mind in repose--as distinguished from Deep Chocolate, which is one of the Haagen-Dazs premium flavors, and provides many of the same benefits as yoga.

* For better balance, concentrate on your breathing and gaze out at some fixed point, such as the neighborhood children looking into your window and giggling.

* Don't get discouraged. Much like applying for unemployment, it may take four weeks to start realizing benefits.