Besides being reminisced upon by nostalgic millennials, '90s cartoons share a few distinctive qualities.

Most are fast-paced and feature an animation style that incorporates thick lines: think "Courage the Cowardly Dog" and "Ed Edd n Eddy." Those that center on crime-fighting -- like "Dexter’s Lab" -- have little focus on the individual characters’ personalities, and instead zip from conflict to conflict. They’re all a little weird, and are beloved for that reason; whoever dreamt up the premise of "CatDog" or football-headed Arnold must’ve had a wild imagination.

Fans of "Rocko’s Modern Life" or "Aaahh!!! Real Monsters" may wonder whether today’s cartoons have the same odd charm. The answer -- as you’re sure to know if you’re a current cartoon-watcher -- is yes. But today’s shows have their own quirks. When faced with the sometimes too-real competition presented by CGI alternatives, those animating the old school way are finding new means of justifying their hand-drawn art. Bigger worlds, more character-driven stories, and more expressive characters are all part of the mix.

This is especially clear when comparing the '90s and aughts version of "The Powerpuff Girls" with the show’s remake. In the first new episode, Buttercup, always the more rough-and-tumble sister, rushes on screen, a tuft of hair signifying her burliness. Through her dialogues and her expressions, it's clear that she feels isolated by her girlish pals. So she makes new friends, goes roller-derbying, and her siblings lament her absence -- all of which is to say that the show covers new emotional ground.

The Huffington Post spoke with the team behind the reboot, including writers Jake Goldman and Haley Mancini, Art Director Eusong Lee, and Storyboard Artists Cheyenne Curtis and Julia Vickerman, about how the show, and cartoons in general, have evolved.

The stories are more character-driven…

"For stories and shows to evolve, you should always be growing out the world," Goldman explained. He compared the changes the team made to "The Powerpuff Girls" to the evolution of "The Simpsons" from a quirky, family-centric cartoon to a fascinating, full-blown community. Rather than sticking with the closed world of the Simpsons’ house, the creators expanded well beyond it.

Goldman added, “[The Powerpuff Girls] were essentially just three little girls always on their own. From a storytelling standpoint, that’s incredibly limited. I think you can feel more about who they are individually when you put them out in the world. Buttercup has friends who Blossom and Bubbles don’t get along with, like any sisters. It’s something that evolved from the stories we tell now on TV versus the stories we told 10 years ago. There’s a lot of fertile territory, I would say.”

… And the characters’ individual quirks matter.

Vickerman said that making the Powerpuff Girls strong in individual ways was “tricky.” “They kind of always look adorable, because their eyes are so huge,” she said. “Because of their proportions, their little Hello Kitty bodies and their giant exaggerated anime eyes that are so expressive. Even if they’re saying threatening things to a bad guy, they always look so adorable. They never completely get outside the realm of cute.”

But, as a storyboard artist, she’s worked to give each of the characters more individuality. “For Buttercup, when she’s angry her hair will get pointy, and she has these powerful stances and poses. With Bubbles, when she has her cute moments her eyes get big and they’re full of glitter and sparkles,” she said. “Another thing we’ve been utilizing more in the reboot is making shapes appear in their eyes, like rainbows appearing in their pupils, or stars or skulls. The teams have been having a lot of fun with that. We’re almost using them as mirrors or TV screens in certain sequences, expressing their emotions.”

The style is smoother, and less “zippy.”

Lee, the show’s art director, said he appreciates the unique look of '90s cartoons. “At that time a lot of it was very graphic. It feels like a graphic design or a very beautifully designed picture,” he said. “But my goal always was to make it a place where you want to feel welcome. Coming from that '90s style, which was very flat and line- and shape-based, we tried to expand it to more lighting-based, and a lot more comfortable with depth and more sense of a place.”

He added, “In the '90s, because of the thick lines and the graphic flat shapes, things were a lot more zippy and a lot faster.” In the original show, Lee points out, the viewer rarely sees the Powerpuff Girls walking -- they’re always flying or battling. “A lot of whip-crack, dramatic pose extremes,” he said. “But in this reboot we tried to give more personality, and their emotions in their motion.”

“We added a lot more friendly characters, which isn’t very common, if you look at the old episodes,” Mancini said. “We just tried to expand the world because storytelling has changed. As opposed to any of the cartoons of the '90s and early '00s, storytelling has evolved a lot, and you get more of an arc in an 11-minute show than you used to.”

“The reasons we really enjoyed putting friendly faces in with the girls is to show that there are so many wonderful experiences you get as kids," the writer said. "It’s just funny, and we get to see the games they play together, and really get the whole kid community, the kid world.”

How Have Cartoons Changed Since The '90s?
Young Celebs If They Were Cartoon Characters 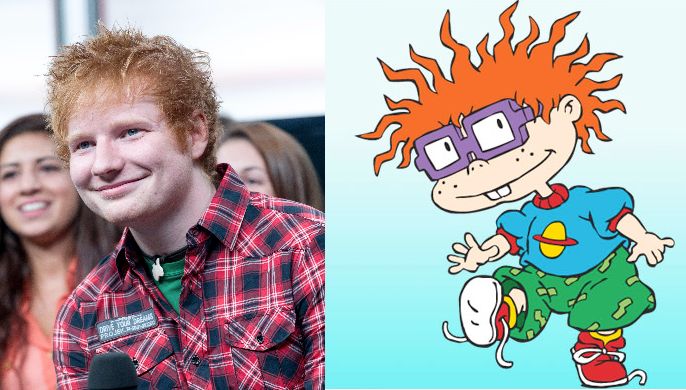