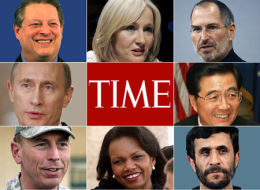 Tomorrow's the big day: On the "Today" show tomorrow morning, Time's Rick Stengel will announce who the vaunted "Person of the Year" is for 2007. To which we say a resounding: YAWN. This may be the LAMEST field of nominees ever — and if you don't believe us, just ask Time by way of the most lukewarm, unenthusiastic descriptions to ever run on a website.

Consider this ringing endorsement of finalist General David Petraeus: "Brought a measure of understated competence to the war in Iraq." Wow! Congratulations on that understated competence, dude! What a year you've had! Or how about this "Con" for Vladimir Putin: "Nearing the end of his Presidency and remains a figure of menace to many of his own citizens." Um, is he gunning for "Nice Guy of the Year?" Nosiree; that "menace" is one of the reasons he is influential — because he rules a giant, sprawling, nuclear-empowered oil-producing dissent-squashing nation that also happens to be so much under his thumb that "end of his Presidency" actually doesn't really mean much.

Al Gore? Feh, he's so 2006. (This despite the fact that his influence has been proven — and backed up by more shocking, scary evidence — in 2007). Mahmoud Ahmadinejad? Well, he sure knows how to, um, get attention, even though he may not actually be that powerful (so, by this definition, Britney Spears is POY material?). Condi Rice? Giving the Middle East one more kick at the insoluble can. Congrats on all that influence, girlfriend! Steve Jobs? "Not exactly a figure of global change. He's a businessman, albeit a great one." Then why is he on this list? J.K. Rowling? "Hard to argue she was the most important person of 2007." Oh my God, I don't even have to ask why she's on the list, Time is doing it for me! Wow, could Time hate its "Person of the Year" list any more?

In fact, based on these pathetic, not-even-faintly-praising write-ups, here's who I think the person of the year is: Hu Jintao. Why? Because Time seems least disgusted with itself for the choice: "Pro: The most powerful man in the biggest country in the world, he's shaped China into the wellspring of global consumer goods. Con: Communist party reshuffling apparently scaled back his power somewhat, and factory recalls have tarnished China's image as a trustworthy manufacturer." That, of course, is not even close to the most compelling reason why the guy at the helm of freaking CHINA might have had some pull this year. That actually goes for all of the above.

It's clear that the big global story this year is....the globe, obviously. But after last year's You-fest, Stengel apparently wanted the Person of the Year to be just that, a person, so Mother Earth was out of luck. As a person, Gore definitely has the enviro-chops (even Stengel said so on "Today," a helluva lot more enthusiastically than his magazine) but after Oscar and Nobel, he feels a little played. Jintao is the next best thing, since China is the biggest emitter of C02 in the world ( as Mitt Romney likes to say), and what it does to address the catastrophe-waiting-to-happen that is the environment could arguably make or break Earth's final struggle. Also, there's the matter of those toys. Either one, really. A Gore-Jintao ticket? Dare to dream!

As for the others: Petraeus was a prime actor but not a prime mover; Putin and Ahmadinejad only really work as part of a triumverate (toss in Musharraf, though, and "Crazy Foreign Dictators" has some sizzle!); and, wondrous though J.K. Rowling is, Hogwarts is, alas, not real. It's Jintao's world, we're just going to slowly die in it. Happy POY day, everyone!