Even though we've whined time and again about the ubiquity of designer collaborations, we think we may have just gotten our diffusion line mojo back with Target's latest partnership: Prabal Gurung.

That's right. Prabal Gurung -- as in, Kate Middleton's avant-garde designer of choice -- is giving America an affordable taste of his signature eye-catching prints and bright colors with a limited-edition collection of ready-to-wear, handbags, shoes and jewelry for the mass retailer.

The 80-piece collection will range in price from $19.99 to $199.99 for apparel and $12.99 to $39.99 for accessories. If Target's last collaboration with Jason Wu is any indication, people may be rushing to stores to scoop up the entire stock in one go (which is really uncool, by the way, and something we would totally frown upon). And who knows? Michelle Obama wore a Jason Wu for Target dress, so maybe she'll wear one of the Prabal for Target frocks, too.

The collection will be available in Target stores and on Target.com Feb. 10 through March 23, 2013 -- just in time to find a cute statement dress for Valentine's Day. The timing wasn't lost on Prabal either. According to the designer, the collection is inspired by love. “My own collection is also inspired by the idea of emotion and all of those things,” Prabal told Vogue. “Since this is coming out in February, I thought it was the perfect fit.”

But even though we were able to muster excitement for this designer collab, we're still on the fence about how we feel about every designer in existence lending their aesthetic to mass-produced, sometimes-lackluster lines. Even Prabal agrees with us. Well, sort of.

“It’s almost like a rite of passage for new, young designers,” he says. “You know what I mean?”

You have a couple months to mull over this issue until Prabal Gurung for Target hits stores. In the meantime, you can peruse the more imminent Target + Neiman Marcus/CFDA holiday collection. If that's your thing.

Until the full lookbook is unveiled, check out a sneak peek of Prabal Gurung for Target below. What do you think of the look? 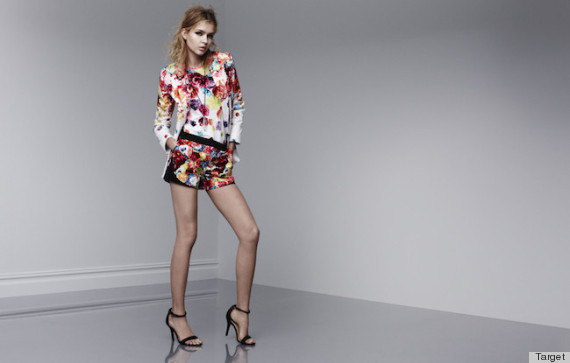 Still not tired of designer collaborations? Check out some more!

A History Of Designer Collaborations