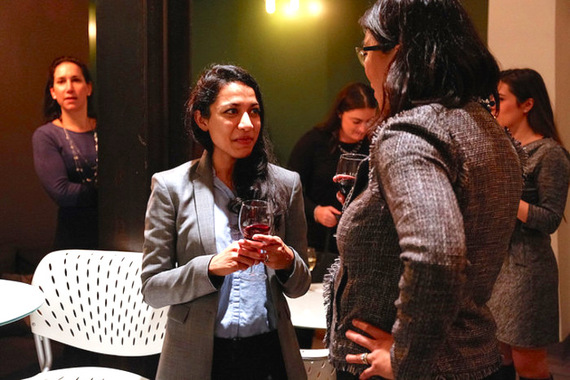 Networking was such a foreign concept to me. And I really do mean foreign -- we don't do the organized networking thing in El Salvador. I knew that building relationships was an important tool for success, that who you know matters; in fact, in small cities and countries, it's sometimes the only thing that does. But the concept of going to organized networking events, with an agenda, and a clear expected outcome in mind, seemed crazy.

When I started business school I couldn't believe how good some people were at networking. They enjoyed it, it was natural. They were making connections and getting jobs. Me? Not so much.

When I asked people what the secret to successful networking was, the answers seemed to be always the same, and went something like this:

Simple? Well, not really. The problem starts when you're an introvert like me. Approaching people confidently in a crowd of overconfident, type-A business professionals is not so easy. Asking thoughtful questions? Hmmmm yes, that's not that hard, but you have to do it quickly before you lose your chance. And you can't stress about it. And how can you be genuinely interested when you might be bored to your very core?

The thought that networking would be one of the most important aspects of my career never occurred to me. It wasn't until much later that I understood what people were saying. The problem wasn't that I was a bad networker, it was that I was following a recipe that was just not made for my personality.

It took me years to find the type of networking that works for me. It's more natural, more organic. It doesn't happen in large settings, and usually doesn't involve me thinking up questions in advance. And it certainly does not make me have an anxiety attack because I'm worrying about being interested and interesting.

Don't think networking events are the only place you can network. Heck, don't think in person settings are the only settings, either. There are many online resources for networking (like our very own Inner Circle at Ellevate, or those offered by our awesome friends at Glassbreakers or OWN IT) and some people (like me) might just feel better on the other side of a screen for a while.

Learn how to continue to grow your network relationships after making the initial connections.

Maricella Herrera Avila is the Director of Global Membership at Ellevate. She joined the former 85 Broads team back in 2012, shortly after earning her MBA at Columbia Business School. In her role, Maricella oversees the delivery of current member benefits while paving the road for future opportunities within the organization.