With the close of Paris Fashion Week, the ferocity and fabulousity of Fashion Month has sadly come to an end. However, the style and excitement is living on through Pratt Institute's "Black Dress: Ten Contemporary Fashion Designers" exhibit.

Co-curated by Pratt Institute fashion professor Adrienne Jones and pioneering art dealer Paula Coleman, the exhibit which is being housed at the Pratt Manhattan Gallery is an exquisite celebration of black designers. While the runways of New York, London, Milan and Paris are lacking the type of diversity we crave, Pratt has pulled together a fulfilling retrospective of creations, from past and present designers of color, that will definitely feed any fashion-loving soul.

The show, which opened during New York Fashion and runs until April 26, highlights fashion heavyweights like Tracy Reese, Stephen Burrows and Byron Lars, as well as up-and-comers like LaQuan Smith and Omar Salam.

"It's important because of the visibility, or lack thereof, in the fashion industry when it comes to black designers," Jones told The Huffington Post. "We are a power to be contended with and we've basically been ignored."

Although there are only ten designers included in the exhibition, Pratt pays homage to nearly 150 black designers who are largely unknown by listing them on giant scrolls.

"The black community has such a great history, and also a great history in fashion that has largely gone unheard of and unspoken," Jones added. "But we are here, we have always been here and we aren't going anywhere."

If that isn't enough incentive, here are four more reasons why "Black Dress" is a must-see:

1. World-renowned photographer Carrie Mae Weems created a video specifically for the exhibit.
2. Designs from former “Project Runway” contestants Epperson and Samantha Black of Sammy B are showcased.
3. There is a dress by Harlem-based designer Donna Dove that is made from over 50 men's dress shirts. #Amazing
4. The pride and warm fuzzy feeling you'll get from supporting designers of colors! 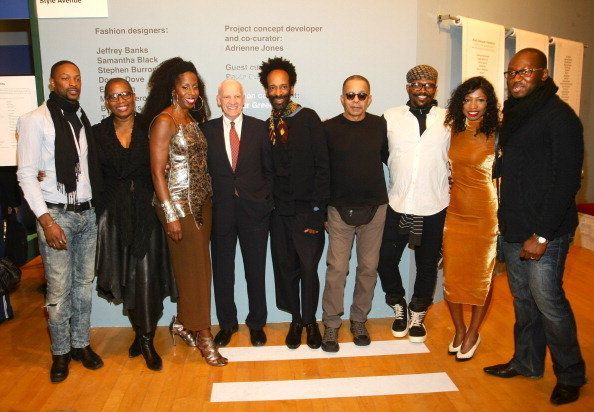