Therefore confess your sins to one another, and pray for one another, so that you may be healed. The prayer of the righteous is powerful and effective.
-James 5:16 (New Revised Standard Version)

Last night I attended the yet another vigil for black victims of police violence in the United States. Since the death of Trayvon Martin in 2012, these memorials have become ritualized spaces for expressing deep lament and righteous anger against the death-dealing consequences of our nation's systemic criminalization of people of color. The gentle flicker of candlelight illuminating our faces, we stood together as a multi-racial coalition of mourners over one thousand strong. The anger in the space was as palatable as the sorrow; twin emotions mirroring the fatality fatigue that builds up over time. A terrible psychic toll is taken from watching public executions of black people go viral as someone's son or daughter bleeds out in front of our eyes each time taking a piece of our soul, each time taking a piece of our sanity.

It can seem never-ending. As a young black woman, I have felt the impact of the continual assault of these images on my spirit. A year to the week of the one-year anniversary of the massacre at Mother Emmanuel AME Church, 49 black and brown queer lives were ended by a deranged gunman at Pulse Nightclub in Orlando. The two are a painful echoing reminder that for people of color even our sanctuaries can be rendered unsafe.

Less than a month later, we found ourselves holding candles and mourning the latest human sacrifices on the altar of white supremacy. Together, we cried aloud the names of Philando Castile and Alton Sterling, two black men killed by police officers within 48 hours of each other last week. We remembered the brave members of the Dallas Police Department who were brutally murdered protecting peaceful protestors. We chanted the name of Sandra Bland, a young black woman, who one year ago this week was found dead in a jail cell after being arrested for failing to signal when changing lanes. Finally, we prayed. Some prayed in silence while others prayed in the form of chants and songs into megaphones.

There have been times over the past several years when I have been asked to lead prayer at memorials and vigils like the one I attended yesterday. I am a clergywoman who refuses to silence my rage against institutions and peoples within our nation who believe black life is disposable. It is a rage born out of deep love and I will not, in the words of the Apostle Paul, let the sun go down on my anger until justice is served (Ephesians 4:26). Justice in this context means a society in which all people, regardless of the color of their skin, are living in conditions that allow them to flourish.

As a Christian, I believe that prayer can a transformative tool to move people from a state of complacency to one of active engagement. However, as I reflect on the events of the past week, I am troubled by the way in which petitions to God can be turned into platitudes as part of cottage industry peddling in public displays of grief. The refrain I most often here is this: "pray for the victims". Across the ideological and cultural spectrum, no four words are more consistent as a response to national tragedy than these. Often what we mean is pray for the comfort of the victims and their families. Pray that they be released from the pain that trauma inflicts. Rarely, do these prayers for the victims include a call to end the systems that brutalized them in the first place. 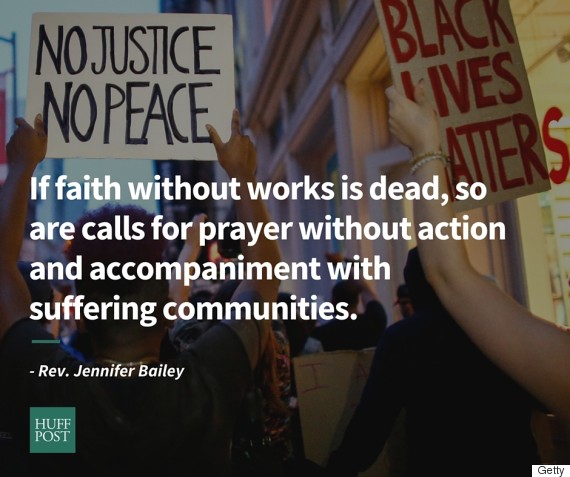 I have come to believe that prayers for victims of state violence that are devoid of penitence are empty. I wonder how our actions might be different if instead of praying for the victims we allow the prayers of the victims to guide our response. This week I felt the hot sting of tears roll down my cheek as I watched the video of Philando Castile take his last breaths. As an all too familiar pain pierced my gut, I heard an unexpected sound. The sound of prayer. It uttered from the lips of Castile's girlfriend Diamond Reynolds as she watched in horror as the love of her life bled out in front of her eyes and the eyes of her four-year-old daughter. Let us hear the words her prayer in its fullness now:

We are innocent. These words continue to haunt me. I hear her impassioned pleas for intervention. Intervention into a world where innocent people who know their rights can still be killed. I hear her moans as a clear call for justice. If faith without works is dead, so are calls for prayer without action and accompaniment with suffering communities. Rather than only praying for victims after tragedies, our real work should be to dismantle the conditions that allow for such traumas to persist. The first step is to listen. If we truly heard Ms. Reynolds' anguished cry we would be summoned to a righteous anger that like a fire shut up in our bones would not let us be (Jeremiah 20:9).

Lord, in your mercy, hear their prayers.