Even as the Confederate flag is removed from the South Carolina Statehouse grounds, shock waves are still echoing off the walls of our institutions after the June 17 Charleston Massacre. The funerals are over and people will carry on, but one must wonder, will their deaths change us? Are they martyrs for the cause of racial justice, or just nine more black victims of racism? 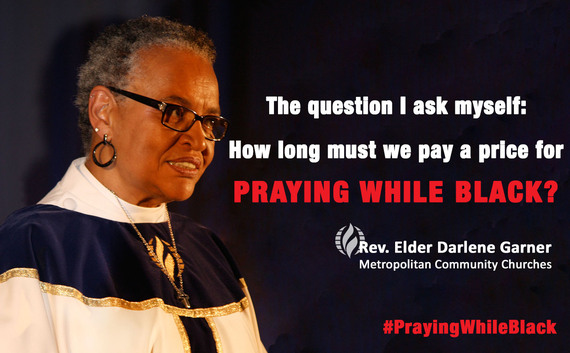 Unless the country rises up to challenge these murders, the burning of black churches, the death threats to black women ministers and the daily indignities and systemic oppression of people with brown and black skin, the answer is clear.

Let us call the roll.

They were all brutally murdered for praying while black as they gathered in the sanctuary of Mother Emanuel African Methodist Episcopal Church.

The confessed murderer of the nine African-American men and women is a young white man praised by the Ku Klux Klan and other white supremacist groups.

Of the church fires, authorities have determined that arson was the probable cause of four of the eight fires.

Let us call the roll:

Authorities are still investigating the cause of the burnings. After each church burning, the media asks, was it arson? Was it a hate crime? Was it carelessness? Was it a lightning strike? To me, the clusters of dates show there is no mistaking the intentionality or these assaults on sacred spaces and African American people.

The question I ask myself, as a woman raised in the black church, is this: How long must we pay a price for praying while black?

Black churches have been targets of violence for a very long time. In the 18th and 19th centuries, black churches were frequently targeted because slaveholders became afraid that those who they held in bondage might get "too uppity" and start acting as though all Christians really were equal in the eyes of God and had been set free in Christ.

Since 1956, at least 91 Black churches in 17 states have been the victim of domestic terrorism through bombings, arson, and armed assaults. These did not all occur in the South; they happened all over the country in Alabama, Arkansas, Florida, Georgia, Kentucky, Louisiana, Massachusetts, Mississippi, Nevada, New York, North Carolina, Oklahoma, Oregon, South Carolina, Tennessee, Texas and Virginia.

In 1974, Mrs. Alberta Williams King, the mother of Rev. Dr. Martin Luther King, Jr., was killed while playing the organ in a black church -- yes, playing while black. I remember the atrocities, do you?

The infamous bombing of a Birmingham black church happened just two weeks before my 15th birthday. On September 15, 1963, Sunday school was underway at the 16th Street Baptist Church in Birmingham, Alabama, when a bomb exploded. The bomb had been planted in their sacred space by a white man with connections to the Ku Klux Klan. Four black girls who were just 11 and 14 years old paid with their lives and another 23 people were injured for praying while black.

Hear the roll call: Denise McNair-11, Addie Mae Collins-14, Carole Robertson-14 and Cynthia Wesley-14. I was the same age as three of the four girls whose lives were stripped from them and their families that day.

When the nightly news announced that the bombing had happened and gave the girls' names and ages, it took my breath away. I immediately identified with them. We all attended Sunday school at a traditional black Baptist church. We were in the same grade in school. We were all probably looking forward to dating in the next few years, graduating from high school, going to college and getting the best kind of job that the Jim Crow social and political systems would allow us to have. The only difference I saw between us was that I was alive and they were dead. Not just dead, but dead because they were black girls praying in a black church... just like me.

Now it is 2015, and the killing of nine African-Americans for praying while black was followed immediately by the burning of black churches in the South. Next, the Ku Klux Klan rallied to protect the Confederate flag raised first in the 1960s as an implicit warning against civil rights for black people. Remember, this was the Confederate battle flag -- not the flag of the Confederacy. Although legislative efforts went into motion to consider the possibility of removing that battle flag from public spaces, just as quickly, three black women pastors in rural churches received death threats for being women in leadership -- black women in leadership of Black churches.

All combined, these actions converged in a way that reveals a horrible truth. The price that black people continue to pay for praying, working, walking, driving, running or just standing still while black is as high today as the price extracted from black people since we were first brought to the Americas. We pay with our lives.

It is critical that we do not look at these instances of public and brutal racism as anomalies to the "American Way," but as domestic terrorism that lurks as a threat behind systems of injustice designed to keep African Americans watched and monitored every time we turn around. One misstep can lead to suspicion, expulsion, imprisonment or summary execution in church, in the streets, in a car or in the home. Police are overwhelmingly free from consequences in a culture of shoot first and act like you feared for your life later.Statistics of killings by police are not even kept on a national basis.

As Eddie Glaude Jr, Professor of Religion at Princeton University, said in a HuffPost interview with Marc Lamont Hill, "Loud racism is just the tip of the iceberg." The bombing and burning of black churches is a clear example of such "loud racism." It is bold. It attracts attention... at least for a little while. And then what? People who are not black go on with their lives while surviving black people go on praying in fear.

By looking only at the "loud" racists, people can easily think they are not racist. But daily indignities and injustices of disparate treatment, attitudes and opportunities are the foundation upon which horrific attacks are conceived and launched. Dr. Glaude noted that people who are quick to condemn church burners are the same people who are critical of change in domestic policies that would provide opportunities for education and economic development for racial minorities. These are among the "not-so-loud" racial habits that must be uprooted if these atrocities are not to be repeated.

I will continue to pray while black. I wonder if white people can bow their heads and admit that they are praying while white? That they can close their eyes and trust they will not be gunned down? That they can open their eyes and walk out into the world and trust that they will not be singled out for police action -- and that their church will be there next Sunday?

More black bodies have been buried, and the ashes washed away. People who are not black go on with their lives while surviving black people go on praying in fear. Until racism ends, praying in America will be a race-conscious act.