Adapting Garth Ennis's Preacher for television has some of the same degree of difficulty as wrestling with God, so it's impressive that after the first few episodes, the adapter team is still standing. 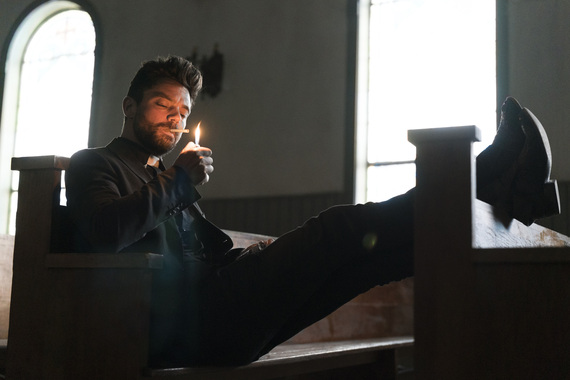 Ennis wrote Preacher back in the 1990s as a multi-volume graphic novel about Jesse Custer (above), a Texas preacher on a mission to find God and ask some of the hard questions, like, "Why?"

He's joined for parts of the trip by his ex-girlfriend Tulip and an Irish vampire named Cassidy. Both are on his side most of the time, but not all the time, as he rolls through a series of wildly imaginative adventures that careen from slapstick humor and pop culture cynicism to supernatural brushes with bizarre other-worldly beings and challenges from hard-eyed old-time gunslingers.

There's also a lot of drinking.

The novel is compelling even to people who don't ordinarily care about comic books or graphic novels, so it's been enticing potential TV adapters for years.

Everyone who tried the project gave up on it, however, until Evan Goldberg and Seth Rogen teamed up with director/writer Sam Catlin and they created a version AMC could buy.

Dominic Cooper plays Jesse, and he's got the scraggly-beard look as well as the world-weary, sometimes distracted manner. He doesn't have quite as sharp an edge as the comic book Jesse, but probably no one could. 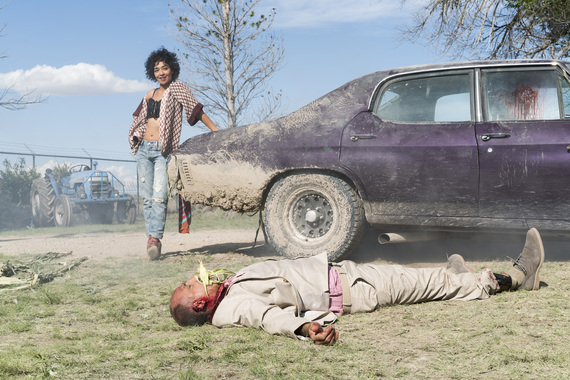 Ruth Negga (above) plays Tulip, and the writers have made her a more dangerous wild child than she was in the comic, where some of her behavior was implied. 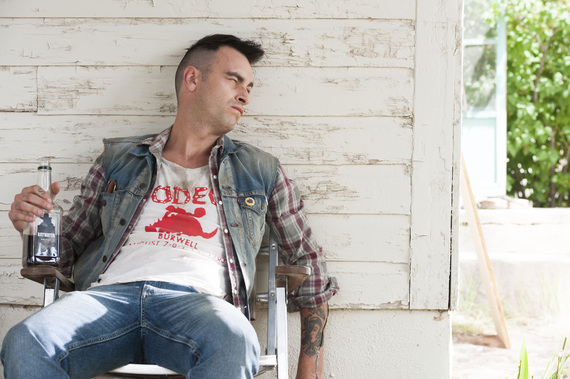 Joe Gilgun's Cassidy (above) can't quite match the striking visual image from the printed page. But he does capture Cassidy's personality, a sometimes disorienting combination of bemused and menacing.

When he decides he doesn't like a whole planeful of rich jerks, he simply kills them all, then uses a broken bottle as a spigot to draw a refreshing glass of blood.

He is, after all, a vampire. 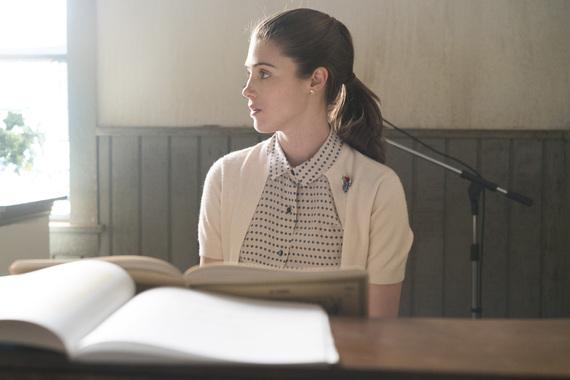 The core cast, and the early setup, are rounded out by an add-on character: Emily Woodrow (Lucy Griffiths) (above), a single mother who functions as an aide-de-camp for Jesse.

Emily is introduced as basically a good person, which would also describe Jesse and probably Tulip, but doesn't apply to many of the other folks Jesse is already beginning to meet.

One of the townsfolk in the first episode, for instance, solves the problem of a miserably overbearing mother with a response that will likely make even violence-hardened viewers gasp.

At moments like that, it may help to remember that Catlin was deeply involved with Breaking Bad.

The first few episodes of Preacher involve a fair amount of setup, sorting the story out for newcomers and making it clear to fans of the comic that the TV series will be taking some of its own directions.

It's still not a show into which anyone can slip easily. While Jesse is wrestling with the question of how to become a better preacher for his tiny and underfunded rural church, we see quick flashes of ministers in Africa and Russia running into serious consequences when they talk about prophecies.

Thrilled as fans will be to finally have Preacher on television, it may be a little too dense, mystical and at times downright puzzling to lasso the wider audience for which AMC is no doubt hoping. 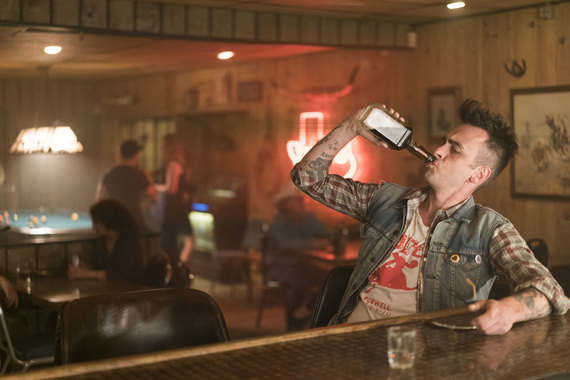 Skillfully as Goldberg, Rogen and Catlin have streamlined the comic for a TV narration, its larger quest feels somewhat abstract - unlike, say, saving the world from the zombie apocalypse.

Cooper's Jesse also starts off slightly hesitant, and while that's true to the character, at some point he'll have to step up the charisma.

But credit this team for finally getting Preacher made at all, and Jesse Custer's wouldn't be the first ministerial message to pick up fire and brimstone as it rolls along.